Scientists recently determined that an earthquake that injured more than 80 people in South Korea last year was probably triggered by geothermal energy production. Newsweek blamed it on fracking, even though South Korea has little to no oil and natural gas production. The country imports nearly all of its oil, and is one of the world’s largest importers of liquefied natural gas.

Is this another classic example of fake news? Yes, sort of – but not for the reasons you might think.

Hydraulic fracturing is indeed used for geothermal energy production, which is one of the many things for which anti-fracking advocates have never been held to account. Gasland filmmaker Josh Fox – credited with sparking the anti-fracking movement – even told the Huffington Post in 2011 that he supports geothermal energy, even as he was campaigning for a fracking ban. Needless to say, the Huffington Post refused to scrutinize his dueling beliefs.

The Newsweek headline pointedly declared, “Fracking Might Have Led to 5.5 Magnitude Earthquake that Injured Nearly 100 People: Study,” followed by an equally gnarly opening sentence: “Fracking may have led to one of the most powerful earthquakes to strike South Korea since records began, scientists believe.” The word “geothermal” doesn’t appear in the opening paragraph.

Throughout the story, we’re treated to embedded pictures of anti-fracking activists at the Democratic National Convention in 2016 and building damage in Oklahoma – neither of which had anything to do with geothermal energy. Were the Bernie Sanders supporters in Philadelphia to protest renewable energy? Of course not.

The story claims multiple times that Oklahoma earthquakes – which have nothing to do with geothermal energy – are “linked to fracking,” even though most of the felt seismic events in the Sooner State have been linked to wastewater disposal, a separate process.

So what we have is seismic activity in South Korea, which researchers have connected to geothermal energy production, not oil and natural gas development. Yet Newsweek fails to even mention the word “geothermal” in its headline or opening paragraph about those findings, and takes extra care to shoehorn alarmist (and inaccurate) claims about fracking in the oilfield into its story.

But to make things even more bizarre, Newsweek – notwithstanding its multiple pieces of rich content on oil and natural gas embedded in the story – admits that comparing geothermal fracking to what happens in the oilfield is not appropriate, because what they can do in the oilfield is probably safer:

“Technology to help contain rock fracturing might also improve safety. Companies fracking shale rock for natural gas have developed tech to seal off parts of boreholes, Westaway explained. This kind of technology could reduce unwanted rock fracturing, but it’s not easy to transfer from the shale field. The temperatures needed for geothermal fracking, he said, would damage the shale technology.” (emphasis added)

This kind of dishonesty – where oil and natural gas can be implicitly (or perhaps explicitly) indicted for earthquakes caused by renewable energy – is only possible because of a lazy definition of fracking that far too many in the media have adopted.

Over the years, I have had countless conversations with reporters about induced seismicity – conversations that inevitably require me to explain the difference between hydraulic fracturing and wastewater disposal: different wells, different regulatory regimes, often different companies. Most of the time, it’s a fruitful conversation. Thanks for the information, I appreciate it, have a nice day.

But by far the most common pushback I’ve gotten from journalists is that the general public views fracking not just as, well, fracking. They view it as the entire development process, so if a well was fractured and generated wastewater that was later disposed into a separate well, and then an earthquake occurred nearby, blaming it on fracking is okay.

This is, of course, ridiculous.

There’s no polling to suggest the public believes fracking is just fracking or the entire supply chain. If anything, that claim is self-fulfilling. If you believe the public thinks a certain way, and you report (inaccurately) to cater to that belief, then you are actually helping to create that belief.

Moreover, defending a false characterization for the sake of simplicity is pretty much laziness defined. Fracking and injection have different regulatory regimes, so misinformation can also lead to bad policy. Cities that have tried to ban the hydraulic fracturing process have often cited earthquakes as a concern, which only underscores why defending inaccuracy is so harmful.

I wrote about this subject three years ago, when CNN used a headline that was objectively and demonstrably false, but refused to correct it. Researchers from Southern Methodist University released a report on earthquakes in North Texas, which they blamed on wastewater disposal. They later testified in front of the Texas House of Representatives that they were frustrated with the media for saying they blamed fracking, which they did not.

“We’re not talking at all about fracking,” said Dr. Matthew Hornbach of SMU. “In fact, it’s been driving us crazy, frankly, that people keep using it in the press.”

Unfortunately, as any Google News search can attest, the “we can blame it all on fracking” crowd has continued its stubborn insistence on the laziest possible definition of hydraulic fracturing.

But let’s revisit that “fracking” defense, because Newsweek has inadvertently exposed a wrinkle in that thesis.

If the public does in fact view “fracking” as the entire oil and natural gas development process, then how can Newsweek justify a headline and opening paragraph that links the process to earthquakes without even mentioning that, in this case, it has nothing to do with oil and natural gas? By the media’s own standard, Newsweek’s convenient omissions when talking about “fracking” are misleading at best.

People increasingly get their news from social media, which means they’re increasingly digesting headlines and short blurbs rather than reading full length stories. The way a story appears on Twitter or in a Facebook news feed is often all that people will see.

Newsweek’s story preview on social media looks like this. The word “geothermal” is nowhere to be found. 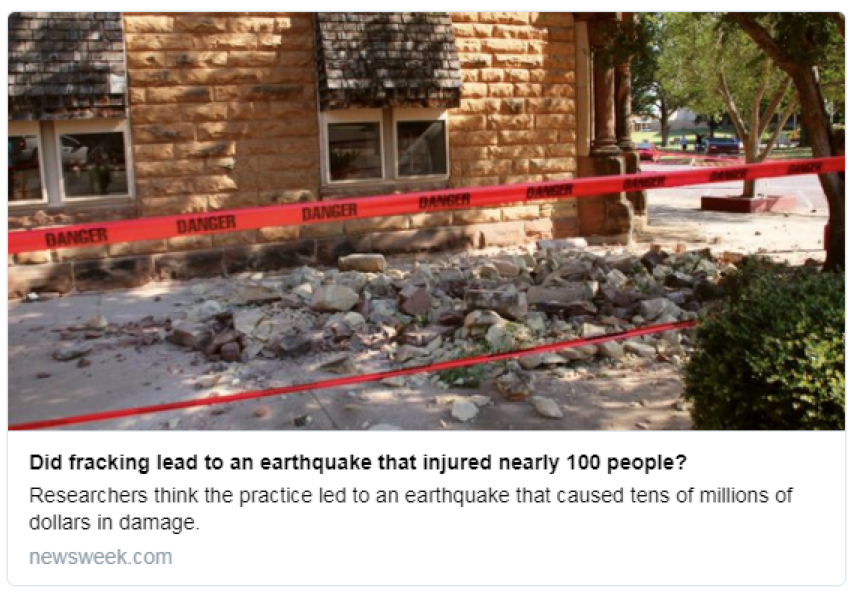 The media often gets an unfair rap when it comes to “fake news” and bad reporting. Mistakes happen, sure, but most of the time they don’t – and when they do, they’re usually corrected.

Things like this Newsweek story, however, are what really undermine trust in the media – not just because it’s dishonest, but because it reflects a pattern of dishonesty. Thanks to social media, the ramifications of inaccuracy are easy to spot in real time. Within minutes of its publication, an anti-fracking group (that is, opposed to oil and natural gas) had already pushed Newsweek’s headline to its thousands of followers, and similarly without mentioning “geothermal.”

NEW: #Fracking might have led to 5.5 magnitude earthquake that injured nearly people in South Korea. Could be a “game-changer” if proved. https://t.co/9yxgs6ZYf9

We should not be so cynical to think opposition to fracking is due entirely (or even mostly) to how the press has covered the issue. But one thing is for sure: it certainly makes it more difficult to have an informed conversation when misleading narratives are the top Google search results – and the individuals we are supposed to lean on to correct those narratives are the ones pushing them.