Researchers with the National Oceanic and Atmospheric Administration (NOAA) have just released a new study in the journal Nature, which finds – like several previous studies – that microbial sources such as rice paddies and wetlands are the cause of the global increase in methane emissions, not fossil fuel development.

Despite what some headlines may be suggesting, the researchers’ data show methane emissions from fossil fuel production are “not increasing over time” even though energy production has dramatically increased. When the researchers do single out natural gas emissions from other fossil fuels, they note that leakage rates have significantly declined due to “industry improvements.”

Here are the top four things to know about this important study:

Fact #1: Wetlands and agriculture – not fossil fuel production – are responsible for the increase in global methane emissions

The researchers’ isotopic analysis shows that natural or microbial sources, such as “wetlands, ruminants, rice, landfill/waste, termites” are the source of most of the methane released to the atmosphere each year.

As lead author Stefan Schwietzke of NOAA at the University of Colorado Boulder explains, methane emissions from fossil fuel development are “not responsible for the increase in total methane emissions observed since 2007.”

The chart included in the study shows this clearly: 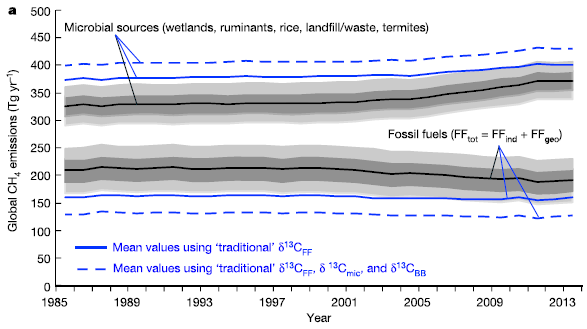 Schwietzke further said the greatest portion of methane emissions is coming either from wetlands or agriculture:

“Whether it is more wetlands or whether it is more cows and agricultural rise, we’re not sure yet,” Schwietzke said. “There are other studies that hint that it’s more likely tropical wetlands sources,” he added, where microbial activity may be increasing as a result of rising global temperatures because of climate change.

Fact #2: Fossil fuel methane emissions are not increasing despite dramatic increases in production

The study is very clear that fossil fuel emissions “are not increasing over time” despite the huge increase in fossil fuel production. From the study:

Fact #3: Researchers lump all fossil fuels together to claim emissions are 20 to 60 percent higher than previous estimates; go on to single out a dramatic drop in natural gas leakage rates

The study’s headline and some of the news outlet headlines have highlighted the fact that the researchers found methane emissions from fossil fuel development were 20 to 60 percent higher than what previous estimates found. The key phrase here is “fossil fuels” because the researchers evaluate the contribution of all fossil fuels and even natural seeps together, without determining how much is coming from each source, to make these claims. From the report:

When they do actually single out natural gas emissions, the researchers are very clear that leakage rates are down significantly:

The researchers further note that this decrease in methane emissions is due to “industry improvements”:

“Instead, this study finds that natural-gas CH4 emissions per unit of production have declined from about 8% in the mid-1980 s to about 2% in the late 2000 s and early 2010 s. Natural-gas industry improvements associated with management practices, technology, and replacement of older equipment have been credited with reducing CH4 leakage in the past.”

Importantly, the latest data show that producers in the United States have achieved a leakage rate far lower than 2 percent of production.

The Environmental Protection Agency (EPA) found a leakage rate of around 1.5 percent, while studies by the University of Colorado at Boulder/NOAA, and several spearheaded by the Environmental Defense Fund (EDF), found very low methane leakage rates ranging from 1.2 percent to 1.6 percent. These rates are far below the threshold (3.2 percent) for natural gas to be substantially beneficial for the climate.

Fact #4: This study follows a number of reports that have come to the same conclusion that fossil fuel emissions are not to blame

This study follows another study by researchers at the Department of Earth Sciences at Royal Holloway, University of London and a study by NOAA and the National Institute of Water and Atmospheric Research in New Zealand (NIWAR), which both came to the same conclusion that emissions from wetlands and agriculture are causing the global rise in methane, not fossil fuels. Another new study (which has been reported on but not yet published) shows that man-made reservoirs produce as much methane as all the world’s rice paddies — that’s definitely more than what’s coming from natural gas production.

Considering that U.S. producers are already way ahead of the curve for methane reductions, and that fossil fuel production is not to blame for global emissions, why are EPA’s costly methane rules necessary?