The latter research garnered considerable media coverage based on its conclusion that methane emissions from shale gas development were 50 percent higher than EPA estimates, due to so-called “super-emitters.” But a new NOAA study finds that such research relied on air measurements likely collected during episodic maintenance events, which skewed emissions higher than they typically would be. As a result, these “peak” emissions data were inappropriately used to calculate a normal emissions profile.

This conclusion is based on the fact that aircraft measurements such as the ones taken for the earlier studies are typically collected around noon in order to get the best readings, according to the NOAA paper. This happens to be roughly the same time emissions from routine maintenance operations typically conducted in the late morning — such as manual liquids unloading — are at their maximum levels in the atmosphere, leading to anomalous emissions.

As the orange-tinted columns in the following chart from the NOAA study illustrate, these episodic emissions are substantial – and certainly not reflective of typical emissions. The orange column near the center of the chart shows actual emission leakage rate data collected during the study, while the orange column on the right shows those leakage rates when emissions from manual liquid unloading events are subtracted. 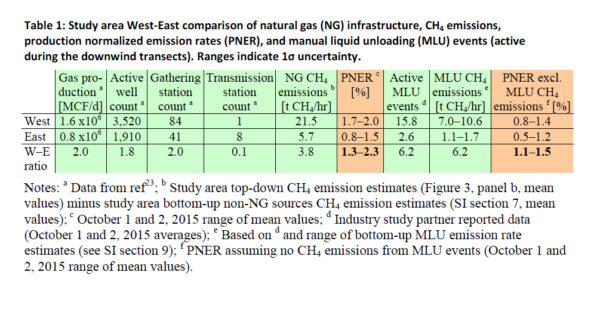 The NOAA researchers — who in addition to taking state-of-the-art air measurements, also had full site access and emissions data from 90-plus percent of the operators in the Fayetteville region for the purpose of this study — were able to conclude,

“Operator reported hourly activity data show that midday episodic emissions from manual liquid unloadings (a routine operation in this basin and elsewhere) could explain ~1/3 of the total emissions detected midday by the aircraft and ~2/3 of the West-East difference in emissions.”

“[E]pisodic sources can substantially impact midday methane emissions and aircraft may detect daily peak emissions rather than daily averages that are generally employed in emissions inventories.”

The motivation of the NOAA study — the first in a series of research planned in the Fayetteville region — was to better characterize “top down” emission collection techniques in aircrafts with “bottom up” facility-level methods in an effort to reconcile the two methods by combining the two approaches.

“Top down” studies typically yield higher emissions than “bottom up” studies, and – as a result – critics have suggested bottom-up studies underestimate emissions. But as the NOAA study notes, not only did those studies assume that the higher emissions detected using the “top-down” method were from episodic and other peak emissions events, they also inappropriately used statistical models to extrapolate these measurements as if they were typical emissions on a 24-hour-a-day, 365-day-a-year basis.

As the NOAA study explains,

“We offer a different explanation by showing that manually-triggered, episodic releases of NG can represent a large fraction (~1/3 in this case) of total midday CH4 emissions. This explanation is based on average emission rates of the specific episodic releases (MLU) rather than statistical fat tails. Thus, a valid comparison of aircraft estimates with annualized inventories needs to establish the representativeness of midday activity data for annualized emissions… Episodic releases, rather than atmospheric variability, may also explain substantial day-to-day variability.”

The fact that there was a substantial difference in emissions from the first day to the final day of the two-day sampling process of the study also supports the researchers’ topline conclusion,

“The 22% emission difference between both days further emphasizes that episodic sources can substantially impact midday methane emissions and that aircraft may detect daily peak emissions rather than daily averages that are generally employed in emissions inventories. While the aircraft approach is valid, quantitative and independent, our study sheds new light on the interpretation of previous basin scale aircraft studies, and provides an improved mechanistic understanding of oil and gas related methane emissions.”

The findings of the NOAA study are quite timely, considering the EPA recently issued a 90-day stay on the Obama-era fugitive methane emissions rules – rules that were justified in part by earlier research alleging abnormally high emissions from shale gas development.