It’s official – natural gas is an important part of the solution to reduce emissions in northwest corridor of Florida.

Gulf Power recently announced it would transition its Plant Crist generator units from coal to natural gas, enabling the electric utility to reduce its carbon footprint at the facility by 40 percent. That’s equivalent to taking about 297,000 cars off the road annually.

Gulf Power president Marlene Santosstated in the announcement that the transition to natural gas will bring endless benefits for the community and the environment:

“Retiring coal at Plant Crist will end our use of coal in Florida and help usher in a new, cleaner energy era for Gulf Power. Ending our use of coal delivers benefits for our customers and our communities through lower costs along with cleaner emissions. We look forward to continuing to invest in cleaner energy solutions for Northwest Florida, including more efficient natural gas technology as well as emissions-free solar farms.”

Hurricane Sally, which swept through Florida’s northwest corridor and parts of Alabama in September, damaged parts of Plant Crist, accelerating Gulf Power’s decision to switch the facility to natural gas. This will help drive down operating costs and result in lower utility bills for consumers.

In addition to its announcement, the electric utility is also looking to adjust its Environmental Cost Recovery Clause (ECRC) for 2021 to reflect the lower costs with switching to natural gas. Should Florida regulation officials approve the adjustment, utility customers in the region can expect to see a net decrease in their bill.

Replacing carbon-intense power generation is a crucial step that utilities can take to reduce emissions. Gulf Power, with the modernization of its Plant Crist facility, says the natural gas transition will mark a key milestone for cleaner energy:

“Gulf Power is committed to providing clean, reliable energy and lowering costs for our customers while enhancing the reliability of the electric grid. The modernization of Plant Crist, which includes a significant investment in cleaner, more efficient natural gas technology, is a key milestone in Gulf Power’s clean energy future.”

Energy security and reliability are also important factors for large-scale utility companies, especially for power plants that must be equipped to respond to extreme weather like those in Florida. Natural gas helps accomplish all of these goals while also providing baseload power to compliment growing renewable energy sources as Gulf Power touted in its announcement:

“In addition, Gulf Power and Florida Power & Light are working together to make Northwest Florida a leader in clean, solar energy that keeps costs down for customers and keeps the region beautiful. Together, the companies have a plan to install 30 million solar panels throughout all of Florida by 2030, positioning Florida as a solar leader.”

Florida Is Leading The Pack In The Transition To Natural Gas

Florida is the fourth-largest energy-consuming state and the second-largest producer of electricity in the country. That production is overwhelmingly powered by natural gas, which accounts for 70 percent of the state’s net generation of electricity, according to the Energy Information Administration. 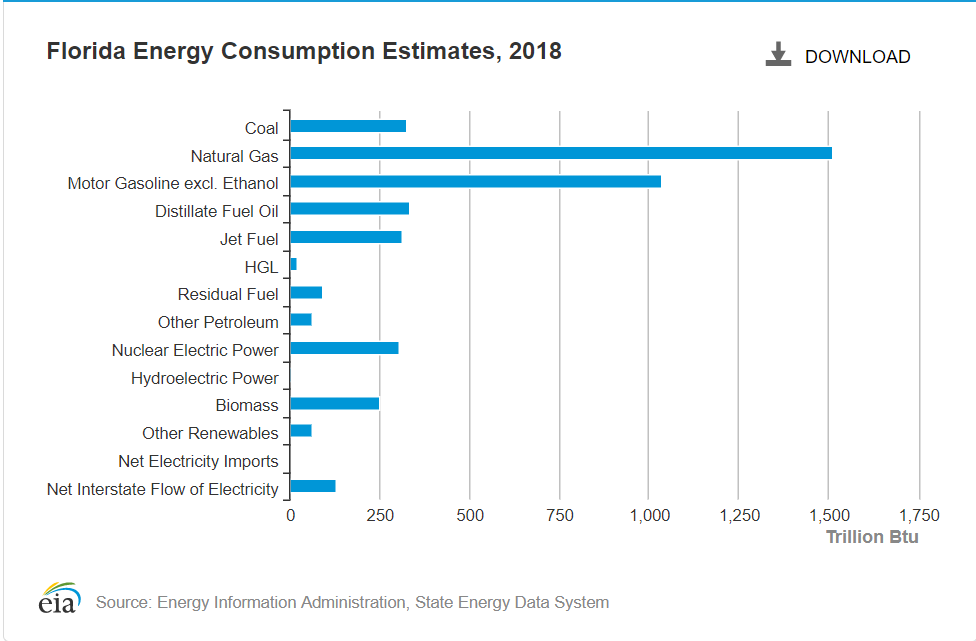 This – coupled with plans to increase solar capacity in the region – demonstrates that Florida is leading the pack in the transition to more reliable and efficient resources and continues to be a testing ground for cleaner energy.

Florida is not an outlier in its transition to natural gas, either. As the largest energy consuming state in the country, Texas powers nearly half of the state by natural gas, making up 47.4 percent of the state’s total energy portfolio, even as wind power grows.

Similarly, in California, the second-highest energy consumer behind Texas, natural gas accounts for nearly half of all electricity production in the state – it consumed nearly 2,207 trillion British thermal units (Btu) of natural gas in 2018.

The announcement from Gulf Power shows that the transition to natural gas continues to gain momentum in Florida and around the nation. As large, energy-consuming states begin to generate more power from renewables, utilities will continue to count on natural gas to provide reliable power while also cutting emissions.

Natural gas is a crucial part of the nation’s energy mix and is helping to meet emissions reductions goals. Calls to stop the development of natural gas power plants simply don’t align with the reality of energy needs and climate goals.