Obama Admin. Inclusion of Marginal Wells In Methane Rule Based on “Unconventional” Data, Misrepresentation of the Facts

One of the most head-scratching aspects of the Obama Administration’s recently finalized methane rule is the fact that after Environmental Protection Agency’s (EPA) draft regulations included an exemption for marginal wells – since small sources, obviously, are not releasing large amounts of methane – EPA’s final rules actually eliminate that exemption, and with no reasonable explanation.

EPA’s August 2015 draft regulations on methane included a set of control techniques guidelines (CTG) that explicitly acknowledged that marginal operations would be exempt in EPA’s methane rule – or its New Source Performance Standard (NSPS) – on the basis of economic hardship and because emissions at marginal sites are “inherently low.” As EPA put it,

Meanwhile, a quick look at what some anti-fracking commenters had to say sheds a bit of light on what could be the motivation behind EPA’s strange and contradictory move. The Clean Air Task Force (CATF) for instance, quoted a study spearheaded by the Environmental Defense Fund (EDF), Zavala-Araiza et. al, which CATF says shows that “lower producing wells can have significant emissions.” CATF would have you believe, counterintuitively, that small sites can emit the same volume as larger sites.

Also, a closer look at the data used in the EDF study demonstrates that marginal wells clearly represent a low component of the methane emissions universe. 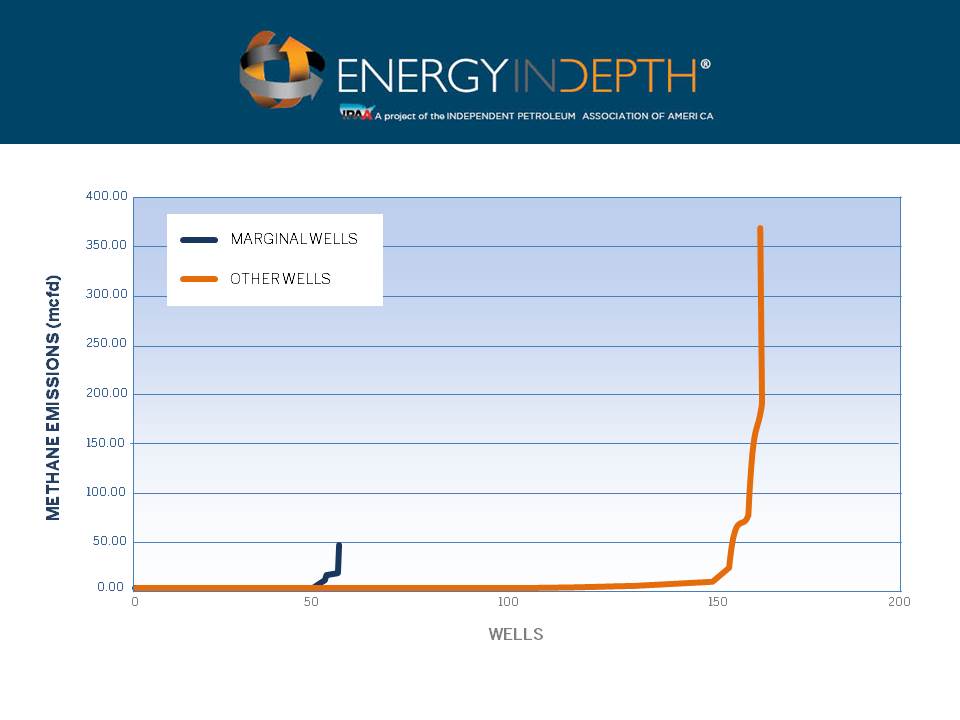 If the Obama Administration’s objective is come up with a justification for new federal regulations, presenting the data in this “unconventional” way would be one way to give it “cover.” But if the Administration insists on using this flawed EDF data as the reason for rejecting its own original proposal to exempt marginal wells, it should also bear the burden of explaining EDF’s unrealistic conclusions.

The EPA is correct that small businesses are the predominant operators of marginal wells, because larger companies often sell wells to small businesses when they no longer want to operate them.  But, the Administration’s decision on this NSPS will certainly change that.

What’s more is the Administration’s decision doesn’t meet fundamental test of defining the Best System of Emissions Reductions that must be used in setting a NSPS. The fugitive emissions requirements in the regulation are based on operations when a well is new, when its production is at its highest rate – 1,000, 2,000, 5,000 mcfd.  But, when a well becomes marginal and its average production drops to 22 mcfd, it cannot bear the cost of a fugitive emissions program designed and justified for production rates 50 to 100 times its production rate. By embedding the fugitive emissions program on these wells for the life of their existence, the Administration is guaranteeing that they will end that life well before it otherwise would end, hurting small producers the most.

A report last year by NERA Economic Consulting – which has performed analyses for the U.S. Department of Energy, among others – found that the methane rule was based on a single, flawed economic study of the “social cost of methane.” The study was also authored by individuals within the EPA.