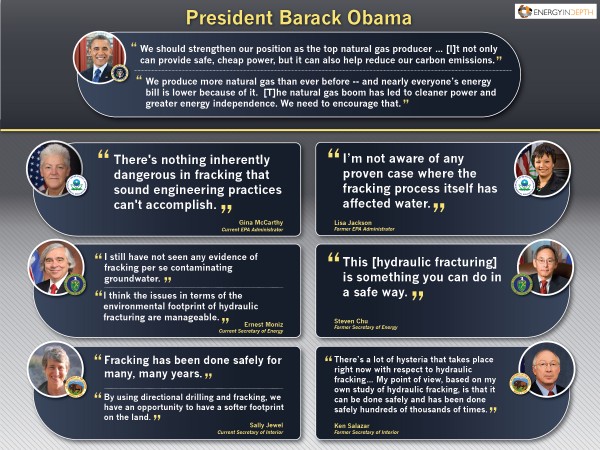 It’s become common for the “debate” on hydraulic fracturing to be described as two competing interests: critics allege it is unsafe, but the industry claims it is safe. As it turns out, when it comes to recognizing the inherent safety of “fracking,” that binary — environmental groups vs. the oil and gas industry — is not an accurate representation.

We know, for example, that anti-fracking groups are more than willing to deny science on issues like water contamination, air emissions, public health, and even failure rates for well casings. In their haste to malign the  industry, the facts were unfortunately left behind.

Don’t just take our word for it, either. Regulators and high-ranking officials throughout President Obama’s administration have consistently touted natural gas as “cleaner energy” and “safe.” The President himself has said we “need to encourage” more production of natural gas, an increasing share of which is being sourced from shale and other “tight” reservoirs.

But what does the Obama administration have to say? The exact opposite. For example:

Each of these officials’ predecessors made similar affirmations of safety.

These statements reflect a careful and sober review of the many studies and assessments of shale development, which looked at everything from air emissions to seismicity to water concerns.

These regulators and officials also have access to the same information that anti-fracking activists do. They’ve studied the same reports, and they read the same news. So it’s worth asking: Should we place more trust in groups who are ideologically opposed to oil and gas development, or federal regulators whose job is to keep the public safe?

CLICK HERE to see what top Obama administration officials say about the safety of hydraulic fracturing and the importance of U.S. natural gas development.