This summer is certainly not off to a great start for fringe Ohio anti-fracking environmental activists, as their efforts to organize continue to be epic failures. Today’s “digital disruption powerhour” in Cincinnati was the worst event yet, with only five attendees, according to the following social media post. At least their Facebook page is more honest than the last event, where only 30 percent of the people who claimed they went to the event actually did so in reality. 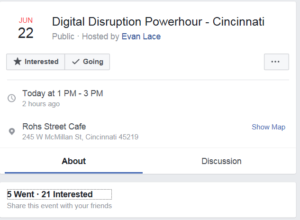 Of course the irony of this event is hysterical, given that the power to fuel the so-called “digital disruption” in Ohio comes from fossil fuels, and more specifically from natural gas. It’s also ironic that the event was held in Cincinnati, where natural gas use has improved the air quality so much that for the first time in 10 years southwest Ohio will be in attainment of air quality standards, all thanks to fracking.

The organizer of both this Cincinnati event and the last epic failure, the so-called “Hands Off Public Land Rally and March” in Columbus, has ties to California billionaire activist Tom Steyer’s NextGen Climate. In fact, shortly after the failed statewide rally, activists responded that “this organization is about to receive some big funding,” and they were right. This week, Steyer – on the heels of a failed fracking ban initiative he bankrolled in Nevada – announced his plans to plow $7.5 million into environmental activism in key battleground states, including Ohio.

One would think that Steyer would learn his money is not welcomed in the Buckeye State after suffering a string of defeats in recent Ohio elections, where voters overwhelmingly voted for candidates (on both sides of the aisle) who support fracking .

Regardless of how much money and influence out-of-state and out-of-touch groups try to impose on Ohians, the people who actually live and work here have become wise to their antics, as this latest anti-fracking digital disappointment in Cincinnati clearly demonstrates.