Ohio Soil Recycling is using an innovative technology to reduce the industry’s environmental footprint. The process involves taking drill cuttings that would normally go to landfills, and instead turns them into normal fill dirt.  This process, also known as bioremediation, uses billions of tiny microbes that eat leftover drilling mud, which is mixed in with the soil, rock and shale. The new process – which represents a significant breakthrough and a clear win for the environment – should be heralded by everyone, especially the environmental community.

Chris Elliot founded Ohio Soil Recycling in 2000, and since then his company has been focused on using bioremediation to clean up contaminated dirt left over from old brownfields, gas stations and old storage tanks.  The company has successfully remediated over 500,000 tons of non-hazardous, contaminated material and used the “clean fill” to reclaim an abandoned landfill on the eastside of Columbus.

So what is bioremediation, exactly?  Ohio Soil Recycling takes soil that may contain contaminants and grinds it up into fine material.  Then, it is placed on a conveyor belt where it is sprayed with tiny microbes that will eat any contaminants, returning it to its original state. 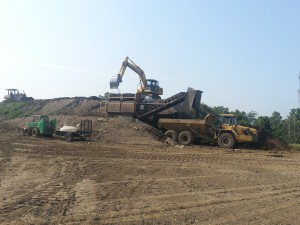 Last year Mr. Elliot realized he could tweak his successful bioremediation process and use it to clean drill cuttings contaminated by drilling mud.  For the record, drilling mud is a non-hazardous material that usually consists of mineral oil.  Although mineral oil is non-hazardous, it still renders the cuttings unsuitable for reuse.  That is, until Ohio Soil Recycling was permitted in September to begin processing these cuttings.

As Mr. Elliot explains, it was nearly a two-year process to get this from the drawing board to permitted and accepted by the Ohio Environmental Protection Agency (OEPA).

“For the past 12 years our firm has specialized in bioremediation and the disposal of non-hazardous contaminated soils from brownfield sites, underground storage tank removals and emergency response cleanups.  Approximately two years ago, we began R&D on modifying our process for remediating drill cuttings impacted with naturally occurring hydrocarbons, synthetic oil based lubricants and drilling muds.

“For the past year and seven months we have undergone a thorough permitting process through the Ohio EPA and in September of this year we received a permit to accept drill cuttings.  Part of the permitting process we went through included a five month pilot study in which we accepted drill cuttings at our facility here in Columbus, Ohio, utilized our biological treatment process on these drill cuttings and remediated them to levels below residential standards as defined by the Ohio EPA.”

Last October, Ohio Soil Recycling began the pilot program permitted by the OEPA, which lasted five months. During that time, the company took in the worst cuttings it could find and put its microbes to the test.  They also decided to pick the worst time of year (winter) to attempt their pilot program, since the microbes would presumably be slowed down by the cold weather.

During those five months, the recipe of microbes was refined and the process exceeded expectations.  Once the pilot program was finished, the soil was taken to the OEPA to see if it passed the muster.  After testing numerous samples, the OEPA found the soil to exceed the standards of residential fill dirt and the company was permitted in September to receive drill cuttings, providing an important green innovation.

Now that Ohio Soil Recycling received the seal of approval from the OEPA, one would assume the environmental community would embrace this new technology. Unfortunately, that is not the case.

When a local anti-oil-and-gas activist caught wind that Ohio Soil Recycling was going to be remediating the cuttings, she rented a billboard and started a website to malign the company. 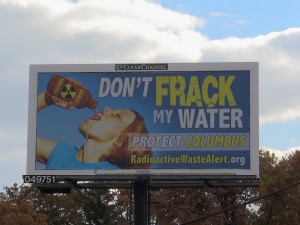 As you can see, this billboard is not only misleading, but the message couldn’t be any further from the truth.

The cuttings Ohio Soil Recycling receives have already been tested to make sure they do not contain any levels of naturally occurring radioactive material above background levels.  This was placed into law by the Ohio legislature following the passage of HB 59 over the summer. The company also uses 40mm High Density Poly Ethylene liner at the site and the water that is used for microbe application is kept in a closed looped system, making the alarmist claim about creek contamination completely bogus.

Nonetheless, Chris Elliot has taken it upon himself to buy a radiation detector for his facility. He’s committed to turning away any drill cuttings that may contain any NORM above background levels as a courtesy to residents who may be concerned.

Despite this, the woman behind the Radioactive Waste Alert billboard and website is now hosting the “Radioactive Frackwaste” forum in Columbus to stir up residents with wild tales and misinformation about Elliot’s company.

It is truly a sad day when a company steps up and provides an environmentally friendly solution, only to be criticized by the very people who claim to advocate for the environment.  When will the rational environmental groups in Ohio stand up and educate their fellow activists that environmental progress is worth celebrating?