For the past several years, Ohio has been anxiously awaiting the construction of ethane cracker plant in the Buckeye State to support the Utica Shale’s impressive production results.

An ethane cracker plant does exactly what its title would imply: it takes ethane, a component of natural gas found in Ohio’s Utica Shale and “cracks” it into ethylene, which is the root petrochemical for resins, plastics, adhesives, and synthetic products used in practically every aspect of our lives. EID’s infographic below shows the extent to which natural gas is a feedstock for American’s manufacturing industry: 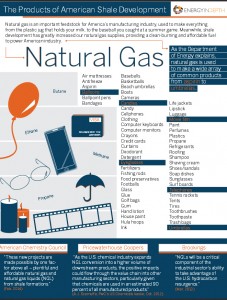 Thanks to abundant and affordable supplies of natural gas unlocked by hydraulic fracturing, manufacturing has been coming back to the United States – and new natural gas cracker plants have been heralded as game-changers in this process.

While details of the new ethane cracker plant in eastern Ohio are still pending, this announcement is certainly a significant step forward and is great news for the people of Ohio who will benefit from the jobs and economic growth. This isn’t the only project that could be on the horizon, either. In 2014, PTT Global Chemical announced it was evaluating three locations, with the Appalachian region in Ohio as a potential site for a cracker project. Other announcements have been made by Royal Dutch Shell, Odebrecht, and Appalachian Resin. They, too, have been eyeing the Appalachian Basin as the potential home to their own ethane cracker projects.