At a recent Shale Symposium in Wheeling, West Virginia, remarks were made, which spurred headlines like, “Conference Conclusion: Area’s Oil & Gas Industry Jobs Not Stacking Up”. Those remarks came from Mr. Stephen Herzenberg of the Keystone Research Center, who claimed that industry studies touting 200,000 shale-related jobs are using “silly” methodology. That would be a surprise to anyone living in Ohio’s shale counties where unemployment, on average, has seen a 66 percent decline.

Herzenberg was likely referring to an Economic Impact Study prepared by the Ohio Oil and Gas Energy Education Program (OOGEEP) in 2011, which predicted that Ohio’s oil and gas industry would support more than 204,000 jobs by the end of 2015.

But not only did the OOGEEP 2011 study rightly predict large job and economic growth in Ohio, many of its predictions were actually surpassed in reality. In fact, the 2011 study estimated that by the end of 2014 there would be 1,386 wells drilled in Ohio. To date, there have been 1,442 Utica Horizontal wells drilled. The picture below represents the most current image of Utica horizontal wells and activity in Ohio, according to the Ohio Department of Natural Resources. 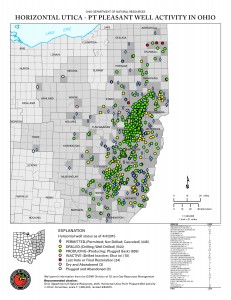 In addition, the 2011 OOGEEP study also predicted that exploration and production investment by the oil and gas industry could result in upwards of $14 billion by 2015. Yet, by mid-2014, that number was surpassed by more than $8 billion, as the investment in shale related activities reached $22.3 billion. Even with a pull-back in short-term drilling operations, another $8 billion is slated to come on line in 2016 from pipeline infrastructure. This infrastructure build out will also include transmission facilities, processing plants, and power plants. These projects will create jobs in areas of Ohio that have not yet realized the full economic benefit from shale development, such as the southernmost region, where Columbia Pipeline Group plans to invest $1.4 billion in a pipeline that will extend down to Jackson County, Ohio. Another example is Energy Transfer’s Rover pipeline, which is slated to bring 4,500-6,500 jobs to Ohio, many of which will go to the northwest region of the state. In addition, Ohio counties will see an estimated $147 million in property taxes the first year of service.

Below is a breakdown of the amount of investment each new pipeline would bring to Ohio:

Just last week, we learned that Carroll County Energy began construction on a natural gas electric power plant will create 700 new construction jobs in the county and employ 20-30 workers when complete. This news only adds to the already astounding job creation in the county, as Carroll County’s unemployment rate has already dropped 72 percent since 2010. This is certainly good news for the skilled trades, both union and non-union.

OOGEEP is preparing to undertake an update to the 2011 study, but comparable data is available today. The Ohio Department of Job and Family Services (ODJFS) regularly tracks oil and gas related employment in Ohio through its Ohio Shale Report: Quarterly Economic Trends for Ohio’s Oil and Gas Industries. ODJFS’s most recent report (2014, Q2) declared 190,153 people were employed by Ohio’s oil and gas industry and related fields. OOGEEP’s study estimated 178,088 people would be employed in 2014. These studies, while not identical, are very comparable as they were both developed using Quarterly Census of Employment and Wages data.

The bottom line is this: more than $22 billion has been invested in Ohio and 190,153 people are employed in Ohio’s oil and gas industry or related companies. They are working, improving their lives and bettering the communities in which they live. There’s no debate about that.