This past year has been amazing for the Utica Shale in Ohio, as production of oil and gas in the state has more than doubled. At the end of 2014, EID reported that the counties to watch in 2015 included Monroe, Belmont, and Noble Counties — and we were right. Production results for the first three quarters of 2015 showed Utica Shale development trended south to these counties, and the best producing wells, particularly natural gas wells, have been located in these counties. But as we look ahead to 2016, one of these counties, Belmont, is where the real story of promise will lie.

Why does Belmont County stand out amongst similar counties with high production? Well, it’s because Belmont County is by far the most diversified story in the Utica with a combination of surging production results, new permits to drill, proximity to roads, rail, and barges, and most importantly, a new multi-billion dollar ethane cracker. With all of these elements coming together, it’s fair to say that all eyes will be on Belmont County in 2016.

The final word on if Belmont County will indeed be the home of the PTT Global ethane cracker plant will be announced next year. However $100 million has already been pledged in initial construction. EID recently had an opportunity to tour the proposed site of the facility with the Belmont County Port Authority (BCPA) Executive Director, Larry Merry. BCPA has been working hand-in-hand with Jobs Ohio, PTT Global Chemical Public Company LTd. and Marubeni Corp to secure the initial pledged investment of $100 million in engineering, which will determine the ultimate fate of the plant. If the project does indeed come to the region, it will be a facility on a scale the county has yet to see from other industries. As such, Merry told EID,

“It’s just hard to fathom and a get a grasp of this project. I’m still not sure that I have my mind wrapped around it.”

With a site of nearly 500 acres along the Ohio River, including a 100 acre plant and a huge rail complex, it would be hard for anyone to wrap to their head around the sheer magnitude of the proposed $5.7 billion ethane cracker plant. To give some perspective, below is a picture of First Energy Corp’s coal-fired Burger plant, which will be the home of the proposed ethane cracker in Ohio.

In 2010 the U.S. EPA forced the coal plant to shut down, taking with it needed jobs and tax revenue for the community and school district. The community was devastated, as unemployment stood at 13.8 percent following its closure. Five years later, thanks to shale development, this project would include completely removing the coal-fired plant and constructing a multi-billion dollar cracker, that that will be a “new promise for Belmont County” and bring thousands of construction jobs and hundreds of permanent jobs.

In many ways, you can already see that “new promise” underway in Belmont County, as retail businesses, hotels, restaurants, and even a brand new Starbucks has arrived just within the last two years. Shale development has transformed one of the most economically depressed areas in the Appalachia Region – Belmont, Marshall and Ohio counties – into the fifth fastest growing economy in the nation, according to new statistics by the U.S. Department of Commerce.

Local small businesses have come back to life and revitalized their strategies to start new endeavors, such as MPR Supply Chain Solutions, a company which has emerged as a leader in supportive services to the oil and gas industry in Belmont County. That includes a state-of the art transloading facility on the Ohio River for sand used in hydraulic fracturing, and a host of other supportive services for the Marcellus and Utica Shale industries in the region. 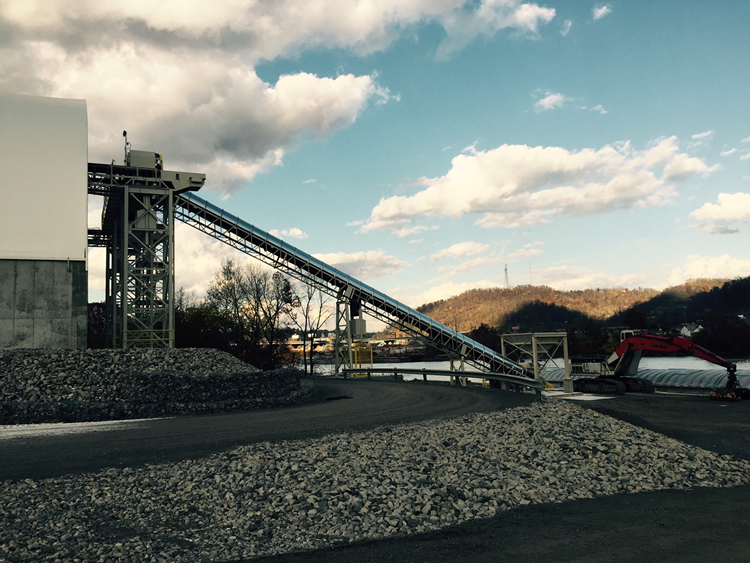 Energy In Depth recently had an opportunity to tour this new facility. It was a vision that began several years ago when MPR Supply Chain Solutions decided to restructure and expand its business on the Ohio River in Belmont County to include an antiquated Belmont County Memorial USAR Center (Armory) that was adjacent to the MPR property. It was owned by the government and a drain to taxpayers. Through innovation and collaboration, that site has since been sold by the government, generating revenue and a tax base. The substantial expansion has allowed the company to create more jobs for the region. Rick Frio, Chairman, MPR Transloading and Energy Services explained to EID the impact the oil and gas industry has already had on Belmont County, and the region as a whole:

“The arrival of the oil and gas industry to the Tri State Area is a literal life saver. With our local steel mills closing and coal being under attack, we frankly would be in a deep recession in our valley without the blessing of Utica and Marcellus Shale jobs. This touches each of us in several ways. The industry brought desperately needed good jobs to provide for our families. These jobs give our work force the respect that they earn and give long term hope for our families and businesses in the region. Moreover, the oil and gas industry experience in our region has been one of the most positive events in my lifetime. The industry demonstrates a commitment to safety that is second to none. In addition, their working relationship with local, state and federal governments is transparent and honorable, and their generous charitable endeavors have had a significant impact on the local communities with literally millions of dollars donated for desperately needed causes in the valley. Clearly the industry is laying a foundation to be a partner in our communities for the long term. I know I speak for tens of thousands in our region is giving thanks for the oil and gas industry and the opportunities it’s created here in the Ohio Valley.” (emphasis added)

But these projects, especially the proposed cracker facility, aren’t just impacting the local economy. There is no better example of the impact shale gas is having on global industries than the proposed facility. This project signals a trend in “shale economics” as more countries are looking to invest in the United States, bringing manufacturing jobs back to America. For example, PTT Global, a Thai company, will now be joined by two other European companies to move this project forward. This is evident from recent announcements that Switzerland-based INEOS Technologies and Technip SA of France will partner on the project to provide the science to support the manufacturing of polyethylene. PTT General Manager, Panod Awaiwanond, recently said,

“PTT Global Chemical is very excited by this project based on the U.S. Shale gas economics.”

All of this comes down to the fact that it has now become cheaper to produce ethylene and polyethylene in the United States, as a direct result of our abundant supply of domestically produced oil and natural gas. In fact, analysts have said it is two times cheaper to produce ethylene in the U.S. than in China. This trend is also impacting Saudi Arabia, as Jamal Malaikah, president and COO of National Petrochemical Industrial Co (NATPET), said in 2013,

“The feedstock cost for new crackers in the kingdom will be around $6/MMBtu as there’s not enough ethane availability, so cracker operators will have to use more propane than ethane. This cost will be much higher than the US gas price, which is currently at $3.50-4.00/MMBtu but will be reduced to $2 once there is increased production of shale gas.”

Two years later, Malaikah’s prediction on the impact from shale gas has shown to be accurate.   According to U.S. Energy Information Administration (EIA), Henry Hub spot prices for 2016 average $2.88 per million British thermal units (MMBtu) is 12 cents/MMBtu. Low feedstock costs, have brought about an increased demand for ethane crackers closer to the source, which is now the Appalachian Basin.

America has a once-in-a-generation opportunity to change the trajectory of the U.S. global competitiveness in manufacturing because an ethane cracker facility provides feedstock to manufacturing of all shapes and sizes. A recent report, Made in America, Again highlights domestically produced shale as the most “significant emerging advance for U.S. manufacturing competiveness.” In fact, Harvard Business School recently reported,

“Unconventional energy is perhaps the largest single opportunity to change American competitiveness and economic trajectory, as well as our geopolitical standing.”

So as we look forward to 2016, while Carroll County will continue to be a major player in the volume of Utica shale wells in Ohio, the real success story that will be making headlines is likely to come from farther south in Belmont County, where an intersection of core economically feasible acreage has resulted in tremendous natural gas production. Combine that with the easy access to roads, rail, and barges, and Belmont County becomes the ideal location on the Ohio River for real economic stimulus and long-term benefits for the community.

The important thing to remember is that these jobs, infrastructure, tax revenues, and supportive industries are all a result of America’s oil and gas industry, or as a global investor recently called it, “U.S. shale gas economics.” Without record breaking natural gas production, Belmont County would simply not have realized the tremendous economic growth it has had in 2015 and it would not be in a position to look forward to a robust year ahead. While there has already been a tremendous positive impact to this region of Ohio, look for 2016 to be an even bigger year, as we watch this success story continue to unfold.