Ohio Water Use, Fracking, and the Utica Shale

Activist groups committed to banning fracking have frequently claimed that water withdrawals from oil and gas development would lead to severe droughts in eastern Ohio.  In reality, actual data show the amount of water in Ohio and specifically eastern Ohio is quite plentiful, and water consumption from other industries dwarfs demand for fracking.

It is a fact that eastern Ohio is a surface water rich area of the state, and it receives a substantial amount of rainfall to provide enough water for electric generation, agriculture, residential use and, yes, oil and gas development.  Attempts to state otherwise are just simply not true.

For example: The Muskingum Watershed Conservancy District (MWCD) was founded on the basic principle of flood control.  In fact, it was the great flood of 1913 that led to its inception.  The dams built around the MWCD are meant to help reduce flooding while providing conservation and recreation for the residents of eastern Ohio.  Although flooding does still occur, they are not as severe as they were in the past.

In order to put things into perspective, here is a fact sheet that can help shed light on water usage in Ohio, putting water demand from oil and gas development in better perspective. 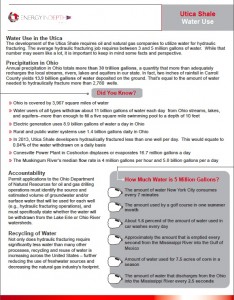