EID has learned that one school in Guernsey County has seen its funding double, thanks to minerals produced from shale wells.

This is a real-world example of the positive impacts discussed in EID’s recent report. Ohio communities are just now starting to get a glimpse of what’s to come as ad valorem taxes, or real estate property taxes, paid on oil and natural gas production are starting to pay dividends.  As EID’s report showed, six Ohio counties have collectively received $43.7 million from this one tax alone, based on production through 2013. One of these counties was Guernsey County, which is in the oil window of Utica Shale development and was a top oil-producing county every quarter last year.

Mineral values from the East Guernsey Local School District jurisdiction jumped more than 3,000 percent from 2012 to 2015. During the same period of time, forecasted real estate property tax payments to the school doubled from initial projections — a direct and impactful development that is entirely attributable to fracking.

It’s clear that this boost was unexpected, as the school district budgeted for about $2 million (inflation adjusted) from real estate property taxes through 2017. However, the school coffers broke $4.1 million in 2015 and added an additional $150,000 to the permanent improvement fund as well. Considering there were no new levies during this timespan, it is clear that it was the oil and gas industry that gave this school a boost, rather than already over-burdened homeowners.

Let’s take a look at how our recent report highlighting this important tax plays out in real life. Here’s the total shale production and property tax paid on Guernsey County oil and gas wells from 2010 to 2015. As is evident by the fact that significant ad valorem taxes were collected in 2010 and 2011 despite there being no shale production in the county at that time, conventional oil and gas development has been a staple for the county for some time. But as production from shale wells started in 2012, the property tax payments received on production grew rapidly right along with it. 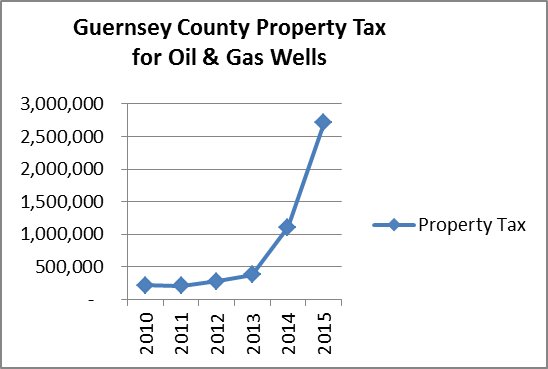 Again, the East Guernsey Local School District was clearly not anticipating this new revenue source, as is obvious by looking at its five-year forecast below. As you can clearly see, the school was expecting its inflation-adjusted revenues from real estate property taxes to stay about the same from 2010 to 2017.

So just as our recent report showed, real estate property taxes paid on oil and gas production have a huge real-world impact on local communities. This has certainly been true for East Guernsey Local School District, as the forecasted $2.1 million in property tax revenue instead wound up being $4.1 million — thanks to fracking. 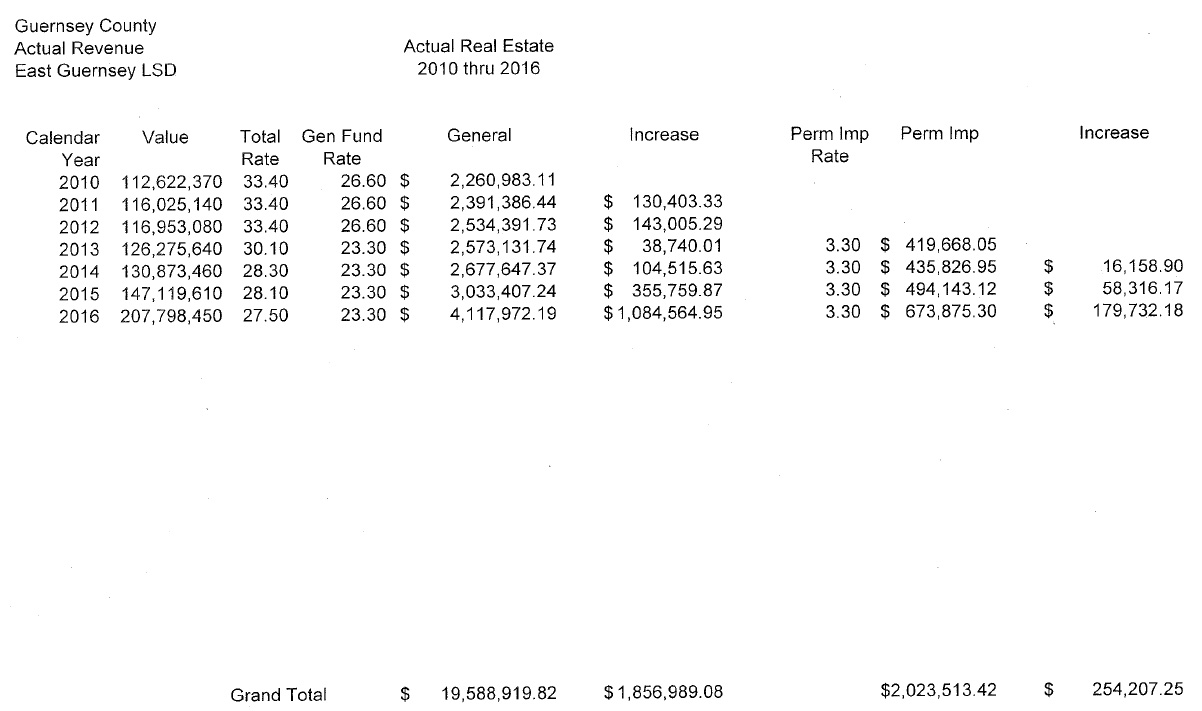 What’s more is that this is only the beginning. As was reported this week by the Ohio Department of Natural Resources (ODRN), last year’s natural gas production surpassed 2015 production by more than 43 percent, doing so in a year in which drilling was essentially shuttered. Drilling is starting to pick up again this year, and with it, we would expect production to rise as well. That’s why we conservatively forecasted Ohio shale counties will receive $200-$250 million from ad valorem taxes from 2016-2026. As this real-world data from East Guernsey Local School District shows, these taxes are having an enormous local positive impact and providing much-needed resources to our schools, governments and social services — and doing so without raising taxes on Ohioans.