Ohio’s oil and natural gas industry has proven to be a leader in reducing carbon emissions and protecting the environment – a fact that resonated in various events that took place across the state for Earth Day’s 50th anniversary.

Participants during a panel discussion hosted by the Ohio Oil & Gas Energy Education Program and the Ohio Oil & Gas Association took a break from planting trees across the state to hear from landowners, regulators, and oil and natural gas industry representatives on the steps being taken to protect and improve Ohio’s environment. As the panel’s moderator, OOGGEEP spokeswoman Kennedy Copeland, said:

“We’re here to celebrate the significant strides we’ve taken to achieve global climate goals. But more importantly, we’re here to proudly recognize that the increasing use of natural gas is a prime reason for these triumphs.”

Collaboration is the key to these successes, as the Ohio Department of Natural Resource’s Adam Schroeder said:

“Personally, I look at it as a three-way partnership: the [oil and natural gas] industry, the regulators, and the community. Other states are told to look at Ohio as an example of what to do right.”

And for Ohio, there’s more to celebrate this Earth Day as the Buckeye State leads the nation in carbon emission reductions. Between 2005 and 2017, Ohio emissions declined by 67 million metric tons (a 24 percent decrease) despite natural gas production and consumption increasing by 1,974 percent and 63.5 percent, respectively. This is a point echoed by Dr. Bob Chase of Marietta College’s Department of Petroleum Engineering and Geology:

“It’s pretty spectacular what’s occurred. Natural gas production is up, and emissions of methane have dropped. It’s largely because of the commitment companies operating in the Appalachian Basin have made to the environment.”

Dr. Chase went on to commend the industry’s efforts in protecting the environment. 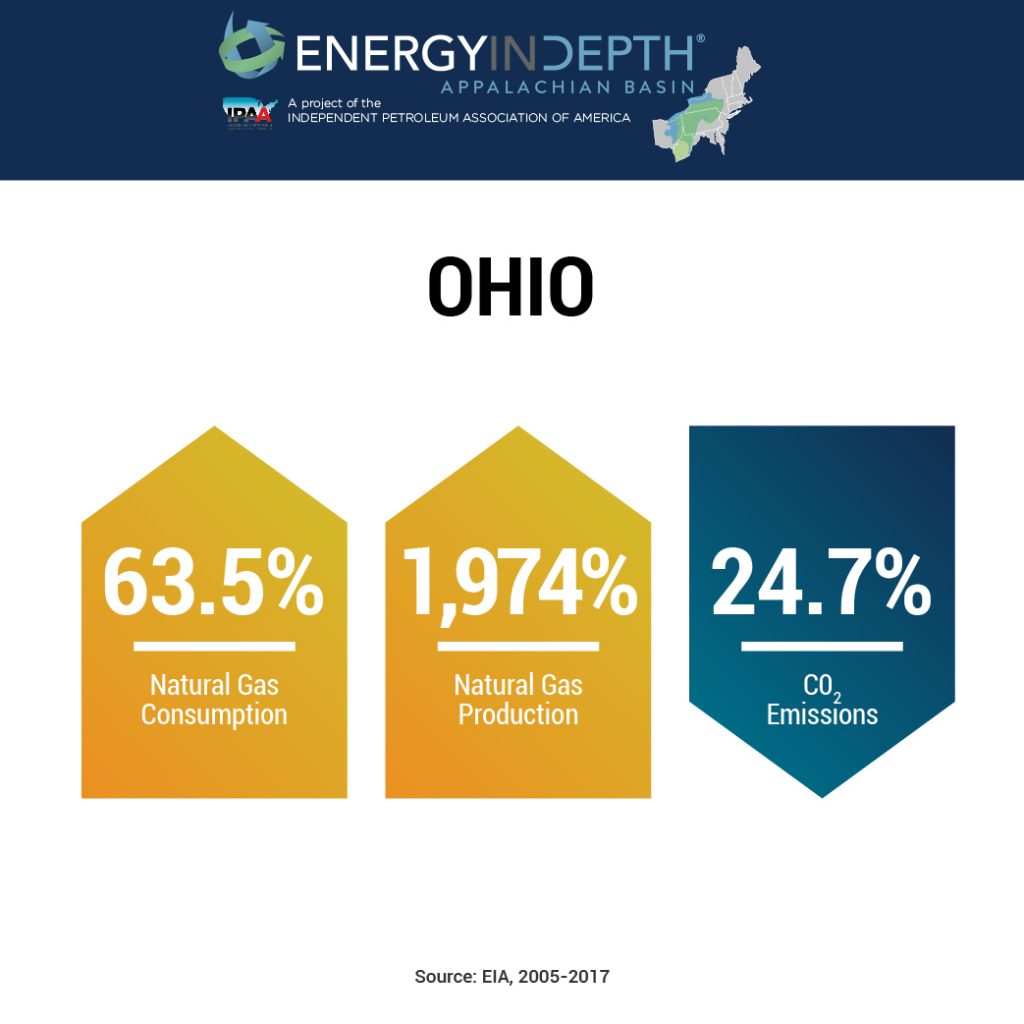 From an operator’s standpoint, Ohio’s oil and natural gas industry is subject to some of the toughest and most rigorous environmental regulations. But for producers like Ascent Resources, regulatory compliance is only the beginning, as Ascent Resources’ Environmental, Health and Safety Director Bob Adams said:

“Going above and beyond regulations is our goal, and natural gas is the key.”

Natural gas and oil development is viewed as an economic savior at the regional level. Elected officials, regional operators, and landowners work in tandem to determine the best outcome for the community and establish clear guidelines to best achieve those goals.

Larry Cain shared his story as a local farmer and landowner, describing the benefits – both at the consumer and community level – that arise when the three collaborate:

“Natural gas has truly been a blessing for this area. It’s made our farm more efficient and stronger. We worked very closely with [the oil and gas industry] to make sure we were able to keep farming on our family farm. Later this year, we’ll produce hay right up against the pad. These two industries can co-exist.”

From the audience, Harrison County’s Director of Economic Development, Nick Homrighausen, said it’s worth noting how well the industry has worked with the Ohio EPA on the permitting of important petrochemical projects such as the anticipated PTTGC facility in Belmont County.

This week’s webinar served as a reminder that environmental success and a growing economy go hand in hand when natural gas is utilized. Through community, industry, and governmental efforts, Ohio’s economic standpoint can be elevated while maintaining a healthy and safe environment for future generations.