The Ohio Department of Natural Resources (ODNR) released the second quarter production results for Ohio’s Utica shale wells. Ohio’s production continues to be strong, as the second quarter outpaced the first, even if the growth quarter-to-quarter was roughly two percent.  The state reported that shale wells produced 4,839,792 barrels of oil and 334,257,982 Mcf (334 billion cubic feet) of natural gas.

It’s important to remember that the production coming out of Ohio’s Utica shale has been staggering over the past few quarters. While these numbers may not be as large as past quarter-to-quarter increases , the overall story of Ohio’s natural gas production has in fact been pretty impressive .

Not surprisingly, of the 1,415 horizontal shale wells, 1,362 of which reported oil and natural gas production during the quarter, the top five natural gas wells were in Monroe and Belmont counties, while the top producing oil wells were in Guernsey and Harrison County.

The Ohio Oil and Gas Association (OOGA) has also been tracking the progress of Ohio’s shale production, and as you can see, in spite of reduced drilling, the overall story is that the Utica Shale is still going strong. 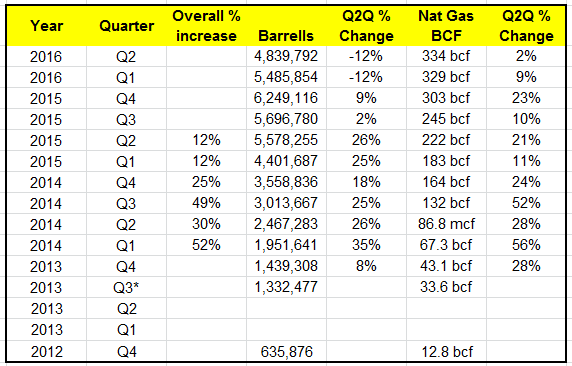