Oil and Gas Worker Safety: What You Need to Know

The same documentary filmmaker who brought us the fraudulent flaming faucets and hoses of the Gasland series is returning with a new short film that suggests oil and gas companies don’t care about their workers, and that they routinely put their employees’ lives in direct danger in order to make big profits.  That film, Gaswork, created by Josh Fox, is set to premiere on MSNBC on October 1st.

To be clear, no death or injury on the job is ever acceptable, and employee safety is and will always remain the top priority in the oil and gas industry.  The industry recognizes its work is not done until it achieves a zero injury rate in the workplace. But as most people will acknowledge, no energy development – or indeed any industry – is risk free. That is a reality that Fox and other anti-fracking groups refuse to acknowledge, and as a result, their advocacy on this issue seems more geared toward securing headlines than in having a constructive dialogue about safety.

Considering the multiple errors and deceptions of Josh Fox’s previous films, it’s likely that Gaswork will be more of the same. In light of that, let’s have a look at the facts regarding worker safety in the oil and gas industry.

Fact #1: Oil and gas industry has a far lower work risk rates than most industries

Again, while no fatality is acceptable, oil and natural gas development is safer than many other lines of work.  The Bureau of Labor Statistics’ (BLS) data show that construction, transportation and warehousing, agriculture, forestry, government, professional and business services, manufacturing, retail trade, leisure and hospitality, wholesale trade, and education and health services had more fatal injuries than the oil and gas industry in 2014. 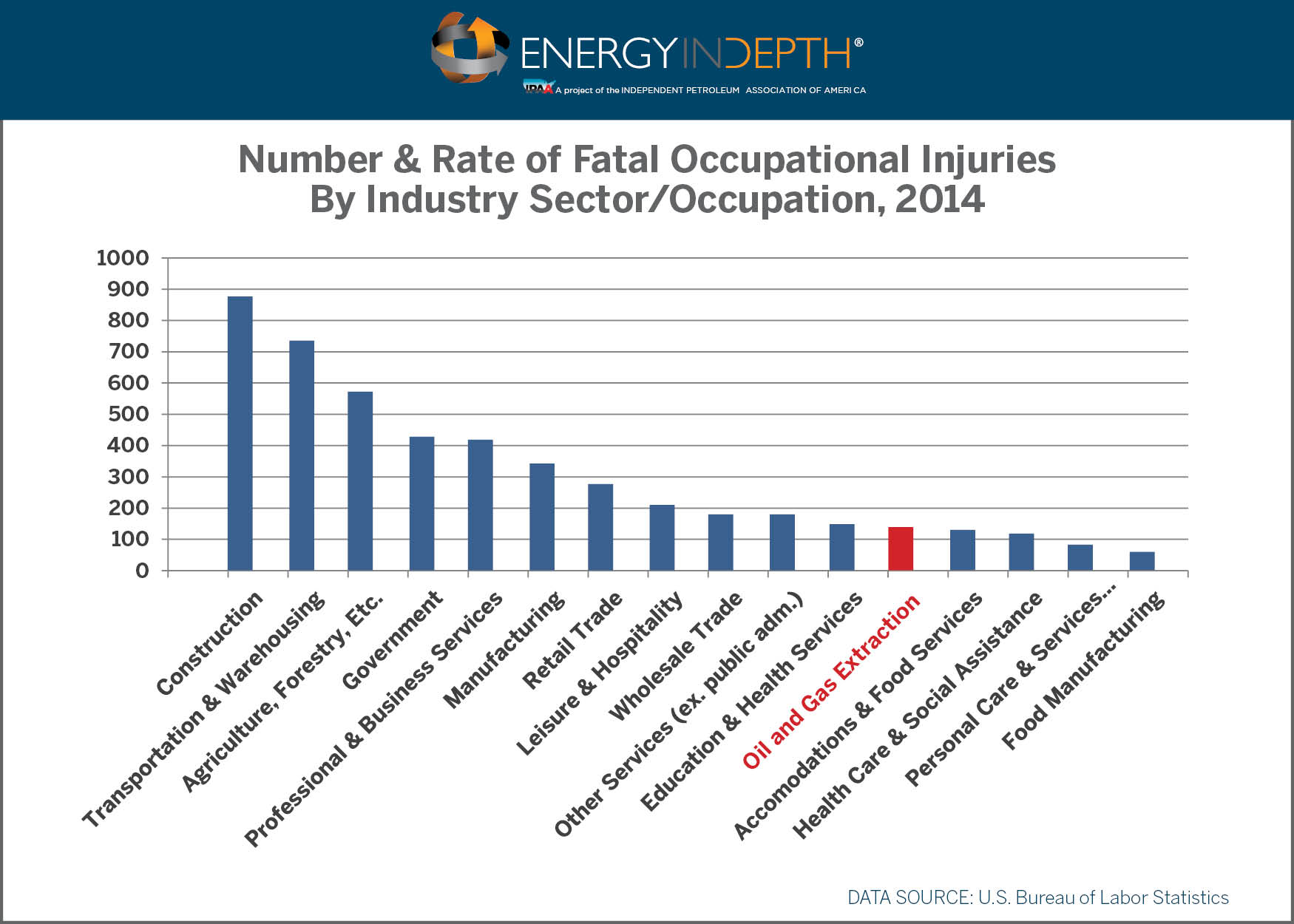 BLS has not yet published its 2014 data for nonfatal injuries and illnesses.  However, its latest data show that injuries significantly declined by 15 percent from 2012 to 2013. BLS finds the incidence rate for oil and gas is 1.3 per 100 full-time workers, which is less than half the national rate of 3.5 per 100 full-time workers across all industries and government. Again, industries like fishing, bartending, and taxi and limo drivers had far higher injury rates. Further, from 2011 to 2012, the injury rate for oil and gas fell 33 percent. 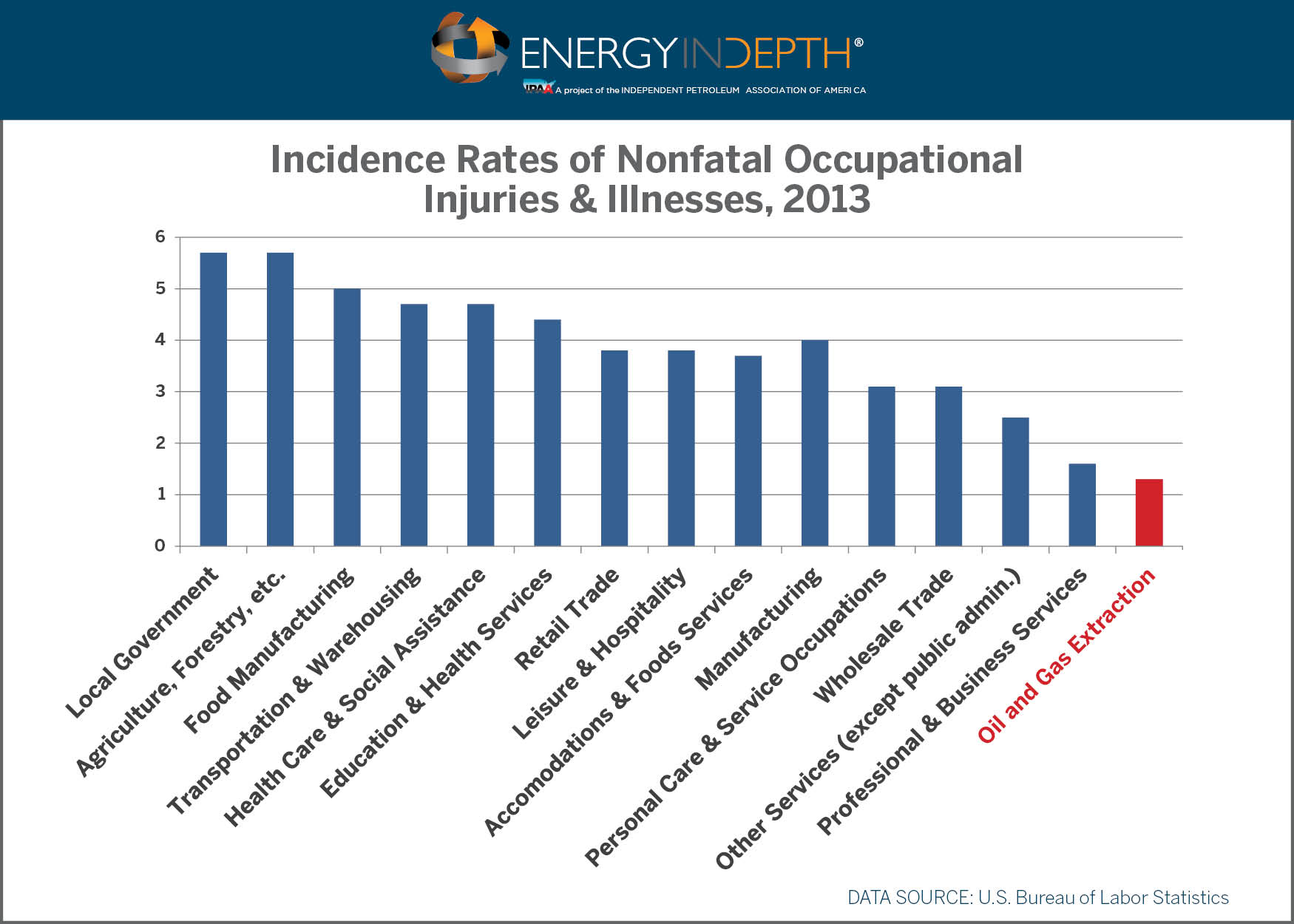 These numbers led the chief of the Occupational Safety and Health Administration (OSHA), David Michaels, to state, “This industry has stepped up to the plate” in driving down workforce injuries to levels not seen in several years.

A report by the National Institute for Occupational Safety and Health (NIOSH) also explains that “Most segments of oil and gas extraction report a lower nonfatal injury rate than the average for all private industry.”

All of this has happened amid an incredible boom in job creation in the oil and gas industry over the past few years.  According to the U.S. Energy Information Administration (EIA),

Further, from just 2013 to 2014 direct in-the-field employment in the oil and gas industry increased by almost 10 percent. It’s also worth noting that in that same timeframe the United States overall had a 17 percent increase in oil production.

These partnerships have resulted in a number of highly effective programs, including the National Service, Transmission, Exploration & Production Safety (STEPS) Network, an alliance with OSHA and NIOSH, which was founded in 2003 in South Texas to reduce worker risk with the clear vision of “Incident-Free Operations.” The STEPS program offers courses in worker safety as well as other resources for workers in twenty oil and gas states. To provide a good example of the services provided to workers, the STEPS program recently issued an alert that had “been put together through the efforts of National STEPS, NIOSH, OSHA, and representatives of the O & G [oil and gas] industry of the hazards that can be found when working around tanks containing hydrocarbons.”

STEPS’ partnership with OSHA has also led to the creation of SafeLandUSA, a volunteer organization that includes the oil and gas industry, contractors, industry associations and educators that offers a standardized orientation for workers in the onshore exploration and production industry.  Through SafeLandUSA, every oil and gas worker has the same introduction to the fundamentals of safety on the job.   As of today, SafeLandUSA has graduated 875,000 students from its safety orientation program.

STEPS also works alongside the Association of Drilling Contractors (IADC), which accredits training providers and holds them to the highest standards. Through this program oil and gas workers complete what’s called the RigPass Course.  As IADC puts it,

“Completion of an IADC RigPass or IADC RigPass Course-to-Go accredited program confirms that personnel have met basic requirements defined by safety and training professionals in the drilling industry, irrespective of the rig’s location. These programs also satisfy the SafeLandUSA and SafeGulf requirements.”

STEPS, along with OSHA and NIOSH also holds what are called “stand downs” across the country, in which OSHA, NIOSH and industry come together to discuss the most pressing issues regarding worker safety and identify best practices.   These “stand downs” are done on the regional as well as the national level.  Recent regional “stand downs” have convened in Oklahoma and North Dakota.

The Association of Energy Service Companies (AESC) is another group heavily involved in safety programs that also works closely with STEPS.  AESC hosts a number of safety conferences, such as its latest one in Fort Worth, Tex., which had seminars on a variety of safety issues, including “lifting equipment” and “working at heights,” to name a few.

There’s also the Oil and Gas Extraction Council, spearheaded by NIOSH, which meets twice a year to touch base on worker safety developments with industry. As NIOSH explains about this partnership,

“A goal of the NORA Oil & Gas Extraction Council is to identify the most salient needs of this diverse sector.  We seek to facilitate the most important research, understand the most effective intervention strategies, and learn how to implement those strategies to achieve sustained improvements in workplace practice.”

These partnerships have been overwhelmingly positive and results are that the industry is moving in the right direction.  As Eric Esswien, a Senior Industrial Hygienist at NIOSH stated recently after visiting a number of wells sites, the oil and gas industry “runs very, very safe work practices and sites.”

It’s also important to note that individual companies have launched their own rigorous safety programs under the guidance of these national programs and partnerships through OSHA and NIOSH.  For instance, Halliburton lives by a program of 10 “life rules,” with the goal of getting to zero incidents, called “Journey to 0.”  Also, as the Halliburton website explains,

“At Halliburton we start each and every meeting with a safety moment. We keep a repository of safety messages for our employees, customers and anyone who visits us at Halliburton.com. These safety messages are numerous, diverse and cover topics such as fatigue, malaria prevention, water contamination, ladder safety and heat exhaustion. To view them, simply click on the Safety messages link. Stay safe.”

The list of these safety moments can be found here.

Halliburton also requires safety briefings to be conducted every morning by the crew leader when the employees arrive on site.  In these briefings, the crew leader does a step-by-step safety talk through of everything the crew will be doing that day to make sure the safety procedures are fresh in everyone’s minds. These briefings are repeated every time a new crew comes on the site. Workers also have “stop work authority,” which means that if anyone notices a dangerous situation they are authorized to immediately halt operations.   Over the past three years, Halliburton has seen double digit improvements in incidence rates year over year, thanks to this program.

With all these positive programs in place, it becomes more and more obvious that anyone who even suggests industry doesn’t care about the safety of its workers is not basing that claim on reality.

The 32 percent decrease in North Dakota happened while the average daily rig count jumped from 180 to 190 from 2013 to 2014 and the total number of wells increased from 11,942 to 12,439 over the same period.  North Dakota had a 26.47 percent increase in crude oil production from 2013 to 2014, and the state is also our second largest oil producer behind Texas.  Further, the other two states that saw reductions are also among the most prolific oil and gas states: California is our third largest oil producer while Pennsylvania is the second largest natural gas producer. Also notable about Pennsylvania: BLS data show that development of the Marcellus Shale in Pennsylvania has created more than 15,000 direct jobs, a 259 percent increase since 2007.

Union members, who hold a large percentage of oil and gas jobs, have noted the benefits of working in the industry.  As the Associated Press recently reported, quoting Dennis Martire, the mid-Atlantic regional manager for the Laborers’ International Union (LIUNA), “The shale became a lifesaver and a lifeline for a lot of working families.”

Butch Taylor, Business Manager for the United Association of Plumbers and Pipefitters Local 396 in Mahoning Valley, Ohio recently told EID, “We have experienced a staggering uptick in man hours out of this union hall. Over the past four years, approximately 600,000 man hours, per year, have been attributed to shale gas related work”.  On average, a UA member working overtime on these projects over the past four years saw an increase of approximately $30,000 per year to their pocketbooks, thanks to an increase in overtime pay.

“Combined with upstream activity, the entire unconventional oil and gas value chain currently supports more than 2.1 million jobs. Total jobs supported by this value chain will riseto more than 3.3 million in 2020 and reach nearly 3.9 million by 2025.”

These are well paying jobs, too.  According to the Energy Information Administration (EIA), “average wages of oil and natural gas production jobs were $108,000 in 2013, more than twice the average wage for all private sector industries.” According to an Associated Press report the top five states in terms of job creation and income growth since the end of the Great Recession (North Dakota, Texas, Utah, Colorado, and Oklahoma) are all oil and gas developing states.  The Lone Star State recently surpassed 300,000 jobs in the oil and gas sector, adding 20,000 since July 2013.

Again, while no industry is risk free, the facts clearly point to an oil and gas industry that is 100 percent invested and committed ensuring the safety, so that workers can continue to have good, high-paying jobs. These are jobs that have brought a lot of hope to families, especially in difficult economic times.