The New Mexico Legislative Finance Committee (LFC) recently released its budget recommendations for fiscal year 2024, showing the tremendous recovery the oil and natural gas industry has had since the pandemic and New Mexico’s long-term confidence in the industry as a contributor to economic success. The report details:

By the numbers, recurring revenues for 2022 were nearly $9.7 billion, representing an increase of twenty percent over fiscal year 2021. On January 17, the legislature kicked off a 60-day session to decide how to spend the state’s record funds, which include more than $3.6 billion in surplus “new money” that is largely attributable to New Mexico’s energy industry.

Back to Prepandemic Production Levels 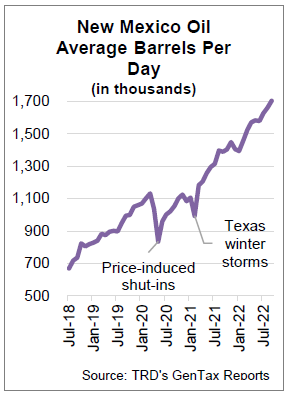 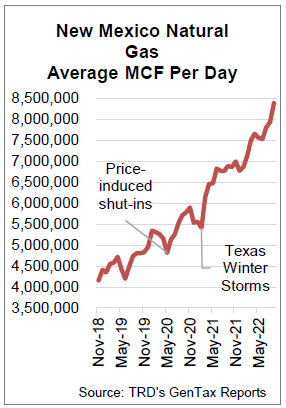 Revenues from the oil and natural gas industry are crucial to communities in New Mexico as they help fund vital programs including education and infrastructure. From the LCF budget proposal:

“Oil and gas revenue strength is pushing severance tax and federal royalty collections high above their five-year averages, resulting in large transfers to the early childhood trust fund and boosting the amount reaching the general fund throughout the forecast horizon.”

Joe Vigil, spokesperson for the New Mexico Oil and Gas Association, expanded on this further in a statement to the Carlsbad Current Argus:

“Oil and gas money is necessary to New Mexico to fund public services like education and roads, providing about a third of the state’s budget each year since 2014. He said oil and gas in New Mexico generated about $63.3 billion in industry revenue, contributing about $5.3 billion to state and local governments in the past year.”

For New Mexicans to continue to experience the benefits deriving from a robust oil and gas natural industry, New Mexico will need to continue investing and cultivating its production capabilities. The federal government must do its part as well – an active federal lands leasing program is essential to incentivize continued energy production in New Mexico. In 2021, approximately 54 percent of oil production and 60 percent of natural gas production took place on federal lands.