American consumers and businesses can count on the strongest energy security in a generation thanks in no small part to oil and natural gas produced right here at home, according to the Global Energy Institute’s annual Index of U.S. Energy Security Risk. 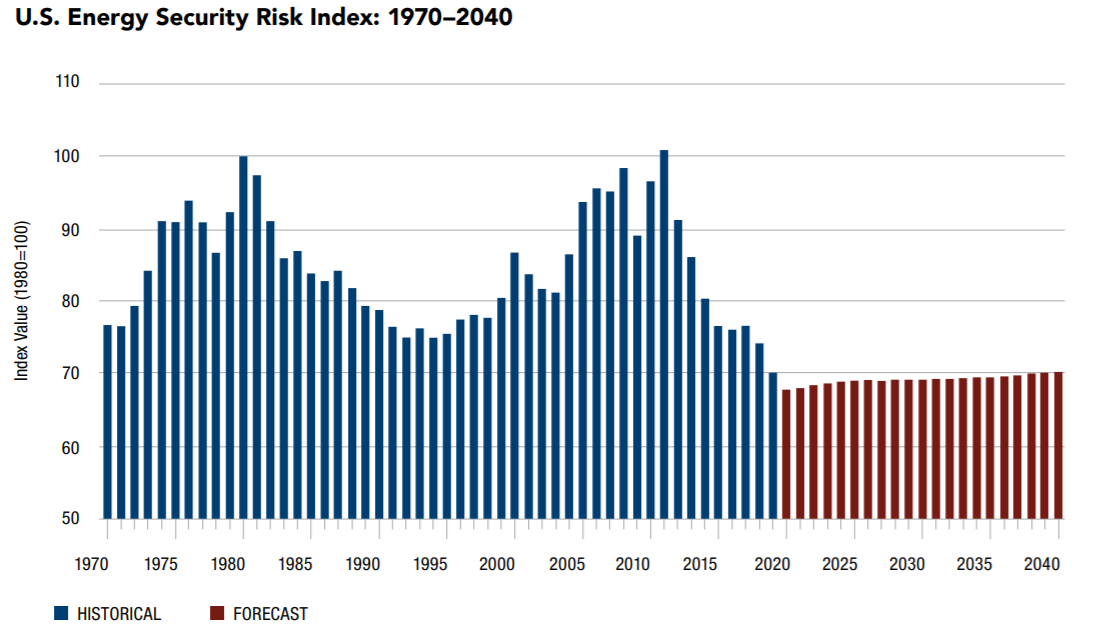 The record low energy risk score in 2019, and the positive, steady fall in recent years, is testament to the innovation, leadership, and workforce in the U.S. oil and natural gas sector, as the report states:

“In the eight years since the U.S. risk score peaked in 2011, it has tumbled 30%, an unprecedented rate of decline.

“…The importance of the U.S. shale revolution in driving these remarkable improvements cannot be overstated. The application of hydraulic fracturing, horizontal drilling, and advanced seismic imaging has unlocked a tremendous oil and gas resource, turning energy scarcity into abundance.”

These tremendous production numbers, and other innovative technologies, has helped the United States achieve an important energy security milestone it hadn’t attained in nearly 70 years and helps ensure the economy isn’t dependent on foreign energy sources:

“The United States produced more total energy than it consumed in 2019, making us a net exporter of energy for the first time since 1952. This resulted from a combination of a very large increase in domestic oil and gas production on top of steadily improving energy efficiency and conservation.”

The report notes that domestic oil and natural gas production increased by 11.3 percent and 10.6 percent respectively in 2019, and that reality is reflected in the chart below showing the nation’s rapidly decreasing dependence on imports of those fuels:

The United States is also benefitting from innovation and technological growth in energy efficiency programs, many driven by industry, as the report states: “All metrics measuring energy use efficiency or intensity risks showed improvement in 2019, with five metrics showing their lowest (best) score in the record since 1970.”

“Based on EIA’s AEO 2020, we expect an average U.S. risk score of 69.3 from 2020 to 2040, ranging from 67.9 to 70.4. These are by far the lowest projected figures we have ever calculated using EIA’s annual forecast, the first time in 2010 (Figure 2). Continued high domestic energy output coupled with better energy efficiency and environmental performance are some of the factors contributing to this very positive forecast.”

The 2010s show the vital role that oil and natural gas play in supporting the American economy and strengthening energy security, and it’s clear this positive momentum can be maintained in the future through strong domestic output.