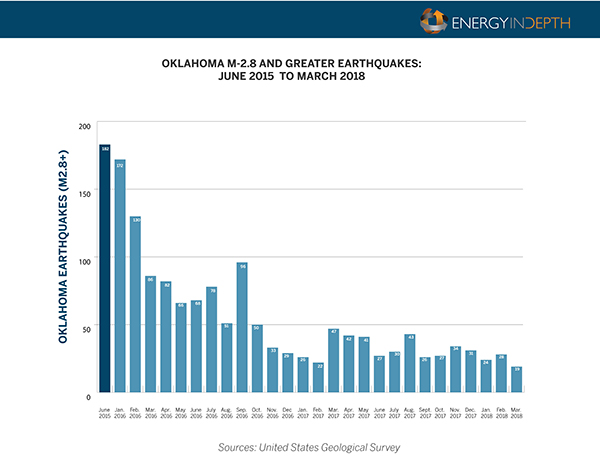 The United States Geological Survey (USGS) acknowledged this week in its annual report forecasting both natural and induced seismicity potential in the eastern and central United States that Oklahoma earthquakes have declined “rapidly” since measures to reduce wastewater disposal volumes were introduced in 2015. From the report:

Oklahoma regulators implemented measures in 2015 that either shut in or reduced volumes of injection for more than 700 disposal wells throughout a 15,000-mile “Area of Interest,” reducing wastewater injection volumes 40 percent from 2014 levels. And though these more than a dozen directives have resulted in a “significant economic impact,” they have not only been largely supported by industry, but have proven effective.

An EID review of the latest USGS data reveals the number of “felt” Oklahoma earthquakes — those registering magnitude 2.8 or greater on the Richter scale — continued to fall significantly in the first quarter of 2018. The daily average of felt earthquakes during the first three months of 2018 was 79 percent below levels seen in Oklahoma’s most seismically active year of 2015 and also 27 percent below last year’s daily rate.

As the following EID chart shows, Oklahoma’s monthly earthquake totals have declined dramatically since 2015. For instance, the number of felt earthquakes this past March (19) was 90 percent below the number experienced at the height of the state’s seismic activity in June 2015.

These most recent declines come after the monthly average of felt earthquakes fell 58 percent from 2016 levels in 2017 and 71 percent from the most seismically active year of 2015, as EID previously reported.

These declines’ correlation with wastewater disposal reductions further illustrates the fact that the latter — not hydraulic fracturing, a completely separate process — has been the primary cause of Oklahoma’s induced seismic activity.

The first sentence of the USGS’s list of myths and misconceptions regarding induced seismicity notes that, “Fracking is NOT causing most of the induced earthquakes,” further clarifying that: “Wastewater disposal is the primary cause of the recent increase in earthquakes in the central United States.”

“Most of the wastewater comes not from hydraulic fracturing operations, but rather from producing wells. The water exists in the producing formation and comes up with the oil and natural gas.”

In fact, approximately 95 percent of the wastewater disposed of in Oklahoma disposal wells is formation water, which is co-produced with oil and gas whether a well has been hydraulically fractured or not. Approximately five percent is used fracking fluid, sometimes called flowback.

These facts explain why Oklahoma has managed to significantly reduce seismicity at the same time drilling activity (and fracking) has surged since early 2017.

Oklahoma’s average weekly rig counts have nearly doubled from levels seen in early 2016, while the state’s oil production increased eight percent in 2017 from 2016 levels, reaching its highest annual average since 1984. For the third time in four months this January, Oklahoma achieved its highest monthly production total since the Energy Information Administration started tracking state-level production in 1981.

Though the USGS report notes that Oklahoma’s seismic hazard level remains elevated this year, the report emphasized that the threat of larger earthquakes capable of widespread severe damage is far lower than that of California, contrary to what a number of sensational media reports have claimed:

“The short‐term hazard levels for Oklahoma are similar to short‐term hazard calculated in the more seismically active regions of California. This does not imply the long‐term hazard in California and Oklahoma are the same; California has historically experienced many large and great (M∼8.0) earthquakes that have caused extensive damage. Historically, Oklahoma has not experienced earthquakes greater than M 5.8, and although it is possible that larger earthquakes could be generated by ruptures that link across multiple faults in tectonically active regions (e.g., Hamling et al., 2017), this has not been observed in Oklahoma. Larger earthquakes in Oklahoma only have a small chance of occurrence in our model.” (emphasis added)

For perspective, Oklahoma Geological Survey Director Jeremy Boak recently noted that the seismic energy of all of Oklahoma’s earthquakes since 2009 adds up to the equivalent of just one M-6.1 earthquake; California has had two such 6.1-or-greater quakes since 2014.

Though state regulators have noted “Oklahoma is not out of the woods yet” when it comes to solving its induced seismicity issue, this latest data is certainly encouraging and further illustrates that mitigation measures aimed at reducing seismic activities are yielding positive results.