After a string of failures in recent years, outside “ban fracking” activists are once again descending on Colorado’s communities, attempting to derail the local debate over energy production as part of their campaign to ban oil and natural gas development at the state level and nationwide.

This evening, the city and county of Broomfield, Colorado, will convene to discuss a proposed moratorium on oil and natural gas development in the area. Energy In Depth had hoped that tonight’s meeting would be a continuation of the fact-based discussion we saw during last week’s oil and gas forum, but the new flurry of activities by national “ban fracking” groups in Broomfield raises questions about what these groups will do today to promote conflict, disrupt proceedings, and prevent local officials from engaging in constructive dialogue about energy development in their communities.

After focusing their efforts on a “ban fracking” protest in Denver last week – where rumored gubernatorial candidate State Rep. Joe Salazar said supporting fracking would “relegate me to the depths of hell” in “spirit world” – national groups such as Food & Water Watch (F&WW) and 350.org are now circulating a petition to “help stop fracking in Broomfield neighborhoods” and organizing a protest – or “[s]olidarity action” – outside the meeting tonight.

These efforts are led by 350 Colorado “Fracking Specialist” Lauren Swain, who heads the Sierra Club’s “Beyond Oil & Gas” campaign in Denver, is a member of the group’s national “hydrofracking grassroots team,” and, as a perennial “ban fracking” activist in Colorado, has once suggested abolishing the oil and gas regulatory agency in the state. 350.org’s work in Broomfield is supported by F&WW, which is offering to drive protestors to Broomfield this evening. 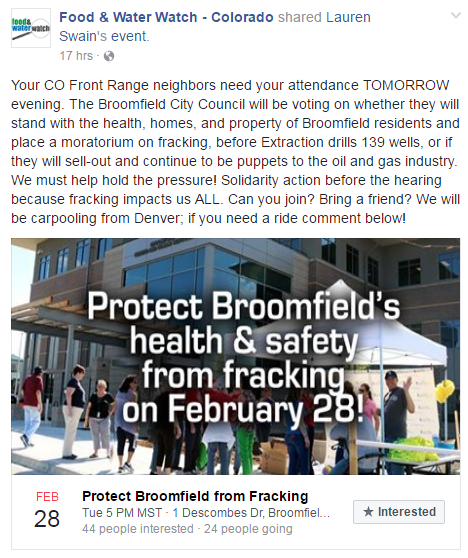 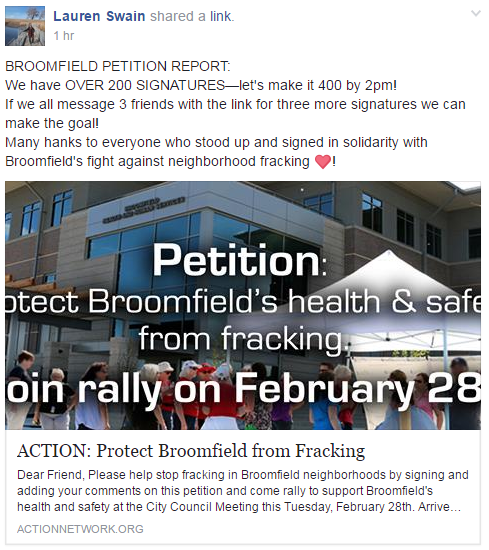 350.org and F&WW have a long history of attempting – and failing – to ban oil and natural gas development in Colorado. Last year, they pushed “ban fracking” measures that failed to win enough public support to make the ballot. Notably, they boasted that they had collected so many signatures that they needed a U-Haul truck to deliver them to the Secretary of State’s office, but the media quickly uncovered that the boxes they delivered were in fact “half-empty.”

Banning fracking is part of 350.org’s “keep it in the ground” campaign, which seeks to ban the production of oil, natural gas, and coal – the energy sources that provide 81 percent of the country’s power. The group’s co-founder Bill McKibben, who failed to draw a crowd at a “ban fracking” rally in Colorado last year, once penned a piece titled, “How to drive a stake through the heart of zombie fossil fuel.”

F&WW, 350.org’s partner in “ban fracking” activism, is one of the “major players behind the anti-fracking movement” in Colorado, according to The Colorado Statesman, that “played a key role in supporting initiatives to ban or delay fracking in local communities,” including Broomfield. As part of its agenda to ban fracking nationwide, F&WW is also behind the creation of statewide groups such as Frack Free Colorado, Protect Our Colorado, Local Control Colorado, and Coloradans Against Fracking.

Attempting to disrupt good-faith discussions between residents, town officials, companies, and state regulators is a trusty move in the “ban fracking” playbook that activists have repeatedly deployed in the past to zero success. In 2012, F&WW declared Erie, Colorado, “ground zero” for the group’s campaign to ban fracking nationwide. Three years later, F&WW rebooted the same campaign in Erie, deploying the same tactics it is using in Broomfield today: a petition pushing a moratorium on fracking and urging activists to attend Erie’s Board of Trustees meetings to “tell Erie officials loud and clear that fracking is a violation of our human rights and if they don’t stop it, we will.”

Energy In Depth remains hopeful that facts – not activist rhetoric – will prevail in tonight’s discussions about oil and natural gas development in Broomfield, and that council members will focus on the data-backed testimonies from state officials and regulators instead of the same, tired slogans activists have used and reused that Colorado communities have rejected time and time again.