PA Celebrates While NY Sits On The Sidelines

I live just outside of Buffalo, N.Y., and my community prides itself on having a festival for every occasion. Just in the past couple weeks, you could attend the Italian Heritage Festival (lots of great food and music),the Macedonian Festival (ditto above, but swap out Italian sausage for lamb kabobs),  the Infringement Festival (cutting-edge performance art and theatre), the National Garden Festival featuring a Garden Walk in almost every neighborhood, Angelica Heritage Days…I could go on and on.

Next week in Pittsburgh, the Marcellus Shale Festival will feature exhibitors,  a Town Hall meeting  broadcast on KDKA Radio, educational sessions, screenings of FrackNation with talk backs with Phelim McAleer and Ann McElhinney, and even a concert — all for a $5 donation to the Mel Blount Youth Home.  Check out the complete schedule here.

Two things about the event intrigue me: First, it’s sponsored by a diverse and lengthy list of supporters, so admission is only a suggested charitable donation; and it’s a summer festival, not a protest. Wow!

Second is the town hall meeting. Its title – “Marcellus Shale – A True Public-Private Partnership: Maximizing the Resource” – indicates that shale drilling benefits more than the operators and landowners. It’s a partnership to serve the community. While the panelists are elected officials and an industry representative, the title suggests a much broader content that reflects the big picture, like reduction in school taxes, more revenue for libraries, schools, 911 services, and community partners.

Then on September 7th, saddle up for the Pennsylvania Energy games in Hughesville, PA.  Sponsored by the “people who bring you energy,” according to the website, the day is a hootin’ hollerin’ day of industry cowboy fun. A heavy equipment rodeo, more displays, a safety competition, and live music  help drive home an important message: the natural gas industry is here to lower our tax bills, reduce unemployment, and keep our environment clean and green – all while further encouraging a spirit of community. 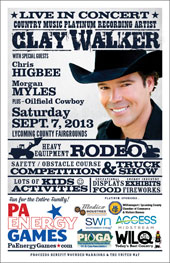 At this point, if anyone were to mention a Marcellus Shale outdoor event in the summer in New York York State, it may conjure up images of street theater, and with plenty of complaints and accusations to wit. There would be lots of angry voices and finger pointing. A scattering of stories, maybe a poem or two, and plenty of misrepresented anecdotes would intertwine themselves in such a “festival.”

That’s really too bad, especially since the obstacle to development in New York is pure politics. In the meantime, New York is waiting for the party to begin.