This week, the Pa. Department of Environmental Protection (DEP) announced its intention to fine Range Resources nearly $9 million for what it characterized as methane migration events in eastern Lycoming Co. DEP secretary and former head of PennFuture, John Quigley, told the Pittsburgh Post-Gazette, “We wouldn’t assess this severe penalty if we were not confident the well was the source of the pollution.” But DEP is taking this step despite findings from pre-drill water tests that show existing methane in the area and isotopic signatures that don’t match those found in the natural gas well being blamed for the contamination. DEP is also disregarding testing on the well in question, which suggest it’s not even leaking in the first place.

Let’s take a look at what the actual tests have shown. For a full timeline, test results and analysis of the findings, be sure to read Range Resource’s Final Report.

In November 2010, Range Resources conducted pre-drill water tests of all properties that would be within 2500 feet of its Harmon Lewis Unit 1H (Harmon) well in and around Green Valley Road in Moreland Township. The extent of this testing went above and beyond what was required at the time, as DEP did not increase the ‘presumption of liability’ from 1000 feet to 2500 feet until Act 13 went into effect in 2012. The initial testing area falls within the circle on the following map from the final report: 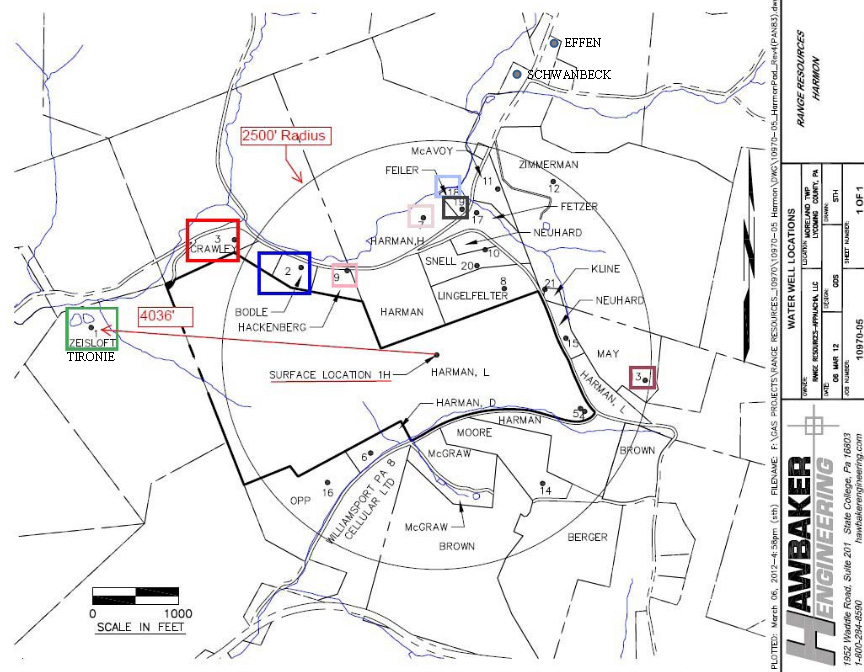 Drilling of the Harmon well took place in February and March of 2011 and then the well was hydraulically fractured in June. Prior to Range being notified of the first complaint six months after completing the well in January 2012, the region experienced major flooding from Hurricane Lee in September.

Weather Can Impact Methane in Groundwater

Mr. Quigley is very much aware of the incredible impacts Hurricane Lee had on our region. Back when he was with PennFuture, he asked “folks to do some weekend driving, with cameras and notebooks” during the heavy flooding to find “evidence of any frackwater ponds breached or overflowing . . . or other enviro damage from the flooding.” Now, all of that aside, the flood is important to note for other reasons.

First, the streams and creeks in Eastern Lycoming County were hit hard from the floods. I actually live just off of Green Valley Road, close enough to the Harmon that our water well was included, along with 53 others, in the second round of testing that went out 4000 feet from the gas well. More on those tests in a minute. My point in bringing this up now is that not only were the creeks so bad that I wasn’t able to get home from an event I had been at earlier that day, but our water well had serious issues for a couple of weeks after. And not just turbidity, as methane causes.

The swell of water collapsed stream banks in the area and caused our water well, which sits in a natural spring in Sugar Run, to be overwhelmed with sediment. For those of you who don’t have private water wells, that means the water coming out of my faucets was brown and filled with dirt—the heavy rains the past couple of weeks have actually caused this to occur again. Why? Because weather and outside influences can impact the condition of water wells, especially if those water wells, like many in Pennsylvania, are not properly cased or constructed.

Can you guess what else can be influenced by weather changes? The amount of methane in a well and the pathways it takes to get there. According to Tom Copley in an EID guest post he wrote in 2012,

“The general rule is that stray natural gas moves from areas of high pressure to ones of lower pressure. However, several factors can come into play that influence migration.  These include changes in barometric pressure, porosity and permeability of soil and bedrock, temperature differentials, rain or snow.”

So just to recap: the Harmon well was finished being hydraulically fractured on July 1, 2011, a major flooding event occurred three months later in September, and three months after that in January, DEP notified Range of complaints of methane in private water wells.

The complaints in January came from the Bodle, Crawley and Tironie properties. The Bodle well already had methane prior to drilling, as mentioned above, and the Crawley and Tironie wells were outside of Range’s initial testing parameters. In the case of the Tironie well, it’s actually 4,036 feet from the gas well—my water well is actually closer to it than theirs is—but nonetheless, Range provided methane detection alarms and drinking water to all three families, and vented their water wells.

The company also expanded their testing in February to include 54 water wells within 4,000 feet of the Harmon well, and wasn’t able to detect any methane in any structures on the properties including ours. They did, however, agree to install vents on two additional water wells, the Effens and Finklers.

“Range’s investigation included methane, ethane and propane testing and isotopic analysis of those dissolved gases. Range also sampled and tested for 26 other ground water constituents.. Any constituent tested that may have been greater than the minimum requirements for the state’s primary drinking water standards, or Maximum Contaminant Level, was consistent pre and post-Harman Lewis Unit 1H when pre-drill data was available.” (Final Report page 23, emphasis added)

“As early in this investigation as March 7, 2012, Dr. Scott A. Stout, Ph.D., P.G., of NewFields Companies, LLC provided Range and Pa.DEP a detailed report unequivocally stating that his analyses of 22 gas samples collected from 21 residential water wells showed “that the hydrocarbon gas in the groundwater from the residential wells is isotopically and compositionally distinct from the gas produced from Range’s Harman Lewis Unit 1H gas production well” and “[t]hus, the available data show that Range’s Harman Lewis Unit 1H gas production well is not the source of dissolved gas in any of the 21 water wells studied.” Unknown to Dr. Stout and Range at that time, his analyses and conclusions would be confirmed a year later by data provided by Pa.DEP documenting isotopic and compositional analyses of water well samples analyzed before the Harman Lewis Unit 1H well was drilled.” (Final Report, page 23, emphasis added)

Now, while Range may have chosen to develop only one well in the area, Penn and Moreland Townships, where Green Valley Road is located just outside of Hughesville, are some of the most heavily developed areas of Lycoming County for natural gas. As such, DEP was actually able to provide Range with pre-drill tests for some of the properties in question, despite Range not having tested that far away initially.

“On October 2, 2012, Pa.DEP provided additional isotopic and compositional data that effectively confirmed the distinctions originally described by Dr. Stout in the Green Valley water well gases when compared to the gases in the Harman Lewis Unit 1H well…The figure below, which includes the Pa.DEP data received by Range on October 2, 2012, illustrates and proves the point.” (Final Report, page 26, emphasis added)

The DEP’s own data found that the isotopic signatures didn’t match and methane was present prior to drilling the Harmon.

“The Pa.DEP’s pre-drill data from Effen and Schwanbeck properties taken 11 months prior to drilling the Harman Lewis Unit 1H well unquestionably demonstrate the presence of high concentrations of methane were the Green Valley Rd. groundwater as early as March 2010. Also, Dr. Stout’s supplemental analysis of the Effen and Schwanbeck pre-drill compositional data concludes that these gases in these water wells are different from each other – and different from the Harman Lewis Unit 1H well gases. (Final report, page 29, emphasis added)

Range also sampled the wells in question twice in April, twice in May, and performed a split sample test with DEP in June. All tests led to the same conclusion—the methane wasn’t coming from the Harmon well.

Not only is DEP claiming the Harmon well contaminated water supplies despite the aforementioned test results, but they are also saying the well is still doing so and has yet to be remediated. Wait what? 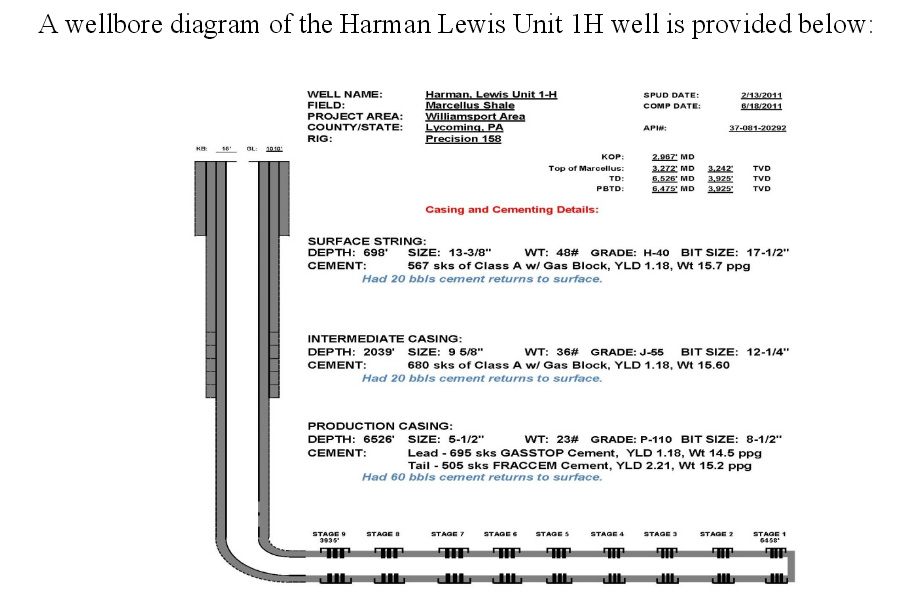 “…The significance of the 70% plus bond index for six continuous feet is that field studies and Mr. McBeath’s experience have shown that is more than sufficient to achieve hydraulic isolation. In addition, the temperature survey and noise logs do not indicate any fluid movement outside the 5 ½” casing. Again, indicating that the Harman Lewis 1H well has mechanical integrity.” (Final Report, page 19, emphasis added)

Range performed extensive tests on the Harmon well back in March 2012. These included cement bond, acoustical and temperature logs, and additional pressure tests later in the same year.

“The testing of the Harman Lewis 1H well, specifically the testing performed in March 2012, proved that there is hydraulic isolation between stratigraphic layers in the subsurface preventing flow between zones behind the 5-1/2″ well casing. In short, the March 2012 well, temperature, and noise logs confirmed that there is zonal isolation behind the 5-1/2″ well casing. (Final Report, page 18, emphasis added)

In laymen’s terms—the well isn’t leaking out of the casing into groundwater.

“John C. McBeath, a petroleum engineer and licensed Professional Engineer in Texas, Wyoming and California with more than 25 years of well log analysis experience, determined the cemented 5-1/2″ production casing of the Harman Lewis 1H well is in compliance with industry standards, and the well does not have defective, insufficient or improperly cemented casing.” (Final report, page 18, emphasis added)

Pre-Existing Methane is a Reality in NEPA

The people living on Green Valley with methane, includes some of our family that live about a mile and a half from the Harmon well and have had to vent their water well since the 1990s, long before any natural gas wells came into the area. While they had tested the water when they bought their house, many residents had never had water testing prior to the first companies going around for pre-drill samples.

According to Penn State University in a recent Pittsburgh Tribune Review article,

“About 22 percent of private water supplies in the state have detectable natural methane, and many of the 1.2 million private wells have never been tested.”

Also from the article,

“These stray gas problems have been around a long time. I’ve been investigating them for more than 20 years,” said Fred Baldassare, the owner of Echelon Applied Geoscience Consulting in Murrysville. Baldassare spent 25 years with the DEP.

The reality is we live in a methane rich area that has a history of methane getting into water, as both DEP and Range’s pre-drill tests confirm.

One has to wonder what data DEP is using to justify this penalty when the water tests, mechanical integrity tests, history of the region and isotopic signatures all show the Harmon well is not responsible for the methane issues in the area. In fact,

“Ultimately, Dr. Stout determines “it is not only unreasonable to consider the Harman Lewis Unit 1H well as the source of methane in groundwater along Green Valley Rd., the isotopic data provided to Range by PaDEP in January 2013 clearly show multiple (i.e., Effen-like and Schwanbeck-like) sources of methane existed in the area’s groundwater prior to drilling of the Harman, Lewis Unit 1H well in Feb. 2011.” (Final report, page 29)

It’s still up in the air as to why DEP chose now, years later and after tests showed the methane pre-dated the Harmon and did not match isotopic signatures within it. EID’s former Marcellus Director, Tom Shepstone, has a few ideas for the department’s decision to do so. Regardless of the rationale, Range issued a notice of appeal over DEP’s findings earlier this month and it will now be up to the Environmental Hearing Board to make a final decision on the matter.