EID has been exposing the underhanded “Keep It In the Ground” (KIITG) tactics aimed at halting oil and gas development in the Wayne National Forest for years, including the  Center for Biological Diversity’s (CBD) deliberate efforts to obstruct the federal mineral leasing and permitting process.  Keep Wayne Wild is another example that has taken a page out of this KIITG playbook, working in conjunction with CBD to ban fracking in the Wayne under the guise of a so-called “local volunteer concerned citizens organization.”

According to Keep Wayne Wild’s filing with the Ohio Secretary of State, the self-described “volunteer environmental conservation organization” is actually a for-profit Limited Liability Company (LLC) whose spokeswoman is listed as a current employee of the Sierra Club. Keep Wayne Wild, LLC also has direct ties to the Ohio Health Registry, Buckeye Forest Council, and the Heartwood—groups that have been active in multiple protests and lawsuits involving the Wayne National Forest. 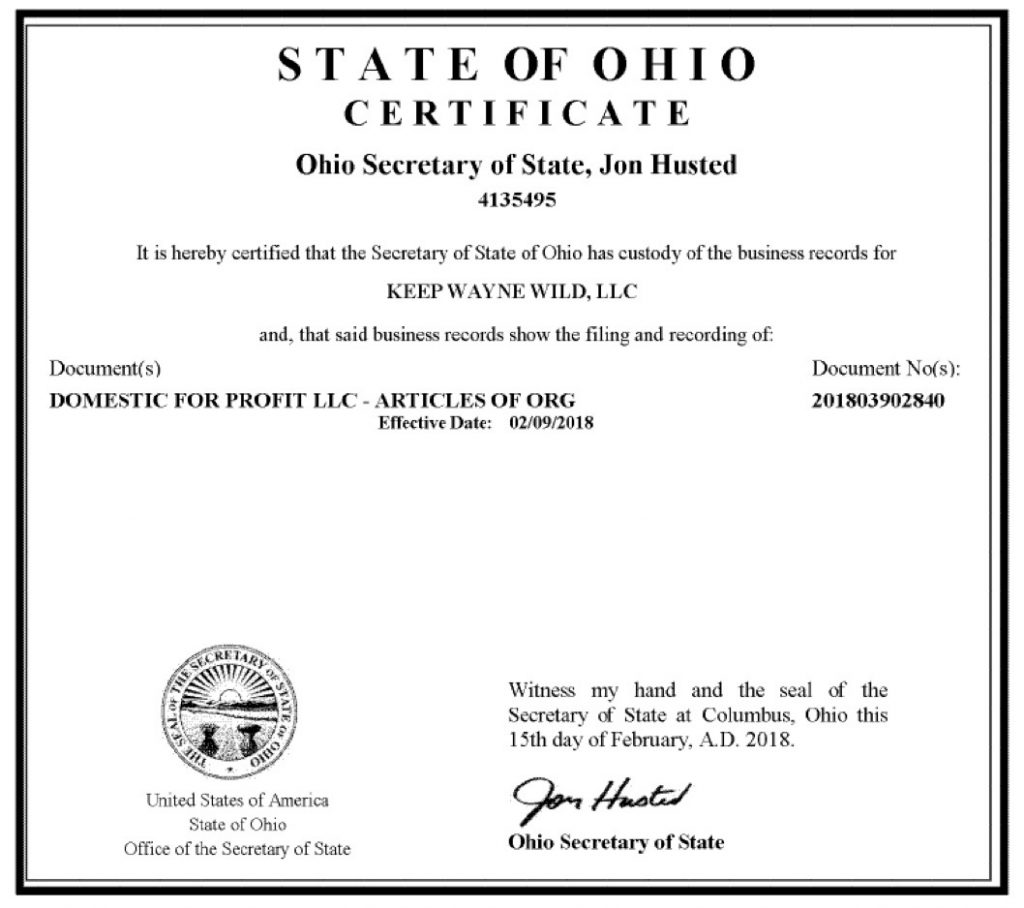 Though Keep Wayne Wild, LLC has officially been a for-profit business much of this year, it was originally established as a California-based nonprofit called SprouTogether in 2016. SprouTogether’s initial Ohio focus was on preventing the Bureau of Land Management (BLM) from allowing the leasing of federal minerals in the Wayne National Forest. SprouTogether also led a failed fundraising and mobilization effort on Fundly.com, which coincided with the national attention that #NODAPL was receiving at the time. 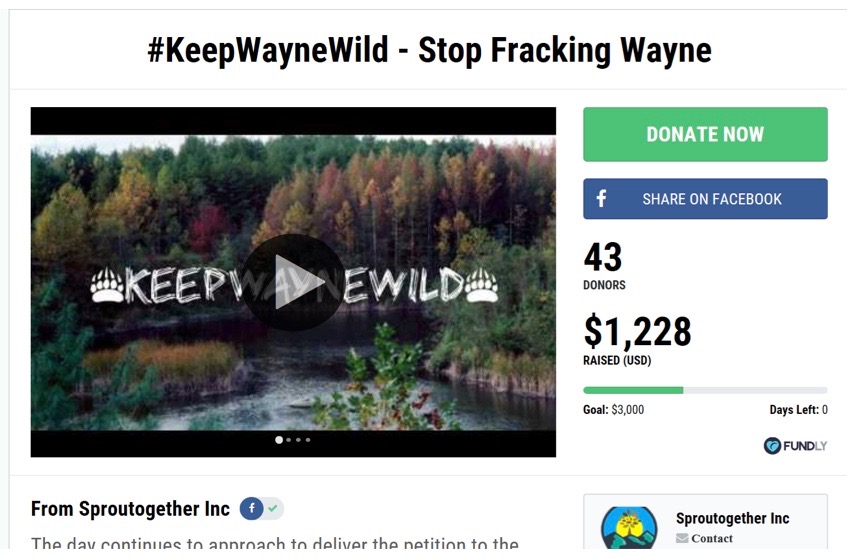 In 2016, BLM agreed to lease federal minerals in the Wayne after finding “no significant impact” to the forest, resulting in Keep Wayne Wild going virtually silent from November 2016 until March 2017.

Then in March 2017, Keep Wayne Wild, LLC reemerged as a “new group” now based in Columbus, and hosted its first event as this “new” entity – a year before it received its business filing with the Ohio Secretary of State. That same month Keep Wayne Wild, LLC launched its website, using a disturbing anti-fracking video from Appalachia Resist! — perhaps the most rogue fringe activist group in Ohio – whom the company admits they “coordinate and cooperate” with. And despite at the time of this launch not yet being official with the state, included the ability to “donate” on its website.

In fact, it wasn’t until February 2018 – nearly a year after its new website launched – that Keep Wayne Wild, LLC received its for-profit status business certification, and days later, officially joined forces with CBD and others by adding its name as a “conservation group” to CBD’s press release  protesting leasing in the WNF. Following the press release, Keep Wayne Wild, LLC filed an administrative protest challenging BLMs the upcoming federal mineral auction lease sale.

CBD and Keep Wayne Wild, LLC hailed a small victory in September after oil and natural gas permits were delayed and a federal auction lease sale was put on hold– a victory that was reversed in October when BLM issued both permits to drill and announced for the previously halted lease sale will occur in December. Just a few days later, the business launched a social media campaign and event in Columbus asking for legislative opposition to Ohio Senate Bill 250, a bill Keep Wayne Wild, LLC claims takes away the ability to conduct protests like those that have occurred about the Wayne National Forest. 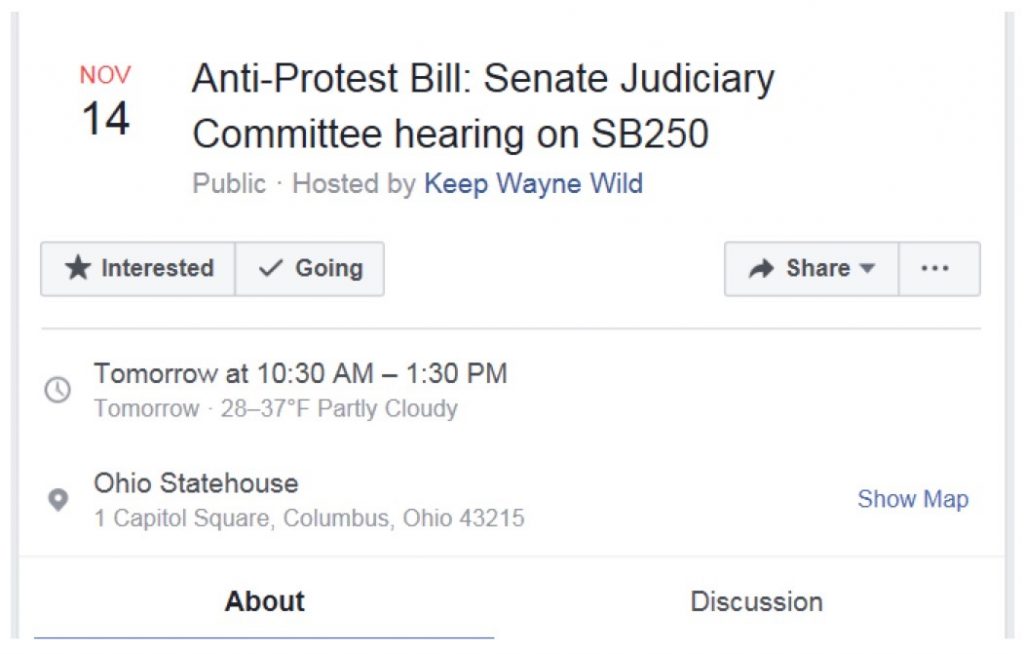 The bill, authored by Ohio State Senator (and Navy SEAL) Frank Hoagland would “prohibit criminal mischief, criminal trespass, and aggerated trespass on a critical infrastructure facility, to impose fines for organizations that are complicit in those offenses, and to impose civil liability for damage caused by trespass on a critical infrastructure facility.”  Not surprisingly, Keep Wayne Wild, LLC and the Sierra Club are tied at the hip on this protest, and if you look at the calls to action and who’s planning to attend this event, you’ll see the same cast of characters that are at all of the Sierra Club events.

As EID has repeatedly pointed out, the smoke and mirrors campaigns being used by the small contingent of Ohio anti-fracking groups is seemingly never ending, and Keep Wayne Wild, LLC’s antics are just the latest example. As a case-in-point, Keep Wayne Wild LLC’s Statutory Agent and spokesperson, Ms. Becca Pollard, claims she is still employed by the Sierra Club, according to a LinkedIn page, is a former employee of Buckeye Environmental Network and is currently a member of the Board of Directors of the Heartwood.

Here we go again – another fake, so-called “local volunteer group” in Ohio. Keep Wayne Wild, LLC is anything but local, or simply volunteers, as it would have the public (and the media) believe. Instead, Keep Wayne Wild, LLC is a for-profit business that is using its website as a portal to ask for donations to support the Ohio Environmental Council’s lawsuit against BLM and the U.S. Forest Service. It is also seeking legislative support on statehouse issues, as well as petitioning signatures.  It’s clear that the Columbus-based Keep Wayne Wild, LLC, is in fact getting paid to protest, lobby, and organize for profit, off the backs of an issue impacting southeastern Ohio – not a Columbus-based business.

By contrast, “we the people,” the neighbors and landowners in and around the Wayne National Forest (the people who actually live in the region) have made their voices heard during the debate over leasing of federal minerals, and time and time again have made it clear that they are supportive of oil and gas development in the Wayne.