Similar to numerous past campaigns attempting to link fracking to water contamination, ongoing litigation against Range Resources has generated a lot of misleading coverage that misses the important fact: independent bodies have repeatedly found such allegations to be unfounded.

On Oct. 6, Washington County Court of Common Pleas entered a summary judgment dismissing a lawsuit that alleged that TestAmerica, a water testing laboratory engaged in “fraud and civil conspiracy” with Range by “producing and permitting to be produced incomplete and allegedly misleading test results.”

Judge William Nalitz ruled that “There were no altered results” and due to a lack of clear and convincing evidence (among many reasons cited in the memo explaining the decision) TestAmerica’s conduct “does not constitute fraud according to Pennsylvania law.”

The allegations against Range regarding the Yeager location have now been rejected six times by independent parties and no fewer than four government agencies — Pennsylvania DEP, U.S. EPA, U.S. Agency for Toxic Substances and Disease Registry (ATSDR) and the Department of Health and Human Services (HHS).

Here is a quick review of each instance:

A quick review of the memo explaining Judge Nalitz’s dismissal of the recent fraud lawsuit reveals why his decision was so decisive.

In 2011, Range hired TestAmerica to test the water well of two of the eight plaintiffs who initiated the ongoing litigation against Range, Beth and John Voyles. The Voyles subsequently approved the testing. Following collection of samples from the Voyles’ well, TestAmerica then provided incomplete test results to Range via special real-time software that allows partial results to be compiled before comprehensive testing is complete.

Range sent these partial test results — which showed no contamination — to the Pennsylvania Department of Environmental Protection along with explicit notification that they were preliminary and incomplete, as the following email shows: 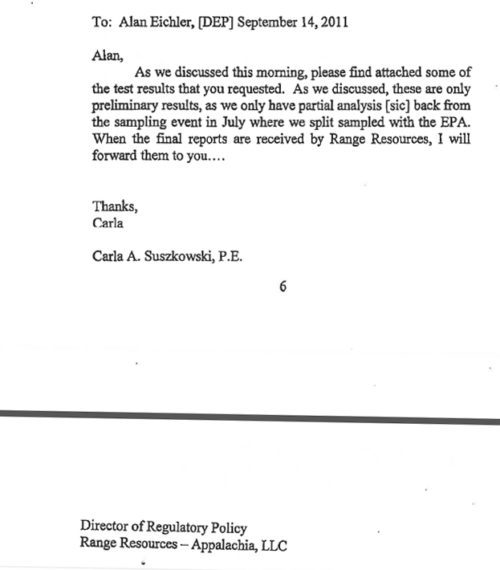 DEP entirely overlooked the fact that the results were incomplete, however, and sent them to the Voyles along with a determination that Range was not responsible for contaminating their well.

Interestingly, despite the fact that the Voyles stated on the record that they believed the test results they received from DEP, they did not resume use of their well, instead continuing to use a private water delivery service, which Judge Nalitz noted in his decision:

“Regardless of the incomplete nature of these results, DEP notified Plaintiffs that there was no evidence of contamination. In response to that information or misinformation, the Voyles family did nothing. They did not begin using the well water.”

“… Beth Volyes said she then believed her water was safe to drink (B. Volyes dep. 428), but the family did not use it and they did not terminate the pending action for a writ of mandamus against DEP…”

Ultimately and most importantly, DEP’s final investigation found that Range was not at fault —meaning that the partial test results that were sent out to the Voyles family, although incomplete, were not inaccurate.

In fact, the Voyles received separate and complete reports on their well, conducted by TestAmerica, for Atlas Energy on the same day they received the partial testing from DEP. These results also found shale development had not contaminated their water.

Judge Nalitz also cited this as evidence that there was no intent by TestAmerica “whatsoever” to mislead DEP. “If results were to be falsified, their falsity would be immediately apparent,” Nalitz stated in the memo, referring to the complete test results conducted for Atlas Energy. He went on to explain:

“Here TestAmerica made no representation to Plaintiffs. It offered partial results to a customer. No one questions the accuracy of those results.”

“The allegation that TestAmerica posted partial results so that Range could thereby deceive a government agency and thereafter gratefully favor TestAmerica with future business is only that, an allegation, with no support whatsoever for the record.”

Despite the EPA’s report finding “hydraulic fracturing activities have not led to widespread, systemic impacts to drinking water resources” and dozens of peer-reviewed studies that come to the same determination, anti-fracking activists continue to insist that fracking can and does contaminate groundwater. But the movement is running out of talking points as each one of their claims — including this Yeager incident — have proven to be without merit.