Energy In Depth has been following the case of a Washington County’s junkyard plaintiff since 2012, when Loren Kiskadden filed a lawsuit claiming that Range Resources operations at a well pad approximately half a mile away, or 2,900 feet, contaminated his water well. This past week the Environmental Hearing Board (EHB) has ruled that the contamination of Kiskadden’s water well was not caused by oil and gas operations.

According to the EHB ruling:

“The Pennsylvania Environmental Hearing Board finds that the Appellant [Loren Kiskadden] has not met his burden of proving by a preponderance of the evidence that his water well was impacted by gas drilling operations conducted by Range Resources” (Pg. 1)

This ruling comes almost four years after the Department of Environmental Protection investigated the complaint by Kiskadden and also determined that Range Resources operations had not impacted Kiskadden’s water supply. A letter to Kiskadden from the DEP lists a number of factors as to why oil and gas operations had not caused the contamination of the water well:

Now, four years later after the original investigation by the DEP, the EHB had similar findings – albeit in more depth – as to why oil and gas operations had not contaminated Kiskadden’s water well.

During the case, the EHB conducted a thorough “finding of facts” on the Kiskadden property in order to start the process of figuring out if gas development was responsible for fowling Kiskadden’s water. According to EHB findings: 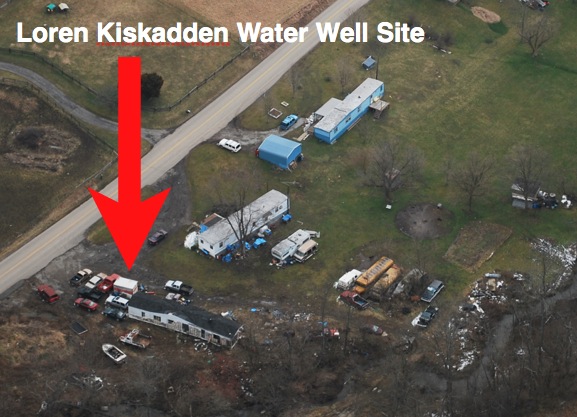 Naturally occurring biogenic methane in private water wells is a common throughout Pennsylvania and something that Energy In Depth has documented before – see here, here and here. From the EHB findings, all experts concluded that the gas in Kiskadden’s water well was biogenic in nature:

“All three parties’ experts agreed that thermogenic gas emanates from a petroleum source. And, all three experts plotted the gas in Mr. Kiskadden’s well as carbon dioxide reduction, and not as thermogenic.” (Pg. 41)

Kiskadden argues that the high levels of sodium present in his well indicate contamination from Range’s operations at the Yeager well pad. However, according to the DEP:

“Gas well waste fluids are high in many parameters, including sodium and [total dissolved solids]. However, they characteristically show the highest concentration in chloride, usually 2-3 times that of sodium. Your water supply shows a chloride concentration of between 33 and 44 mg/l, or about 1/8 of the sodium level. This fact alone largely rules out gas well contamination at your well.” (Pg. 42)

And while the EHB recognizes that high chloride levels are the most important factor determining if gas activities impacted Kiskadden’s water, they do note that it is an important piece of the puzzle. And one that doesn’t fit Kiskadden’s assertions. According to EHB findings:

“A higher concentration of sodium in the soil indicates that the sodium stayed in the soil while the chlorides moved with the fluids through the soil. As such, the Department is correct that one would expect a higher concentration of chlorides in Mr. Kiskadden’s water. As noted earlier, although the level of chlorides cannot be the only factor in determining whether there has been an impact on Mr. Kiskadden’s water from Range’s operations, it is nonetheless an important factor.” (Pg. 44)

Water sampling by the DEP on August 1st 2011 – when Kiskadden first made a complaint – found low concentrations of acetone, t-butyl alcohol and chloroform. According to the DEP and EHB these findings are not uncommon due to Kiskadden’s proximity to the “junkyard.” From the EHB findings:

“The Department’s Mr. Eichler testified that such low concentrations of organic compounds would not be unexpected in private water supplies, especially given the 06/12/2015 49 proximity of Mr. Kiskadden’s property to the auto salvage yard and Banetown Road. The presence of these constituents in his water could reflect background conditions, surface runoff or impact from the adjacent salvage yard. Chloroform, in particular, could be due to Mr. Kiskadden adding bleach to his well after the Department’s testing revealed the presence of coliform bacteria.” (Pg. 49)

Like Kiskadden, other homeowners in the Yeager well vicinity also have pending lawsuits with Range Resources. The Voyle and Haney families were written about extensively in this New York Times hit piece which Energy In Depth previously wrote about here. But what’s interesting about Kiskadden’s testimony is that he tries to use the Voyle and Haney case to strengthen his, but in doing so, he actually punches a very big hole in his own arguments. According to the EHB findings:

So, according to water quality tests, the Voyle and Haney water wells have lower contaminates present in their water wells despite being closer to the Yeager well pad. And while their cases are still pending it does present some holes in their argument, much like Kiskadden’s.

With the facts finally coming to light, after four years and several dubious headlines, the Kiskadden family can now take the proper actions to remediate their water well to ensure no naturally occurring contamination occurs in the future. Range Resources welcomed the determination stating:

“We appreciate the thorough analysis by the Environmental Hearing Board, which upheld the Department of Environmental Protection’s determination that Range’s activities did not cause, contribute or impact Mr. Kiskadden’s water supply. This ruling is the latest in a long series of events including the EPA’s recent report of a multi-year study that we believe should provide the public with confidence drilling can and is being done safely and that regulatory agencies are diligently overseeing the process.”