The Pennsylvania Department of Environmental Protection (DEP) released its annual oil and gas report this week, and it is chock full of great news for the Commonwealth. Not only is production skyrocketing despite a decrease in new shale well permits, the agency is finding fewer violations than in years past, even with conducting more inspections than ever. Both are a testament to the improvements in technology and operations for Pennsylvania’s oil and gas industry. 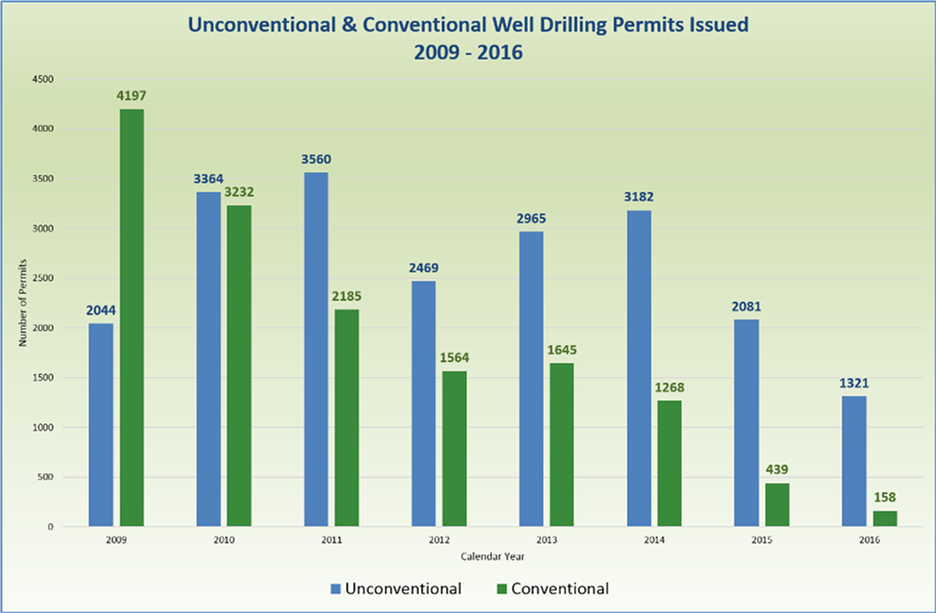 It also showed that Washington and Green counties continue to lead not only the southwestern part of the state, but Pennsylvania as a whole, in new wells, while Susquehanna and Tioga counties saw the most new development in the northeast in 2016. 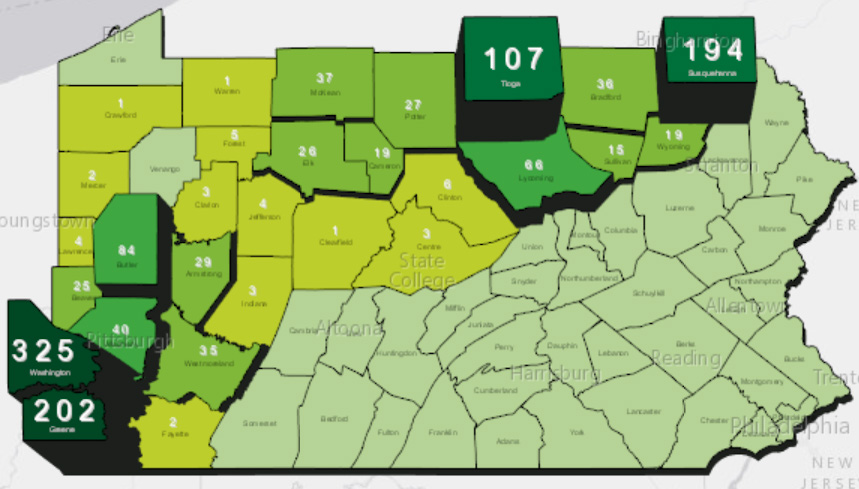 Interestingly, at the same time that new permitting has decreased, overall production continues to break records. In fact, Pennsylvania trails only Texas as the second largest producer of natural gas in the country, producing 5.1 trillion cubic feet (TCF) in 2016. As DEP explained,

“Although the number of new unconventional natural gas wells drilled in Pennsylvania dropped to its lowest level since 2008, natural gas production climbed to its highest level on record in 2016.”

To give some perspective on this, at the height of permitting and new wells in 2011, Pennsylvania produced roughly 1.1 TCF of natural gas, or 378.9 percent less natural gas than 2016. 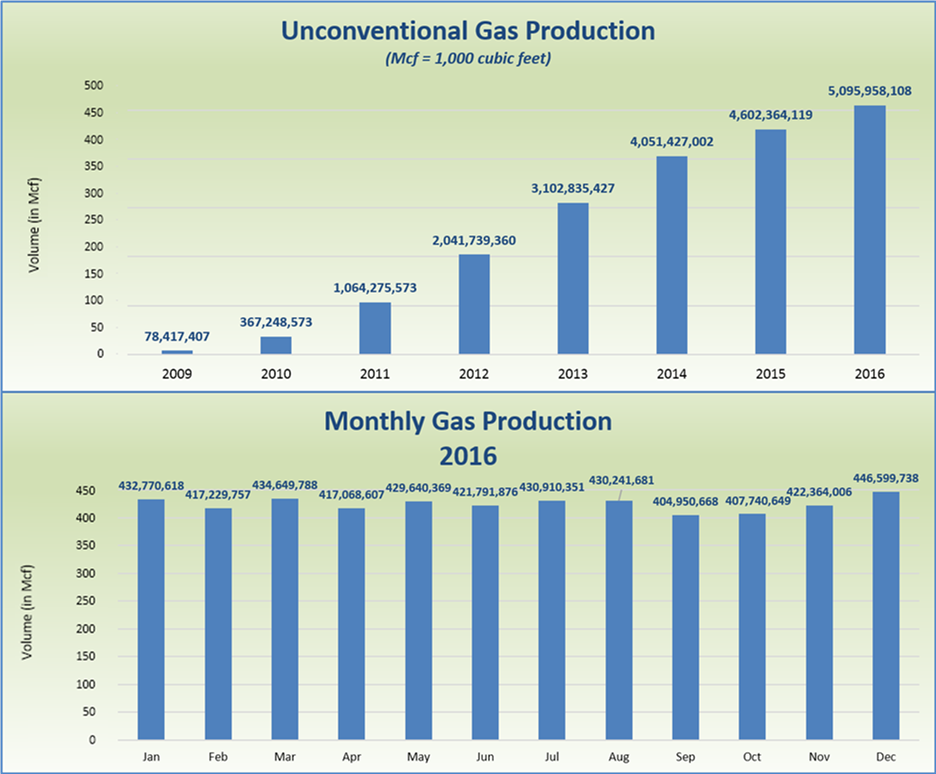 This is occurring for a couple reasons. Not only are well sites becoming more efficient and housing more wells on a single pad to decrease environmental impacts, companies have also continuously extended the length of the laterals of new wells over the last few years. This means that a single well can now produce more gas than ever before.

For instance, according to Upstream Online, Range Resources “has increased its average lateral length from 3,975 feet to 4,915 feet to 6,000 feet in 2013, 2014 and 2015, respectively.” In the company’s recent earnings call this trend was explained further:

“Our team has now drilled the longest Marcellus lateral in Pennsylvania and three of the top four longest laterals in the entire basin. In the first quarter, we drilled three laterals over 15,000 feet and seven laterals over 10,000 feet. We’re achieving a 67% increase in daily lateral footage drilled versus a year ago.

“Combining our drilling performance and planning efforts, our average lateral length drilled this year will be approximately 9,000 feet.”

Another notable takeaway from the report is the fact that the DEP has stepped up its game in terms of well site inspections, conducting over 15,000 unconventional oil and gas well inspections in 2016. The number of inspections has increased by about 190 percent since 2010, and according to DEP:

“Although the number of compliance inspections has increased over the past six years, the number of violations observed has been generally decreasing over this same time period.”

As this latest oil and gas report shows, 2016 was an amazing year for Marcellus production, despite a downturn in overall drilling activity. And this trend has continued into 2017, with U.S. Energy Information Administration (EIA) reporting that, “continued development of the Marcellus and Utica plays in the East is the main driver of growth in total U.S. shale gas production and the main source of total U.S. dry natural gas production.”

In fact, EIA’s most recent Drilling Productivity Report shows the Marcellus is currently up 22 million cubic feet per day (mcf/d) month over month in 2017 when compared to 2016 and has seen rig counts increase as well. 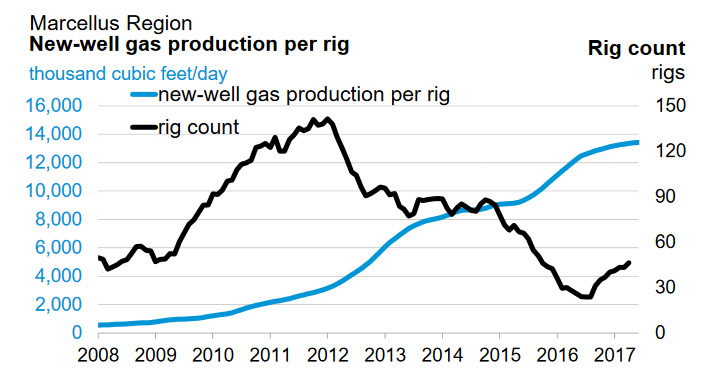 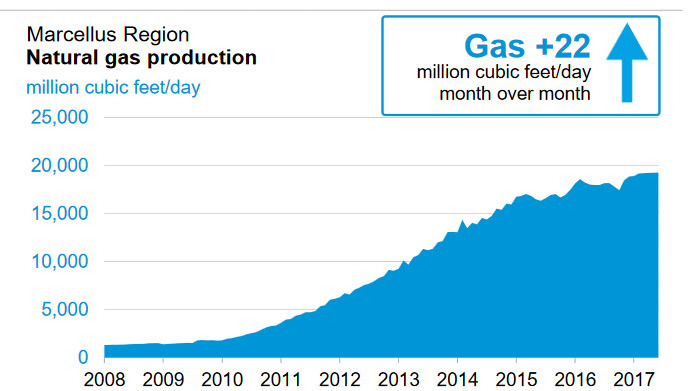 2016 was an awesome year for the Marcellus, and it looks like 2017 is shaping up to be even more spectacular!