Thanks to hydraulic fracturing and skyrocketing natural gas production, Pennsylvania is set to become a new exporter of natural gas in 2015 according to energy analysts at Bentek Energy. The Pittsburgh Post-Gazette reports,

“‘We are anticipating that the Northeast will be a net exporter for the average of 2015,’ said Anne Swedberg, senior energy analyst for Denver-based Bentek Energy. ‘We are already seeing volumes leave the region this summer.’

The rest of the country is expected to catch up later, becoming a net exporter by 2017.”

Becoming a net exporter is a huge milestone that will give Pennsylvania’s economy a major boost. But not all of the Northeast is reaping the benefits of fracking that have made the Marcellus Shale one of the biggest success stories of the last decade. Unfortunately those living in New York’s Southern Tier have been shackled by Governor Cuomo’s ill advised ban on hydraulic fracturing.

Upstate New York residents desperate for economic stimulation recently rallied to become part of Pennsylvania’s Commonwealth or form their own state. Landowners in upstate New York are seeking an opportunity to develop the resources on their land like landowners in Pennsylvania have the opportunity to do. According to Sandra Davis, a Deposit, New York resident:

“We’ll be able to thrive. We’ll see natural gas drilling which will make us independent on our own. We won’t have to count on the state to help us out. We can be thriving on our own little entities.”

Upstate New York is filled with hardworking Americans looking for opportunity. Shale development was and still could be that opportunity if these residents are successful in their endeavors.

According to data from the Energy Information Administration (EIA) the Marcellus Shale produced an astounding 20.4 billion cubic feet of natural gas per day. Those numbers are comparable to Texas outputs, and it’s happening despite low commodity prices and a low rig count, as the following chart shows: 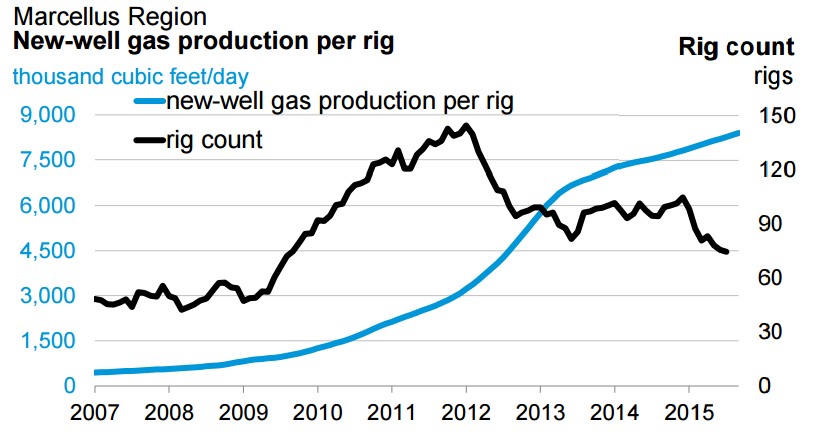 Another reason exporting is now possible in the Northeast is pipelines: new ones coming online, a shift in the flow of natural gas through existing infrastructure, and the expansion of global markets. From the Post-Gazette,

“Now, most Marcellus gas is going to the Midwest, the Southeast and Canada. Eventually it will have access to Mexico through pipelines and globally through liquefied natural gas exports.”

Affordable, clean energy from the Marcellus region will now be transported to new markets through pipelines that historically flowed from west to east. One such pipeline is the Rockies Express Pipeline which began moving natural gas from east to west, this past June.

Moving natural gas produced in the Marcellus region is good news for those looking to take advantage of the vast benefits associated with natural gas end use like cost savings and cleaner energy. For example, Vermont Gas Systems recently announced that customers could see their natural gas bills decrease for the 12th time since January 2012.

But consumer wallets aren’t the only things profiting from this trend; the environment is also benefiting as more people switch to natural gas. According to Vermont Gas:

“By switching to natural gas from heating oil and propane, customers prevent greenhouse gas emissions equivalent to about 6 percent of the emissions from all of Vermont’s cars and light trucks.”

Shale development in the Northeast has meant new opportunity for residents by creating new middle class jobs. According to a study by the Harvard Business School:

“Unconventional gas and oil resources are perhaps the largest single opportunity to improve the trajectory of the U.S. economy, at a time when the prospects for the average American are weaker then we have experienced in generations.”

Continued natural gas production in Pennsylvania is supplying residents throughout the Northeast with affordable and clean energy, all while helping to expand energy intensive manufacturing operations in the region. And, with more pipeline projects coming online in the next couple of years, even more people will have the ability to reap the vast benefits of natural gas end use in their home or business.