Last month, Southwest Pennsylvania’s “Junkyard plaintiff” and his team of lawyers claimed to have discovered new evidence, which they believed warranted the Environmental Hearing Boards (EHB) original decision – a ruling against the plaintiff – to be vacated and reviewed again. After reviewing all the evidence, the Pennsylvania Commonwealth Court declined to reopen Kiskadden’s case, which means the EHB’s original ruling on June 12, 2015 stands. In light of the news, The Observer Reporter ran an article yesterday surmising the years of litigation perfectly. 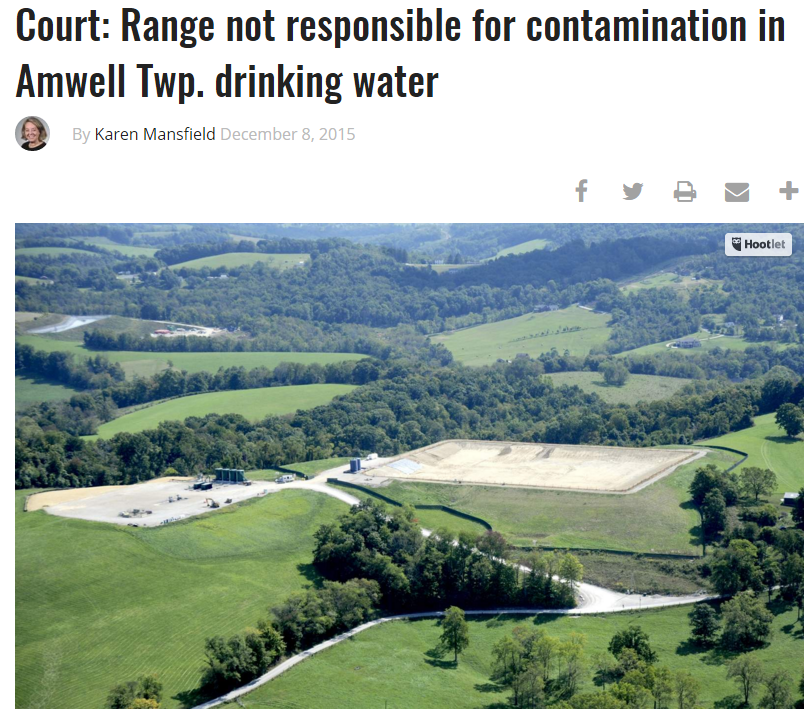 The Pennsylvania Commonwealth Court denied Kiskaddens’ request for a number of reasons, which EID highlighted previously here. But before we get into that, it’s important to note what the court looked for when evaluating the “new” evidence provided by Kiskadden.  According to the Commonwealth Court:

“To succeed on his claim that a remand is warranted to facilitate the Board’s consideration of after-discovered evidence, petitioner is required to demonstrate that discovery of the evidence occurred after trial, that the evidence could not have been obtained at or before trial by reasonable diligence, that the evidence is not cumulative or merely in the nature of an impeachment of credibility, and that the evidence would compel a different result.” (emphasis added pg. 2)

“Petitioner further alleges that, subsequent to the April 2015 deposition, he began to inquire about the use of tracers during another deposition taken June 11-12, 2015. Application to Vacate and Remand. Petitioner offers no explanation for the delay in exercising “reasonable diligence” after learning of the tracers in April 2015 and prior to the Board’s June 2015 decision.” (emphasis added pg. 3)

Kiskadden and his team also tried to use the “new” evidence as a way to establish a hydrogeological link between the Range Resources well and Kiskaddens’ poorly maintained water well. But the Commonwealth Court stated:

“As we understand the Board’s rebuttable presumption, it did not relieve petitioner of the burden to show how the water from the Yeager Impoundment reached petitioner’s water supply. Petitioner’s expert failed to persuade the Board as to a hydrogeological connection between the Impoundment and his water supply; in this regard, the Board was of the view that petitioner’s expert’s testimony was conclusory, difficult to follow, and often based on the statements of others rather than his own opinion. The Board then reviewed the expert’s theories of a hydrogeological connection and found his theories less persuasive than the credible testimony of Range Resources’ expert.” (emphasis added pg. 4)

And, when it comes to the letter from the U.S. Agency for Toxic Substances and Disease Registry (ATSDR) the Commonwealth Court stated:

“Finally, the U.S. Agency for Toxic Substances and Disease Registry’s 2013 draft letter and 2015 final letter do not support petitioner’s position that a remand is warranted. Without regard to any admissibility issues, neither document attempts to identify the source of the constituents found in petitioner’s water supply.” (emphasis added pg. 4)

Lastly, and arguably the most important piece of the judge’s ruling, is that even if the “new” evidence was accepted, it wouldn’t have had any bearing on the EHB’s decision. According to the Commonwealth Court:

“In light of the rebuttable presumption and the Board’s reasons for discounting petitioner’s expert’s testimony on the issue of a hydrogeological connection, we cannot conclude that the Board would most likely reverse its determination on remand if it credited petitioner’s additional evidence.” (emphasis added pg. 4)

It’s clear now that Kiskadden and his team of lawyers used this “new” evidence as a way to bring this back into the media spotlight. Unfortunately, some media outlets took the bait.  Hopefully this ruling by the Pennsylvania Commonwealth Court, which backs findings by the Environmental Hearing Board and the Department of Environmental Protection, can put this matter to rest and Kiskadden can work to get his water well fixed and properly maintained.