A feature by the London Daily Telegraph reported showing the opinions of residents of southwestern Pennsylvania in regards to Marcellus Shale development. Unfortunately, the folks quoted in the Telegraph story didn’t provide a very accurate picture of that support, instead providing an uncritical platform to highlight the views of a vocal – though increasingly small – minority.

Last week, the (London) Daily Telegraph published a feature with the headline “Now for the downside of fracking.” The article profiled the viewpoints and activities of well-known anti-shale activist David Headley, the same guy The New York Times (NYT) featured in a major write-up in its paper last summer.

Of course, as NYT story makes clear, Mr. Headley’s main concern isn’t really related to the development of natural gas from shale, or even with the utilization of hydraulic fracturing toward that end. The problem, it turns out, is over money: Mr. Headley sold away his mineral rights when he bought the property in 2006, and he thinks he should have been paid more for the pipeline right-of-way agreement he signed. Unhappy about how he’s been compensated on that, Headley has filed a steady stream of complaints over the years that, according to Headley himself, would have been resolved if only he “had received more money.”

Those complaints reached a boiling point recently when the Pennsylvania State Police were forced to issue a restraining order against Headley after he “patrolled” his land with a shotgun as workers attempted to install the pipeline for which he had previously signed a right-of-way. Unfortunately, not a whole lot of this history made its way into the Telegraph piece. Below, we take a look at a few other claims that don’t quite stack up with the facts:

Telegraph: “Every morning, when he opens his bedroom curtains, the first thing that David Headley sees is a gas well. It sits less than 200 yards from his front door and it is a constant reminder of what Mr Headley says is the ‘pure hell’ of living with fracking.”

FACT: Developing a natural gas well, which includes the three-day-long process of fracturing the well, generally takes several weeks at most to complete. Landowners are kept informed throughout the process and often work with operators to ensure disturbances are kept at an absolute minimum.

Headley’s suggestion that companies care little about the landowners whose resources they are developing, and that the landscape is somehow left irrevocably scarred, is contradicted by the facts. Need proof? Last week, our team took a field trip to Smithfield, Pa. – same town Mr. Headley calls home. We snapped a few pictures of some completed wellsites. We’ll let you decide whether these are images of “pure hell,” as Mr. Headley suggests. 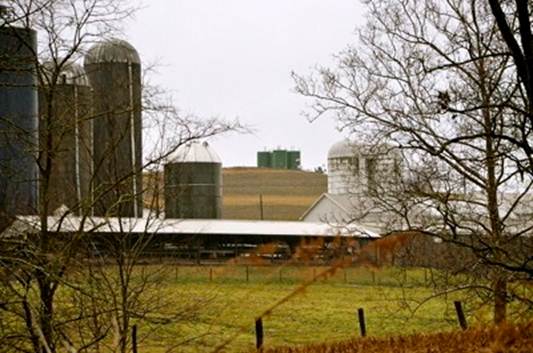 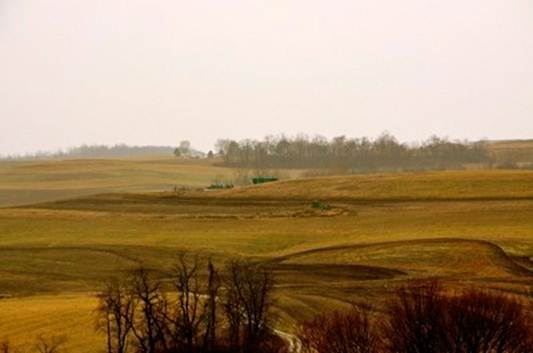 Telegraph: “In Pennsylvania, some [natural gas wells] are tucked behind hedgerows and hidden away in copses and hollows, but many others – along with compressor stations and open “impoundment ponds” used to store toxic fracking solution – are situated within a few hundred yards of residential housing.”

FACT: The apparent suggestion here that the mere existence of natural gas wellsites in a community constitute living in an industrial wasteland is simply not true. As the pictures above show clearly, natural gas development co-exists just fine with the farms and landscapes of Smithfield, Pa. Further, impoundment ponds are a temporary part of development, and in fact most operators no longer even use them.  Where they are still used they are often “offered” to landowners in the form of Surface Use Agreements or otherwise titled contract documents, to which the resident can, but does not have to, agree.

Much more important, these ponds are quickly being replaced by closed-loop systems throughout the Marcellus region and other areas where these resources are being responsibly developed.  These systems separate waste materials, including flowback and produced fluids, at the point of extraction and are channeled to sealed containment systems. In fact, they are so effective, they’ve even gained some support among anti-energy groups – such as Earthworks, which stated they “isolate waste products from the environment” and “can greatly reduce or eliminate the discharge of toxic drilling wastes on site.”

Telegraph: “Mr Headley points to the well-head, which is submerged under a foot of murky rainwater that is bubbling gently, like a witch’s brew. ‘See. You can see the thing is leaking,’ says the former car body-shop owner, who bought his farm in 2006 but chose not to purchase the gas rights – a move he now bitterly regrets. ‘What’s really coming out of that well?’ he asks. ‘Is it safe? We just don’t know.’”

FACT: Unfortunately, we weren’t able to gain access to Headley’s property on our field trip earlier this week, and we weren’t about to try given his previous record with shotguns.  Of course, in truth, we didn’t really even need to visit to get to the bottom of this one. That’s because, according to the Pa. Department of Environmental Protection (DEP), Headley’s characterization isn’t true.  When contacted about Headley’s comments and the Telegraph’s story, DEP offered the following to us:

“As of our most recent compliance inspection, all issues … where the Headleys complained have been resolved. Also, this [Telgraph] reporter never contacted us. Had he, I would have been happy to point out our many, many interactions with the Headleys and their concerns.”

Telegraph: “Whether Mr. Headley’s fears are real or imagined, he is far from alone in holding them. One pressure group, the Pennsylvania Alliance for Clean Water and Air, has collated more than 800 cases of people they say have been harmed by fracking nationwide – a body of evidence that environmentalists and local politicians contend is now beyond anecdotal.”

FACT: Here a list of similar claims is offered to “strengthen” Headley’s accusations. However,  the group that compiled the list makes no effort to hide its motive of ending natural gas production in Pennsylvania.  In fact, the very first item on their website is a “Case for a Moratorium on Drilling in the Marcellus Shale,” and the organization goes on to list a number of projects and entities supported by the Park Foundation – an organization financing nearly every anti-shale initiative to date – as resources to learn more about the “dangers” of hydraulic fracturing.

Regardless of the bias of this organization, the more compelling fact is that most of the claims collected by this group have been proven false.  A few examples:

Telegraph: “Unlike in the UK, public fears do not focus on earthquake risk, which caused the British government to put a moratorium on fracking until last year, but on environmental pollution issues. They include contamination of drinking water with methane, air pollution from the gas wells and compressor stations, and possible radiation poisoning from elements such as uranium, thorium, and radium that occur naturally in the vast Marcellus Shale gas deposit that stretches for hundreds of miles from West Virginia to upstate New York.”

FACT: According to the Pennsylvania DEP, notwithstanding that over 6,000 Marcellus wells having been developed in the state, there are no emissions from these activities that even come close to reaching levels harmful to human health. As this DEP report highlights:

“Results of the limited ambient air sampling initiative in the northeast region did not identify concentrations of any compound that would likely trigger air related health issues associated with Marcellus Shale drilling activities.”

As for claims of water pollution and the safety of hydraulic fracturing process, both the former and current secretaries of the DEP (one Democrat, one Republican) have testified there is “not one” single case of water contamination in the state as a result of hydraulic fracturing. That’s quite a record, especially when you consider the thousands of wells that have been safely completed in Pennsylvania.

“Additional water testing over the last year also appears to have put to rest concerns that radioactivity from the drilling waste could contaminate drinking water…States said his agency [Pittsburgh Water and Sewer Authority] ‘looked real hard’ at the radioactivity issue, but didn’t find a problem in western Pennsylvania rivers…Sunday, the DEP spokesman, said the state’s water quality monitoring network shows normal, background levels of radioactivity. ‘Monitoring at the public water supply intakes across the state showed non-detectable levels of radiation.”

Telegraph: “As New York and Colorado debate whether to allow fracking, environmental groups and some residents in Pennsylvania argue that the long-term health impacts so close to residential communities are just too indeterminate to be considered safe, saying that two official studies on the impact of fracking on water quality and radiation build-up are not even due to be completed until 2014.”

FACT: While New York is still finalizing regulations governing shale development (after four long years), Colorado is not debating whether or not to “allow” hydraulic fracturing.  In fact, the state is the sixth largest natural gas producing state in the nation, and according to the Colorado Oil and Gas Association, 11,568 oil and natural gas wells were developed between 2007 and 2011, with 90 percent of those undergoing hydraulic fracturing. Even Colorado’s governor, John Hickenlooper (D), has defended the safety record of hydraulic fracturing in his state.

Telegraph: “A study of air emissions from natural gas drilling in Pennsylvania, just released by the RAND Corporation think tank, illustrated the gap between those macro- and micro‑level experiences. It found that while the total emissions were less than that of a single coal‑fired power plant, in areas where drilling was concentrated the emissions were “20 to 40 times higher” than regulations permitted for a single minor source.”

FACT: According to that same report, emissions from oil and gas development account for less than one percent of emissions statewide. Also important: increased natural gas use has actually lowered emissions in the state, including in counties where shale development is taking place.

Using minor sources to justify the argument is a bit misleading. Stating “emissions were 20 to 40 times higher than permitted for a single minor source” tells us nothing unless we know the geographic area involved and how the emissions from a single minor source compare to air quality standards for the area.  Any geographic area would be expected to include several minor sources (e.g., dry cleaners, compressors, etc.).  Yet, this doesn’t mean air quality is in any way threatened.  Indeed, the Pennsylvania DEP explicitly says it is not, which is really the only point that matters.

Telegraph: “And that, concludes Jesse White, a Pennsylvania state representative who has taken up the cause of those who say they have been affected by the shale gas boom, is the lesson that Britain should learn if and when it moves ahead to exploit shale gas reserves that – while unlikely to alleviate the short-term crunch warned of this week by Ofgem – could ultimately exceed those of the North Sea.”

FACT: Jesse White is far from an unbiased state representative who has simply “taken up the cause” of those “affected by the shale gas boom.” In fact, Jesse White previously supported Marcellus Shale development – before Range Resources declined to provide him political favors to attend the Super Bowl, according to the Pittsburgh Times-Tribune.  Since that dispute, White has attacked DEP and the natural gas industry on behalf of individuals who don’t even reside in his district.  Here again, the full story provides a much different picture than his comments to the Telegraph suggested.

People in Southwestern Pennsylvania, of course, are already well aware of this overwhelming support and the benefits Marcellus development is bringing to their communities.  Unfortunately, the folks quoted in the Telegraph story didn’t provide a very accurate picture of that support, instead providing an uncritical platform to highlight the views of a vocal – though increasingly small – minority.