The Army Corp of Engineers’ announcement that it will issue the final permit to complete the Dakota Access Pipeline generated a lot of headlines this week, but it is just one of a handful of positive developments on the pipeline front so far this month, with three Marcellus and Utica shale projects being of particular note.

The Federal Energy Regulatory Commission (FERC) approved two important pipelines last week — the Atlantic Sunrise and the Rover — that will deliver Marcellus and Utica gas to markets across the country.  A third pipeline slated to carry Marcellus and Utica gas, the Atlantic Coast, also moved a step closer to approval recently with FERC releasing its draft environmental assessment for the project in January.

As EID has discussed previously, there is a growing need for infrastructure to move gas developed in the Marcellus and Utica plays of Pennsylvania, West Virginia and Ohio to consumers within those states and beyond. It’s a need that is both understood and supported by voters in Pennsylvania, Ohio and Virginia, as a recent National Association of Manufacturers (NAM) poll showed:

Despite the findings of the NAM poll, each of these projects have been met with opposition from a small but vocal minority, led by groups like the Sierra Club, that are eager to keep all natural gas in the ground by any means necessary, including making false claims.

Let’s take a look at some of the economic benefits these projects could bring to the regions along the pipelines’ routes:

Atlantic Sunrise is a 180-mile, $3 billion expansion of the existing Transco system that will add 1.7 billion cubic feet (Bcf) of natural  gas per day to the system — or enough gas to power more than seven million American homes daily.

This line will cross 10 counties to bring consumers in Southeastern Pennsylvania readily available Marcellus gas from the northeastern part of the state.  It will also supply gas as far south as Alabama and to the Cove Point LNG facility in Maryland. In other words, it will not only make Marcellus gas more readily available to Pennsylvanians, but also to Americans as a whole and even other parts of the world. 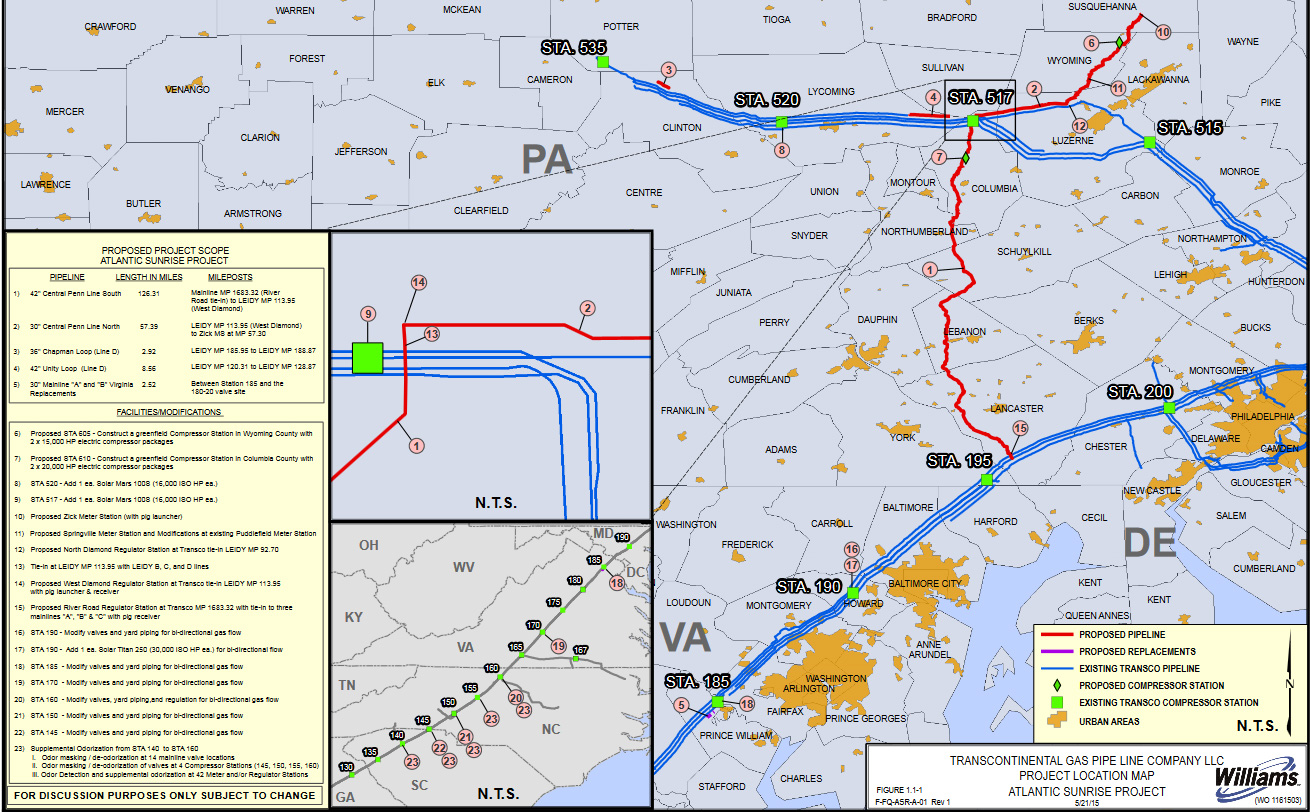 This pipeline will have enormous economic benefits for the regions along its route, according to a 2015 Penn State University study: 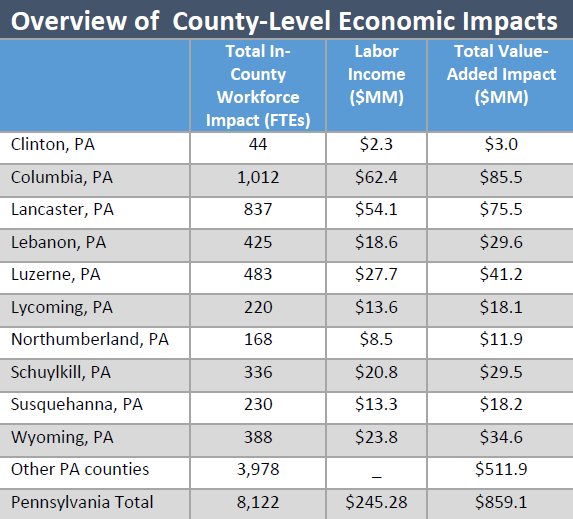 In addition to the above benefits, the project is expected to create 29 new and permanent full-time equivalent positions and $1.9 million in added value in the operating areas of the pipeline once it is up and running.

Atlantic Sunrise now has all of the approvals necessary from FERC to begin construction; however, the project is still awaiting permit approvals from Gov. Tom Wolf in Pennsylvania — a state where 87 percent of Pennsylvania’s voters support adding more energy infrastructure.

The Rover is a new natural gas pipeline that will transport 3.25 Bcf of natural gas daily approximately 713 miles. It will have three points of origination — one in southwestern Pennsylvania, one in western West Virginia, and one in southeastern Ohio — that will meet at an interconnect in Defiance, Ohio, and eventually end in Livingston County, Michigan. 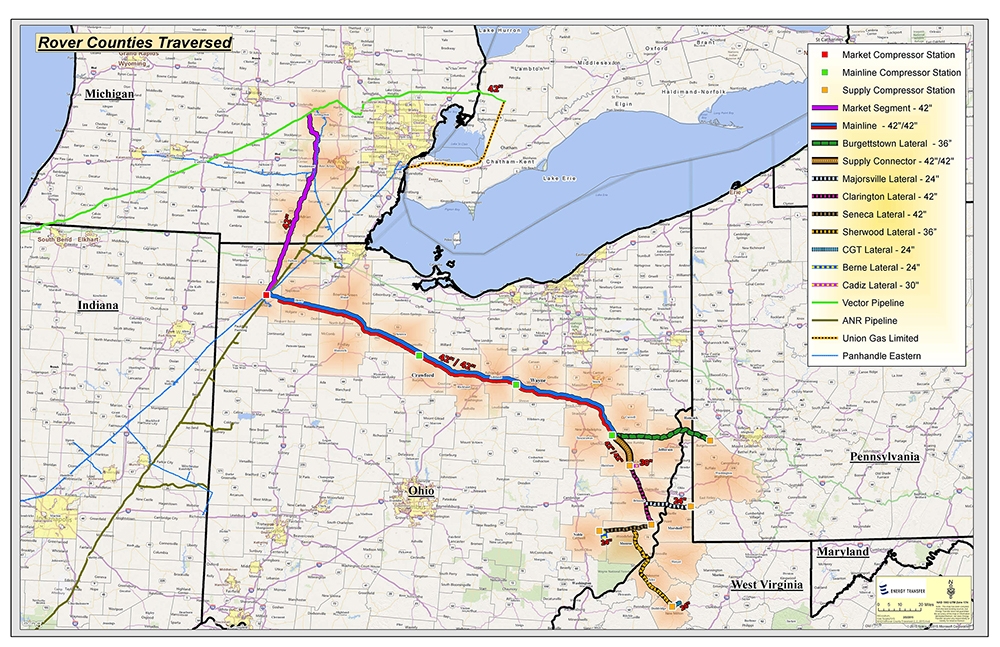 Once complete, Rover will deliver Marcellus and Utica gas not only to consumers in Pennsylvania, West Virginia, Ohio and Michigan, but also other markets across the U.S. and Canada.

This pipeline could have tremendous economic benefits for these four states, with total investments of approximately $4.2 billion:

The Rover is scheduled to be built this year, according to Detroit News:

“Energy Transfer spokeswoman Vicki Granado said the company is on schedule to complete its pipeline this year.

“’Currently, we have said that we anticipate we will meet the targeted in-service goals of July 2017 for Phase I and November 2017 for Phase II,’ she wrote in an email.”

The Atlantic Coast Pipeline will run 600 miles from Harrison County, West Virginia, through Virginia and into North Caroline, supplying about 1.5 Bcf per day of Marcellus and Utica gas to consumers in Virginia and North Carolina. 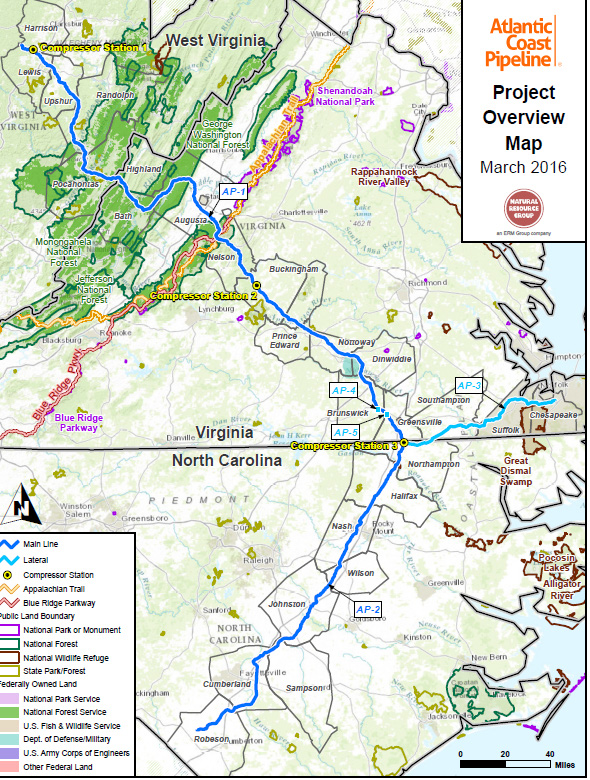 Like other pipelines, this project could bring incredible economic impacts to the three states it will run through if approved. It will support 17,240 jobs during construction and 2,200 operation jobs. It is also estimated that the gas brought through the Atlantic Coast will save consumers in Virginia and North Carolina an estimated $377 million annually.

Additionally, a 2015 report found that county and municipal property taxes paid by the proposed pipeline would be in excess of $30 million annually. Chmura Economics & Analytics also issued a report that found the pipeline would generate an average of $456.3 million yearly into the economy of the three-state combined region.

The project is currently in the comment period for the draft Environmental Impact Statement issued by FERC in January, and is still awaiting permits. Union groups like LiUNA have expressed their support of the project, and 89 percent of Virginia’s voters — where nearly two-thirds of the landowners along the pipeline’s route reside — believe that new infrastructure will have a positive impact in the state. If approved by FERC, the pipeline could go into construction in late 2018.

The approval and progress made by FERC toward these pipelines is monumental and is a step in the right direction to get Marcellus and Utica gas into markets across the country and the world.

But at the same time, several pipelines that have faced opposition from a vocal minority are still awaiting FERC approval, with the Penn East Pipeline being a prime example. Additionally, pipelines like the Constitution and Atlantic Sunrise are being held up at the state level despite having all the necessary federal permits to begin construction and the growing need for more natural gas that those lines could supply.

So although February has thus far been a month of considerable pipeline progress, challenges remain in developing the infrastructure needed to deliver the American people shale gas that has resulted in energy costs falling to all-time lows.