“In this time of economic uncertainty, Millennial and Gen Z voters have made it clear: America’s plan to address climate change must include an affordable energy solution like natural gas.”

The poll follows a recent report showing the United States is continuing its long-term trend of reducing carbon emissions, thanks, in large part, to the increased use of natural gas in the country.

Natural gas can play a key role in all of these top issues by providing a reliable, affordable energy source, creating jobs and decreasing emissions. This is something that was recognized by respondents, as the results showed young voters are more likely to favor natural gas when told about the clear benefits it provides. 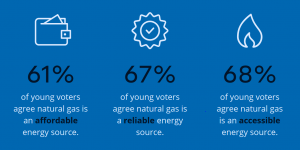 Nearly three-fourths of voters were more favorable towards natural gas when told about the savings it provides to U.S. households every year. 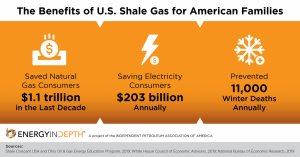 And more than 70 percent of voters were more favorable when they heard about the impact natural gas is making to lower the country’s greenhouse gas emissions. 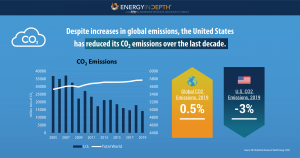 As natural gas continues to become a larger part of the world’s energy mix, the benefits extend far beyond the United States. According to the 2020 Statistical Review of World Energy the United States was one of two countries driving global demand for natural gas, with U.S. demand increasing 3.3 percent. The global share of natural gas in the primary energy matrix rose to a record high of 24.2 percent.

The United States continues to be a leader in production, with U.S. natural gas production representing almost two-thirds of the global production increase in 2019. This increase in demand and production coincided with a decrease in U.S. carbon emissions. According to BP’s report, in 2019 the United States reduced its CO2 emissions by 3 percent – the most significant in North America, continuing this decade’s steady decrease.

As the demand for natural gas increases across the country, domestically produced natural gas will be one answer to the issues most important to young people. Both the economic and environmental benefits of natural gas will be crucial to the nation’s future. This new poll shows that the great benefits natural gas has provided to the United States are being noticed by all Americans, no matter their age.