Power Plant President: “We Are Here In Ohio Because of Shale Development”

There is a tremendous change afoot in Ohio when it comes to fuel sources for electricity. As EID recently reported, investors are racing to Ohio to build combined cycle gas-turbine power plants as a result of the loss of 10,000 MW of coal-fired power, cheap and abundant natural gas from fracking, and a competitive free market system. A total of 11 Ohio natural gas power plants are either in development or under construction, adding over 6,000 jobs, $9.5 billion in direct investment, and more than  enough power to surpass the coal-fired power loss the Buckeye State has experienced. Ohio communities are welcoming these plants with open arms, as was demonstrated this week when Boston-based Clean Energy Future received the Youngstown Chamber’s prestigious “Spirit of the Valley” award during their annual meeting,  in recognition for their multi-billion investment made in the community. As the president of the company, Bill Siderewicz accepted the award, he told the audience,

“If Ohio, West Virginia, and Pennsylvania were its own country, it would be the third largest producer of natural gas in the developed world. That fact was not lost on us. We are here in Ohio because of shale development.”

Local leaders who attended the Youngstown-Regional annual meeting are over-the-moon about these two plants and the fact that they will soon add $2 million in annual payroll in northeast Ohio.  But the entire state should be just as excited about these gas-fired plants. Not only are they creating much-needed jobs, they are also providing residents statewide with the lowest prices for electricity. To highlight this point, Siderewicz went on to say,

“Since 2010, the United States has become an exporter of energy instead of an importer. The United States consumes 40 percent of all natural gas produced in the world, and the Clean Energy plants in Lordstown will allow the Valley to enjoy the lowest-cost electricity, not just in Ohio or the United States, but the world.”

One primary reason electricity customers have and will continue to enjoy low-cost electricity is due to the free market system, where all fuel sources of electricity compete for market share. The Ohio State University recently produced a study which found that Ohio electricity consumers would save $3 billion a year going forward, thanks in large part to the influx of new natural gas-fired power plants, as the following graphic illustrates. 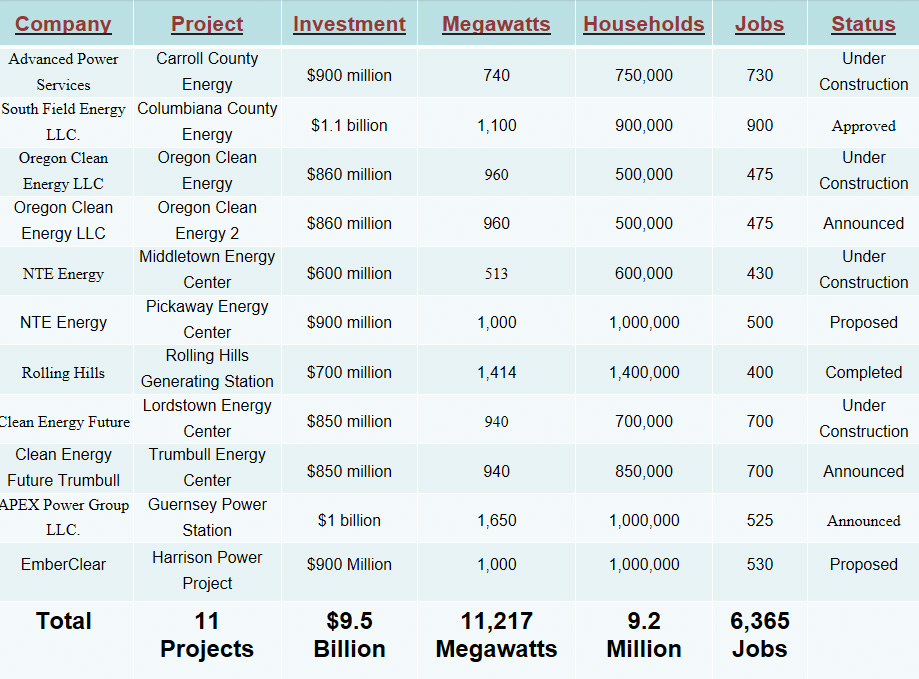