For those who may not be familiar with the term, “wet gas” includes ethane, propane, butane, iso-butane and natural gasoline, which is separated at processing plants and is then used to make numerous everyday petrochemical products.

Specifically, the DOE report brings to focus larger projections for ethane production from the Marcellus and Utica shale plays than had been previously estimated, as well as updates on infrastructure developments in the Appalachian region, and “research and development opportunities related to natural gas and NGLs production, conversion, and storage.” 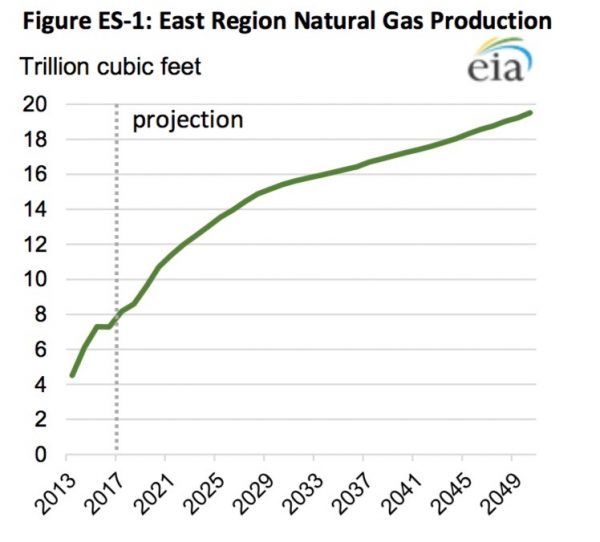 Much attention has been given to the natural gas liquids production coming out of the Appalachian Basin, and with NGL production in Appalachia projected to increase more than sevenfold, there is cause for enthusiasm for the opportunities these resources bring to the region. The report states: 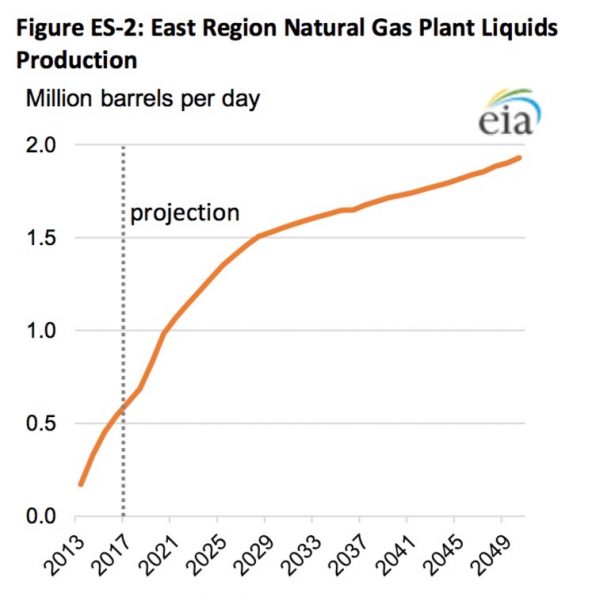 As EID covered before, the Appalachian Basin is driving national NGL production records, and it’s these natural gas liquids that have the potential to attract new investments and industries to the region. The DOE report notes that “leaders across the Appalachian region have identified the potential economic opportunity presented by these significant NGL resources,” and one of the key objectives of the agency in updating the report was to “contribute to the dialogue” of efforts underway to capitalize on these opportunities.

These leaders include the governors of the tri-state area – Ohio, Pennsylvania, and West Virginia – who renewed their Memorandum of Understanding (MOU) to “continue efforts to maximize growth in the shale gas region” earlier this spring.

Likewise, Shale Crescent USA, an economic development initiative looking to encourage business growth in region, has been proactively engaged with industry leaders and stakeholders to draw attention to the great advantages the region has to offer thanks to its natural resources.

This is no small undertaking, but the DOE’s findings, coupled with a recent IHS Markit study, “The Potential Economic Benefits of an Appalachian Petrochemical Industry,” has Shale Crescent preparing Appalachia – or the “Shale Crescent” region – to realize its potential to bring about a third “industrial revolution.”

As energy expert David Blackmon notes in his most recent Forbes piece, the IHS study projections for the Appalachian Basin underscores the significance of the play, drawing comparisons to the juggernaut Permian Basin:

“The IHS Markit report also projects that, if the Marcellus region were a country, it would currently rank third globally in natural gas production, behind only the rest of the U.S. and Russia.

“So yes, there is indeed a big oil boom taking place in the Permian Basin, but it is far from the only petroleum-based energy boom driving the U.S. economy today.  The Shale Crescent of the Northeast is enjoying a big boom of its own, and it’s only going to get bigger in the years to come.”

The EIA data and DOE recommendations highlighted in the report reinforce the IHS findings, showing the Appalachian Basin to be the most profitable – and attractive – place to build a petrochemical plant in the country. Indeed, the opportunity (and feasibility) to build out what would serve as “second center of U.S. petrochemical and plastic resin manufacturing, similar to the Gulf Coast,” is something the Department of Energy has been eyeing for some time, as noted by Energy Secretary Rick Perry in his testimony before Congress this spring:

In order to realize the potential to build out the petrochemical and plastics manufacturing industries, the DOE report notes the increase in the needed infrastructure and also identifies the need for continued investment in infrastructure expansion:

“Industry has made significant investments in natural gas and NGL infrastructure to support the boom in production in Appalachia this decade. New investments to take advantage of the NGL resources in the region have been identified by industry, and forecasts for production over the decades to come highlight the opportunity for additional investments across the NGL supply chain.” 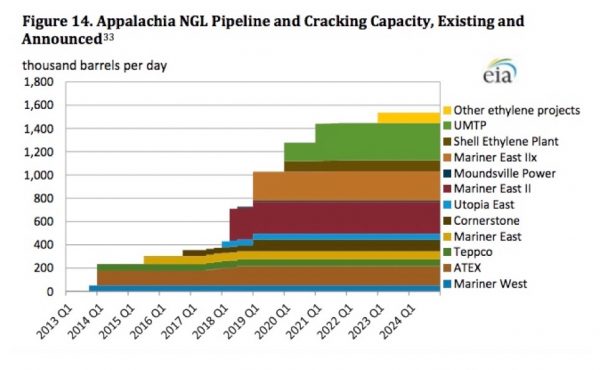 Right now, there are more than $23 billion worth of pipelines planned across the three states. In addition, as covered previously by EID, there have been a number of new processing plant projects coming online over the past few years.

For example, MarkWest has invested billions of dollars on processing plants in Ohio alone, which include:

Likewise, there are a number of proposed cracker plants in various stages of development, including the Shell ethane cracker in western Pennsylvania and the proposed PTT Global Chemical ethane cracker project in Ohio.

These plants are vital to the effort, as the facilities break down ethane into ethylene – the building block of petrochemicals – and convert it into derivatives – like polyethylene – that are key to ensuring Appalachia’s bright plastics and petrochemical future comes to full fruition.

There is no question the “ongoing renaissance in oil and natural gas production” has led to incredible benefits for the Appalachian region*. The safe, responsible development of the region’s geological gifts has brought manufacturing back, and answered some prayers by returning the steel industry to its natural habitat. It’s also bringing jobs, increasing tax revenues for the states, savings for energy consumers, and even improving our air quality.

The Rust Belt, No More, Appalachia has a bright future ahead, and this new DOE report goes a long way to showcase its great potential.

*Not available in NY