Earlier this week roughly 100 people turned out for what activists were calling a major rally to stop natural gas development in Pennsylvania’s state forests.  ABC27 out of Harrisburg reported the number of attendees to be in the hundreds, which by the looks of the picture below is not reflective of the actual number of participants. The Delaware Riverkeeper went as far as to inflate the numbers to “over 400” that “fill[ed] the Rotunda.” 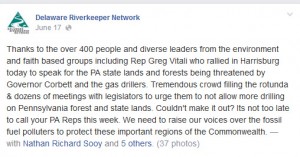 However, this picture by Energy In Depth shows those estimates weren’t even close. 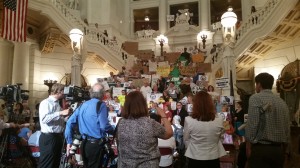 As you can see from the photo, activists did fill the Rotunda steps, but other than a few people who came in after the rally began, there wasn’t a huge crowd blocking the walkways through the front doors of the Capital building and there certainly weren’t 400 people in the room.

Despite comments during the rally by Representative Vitali, who has been outspoken critic of developing state forests, that, “We have the majority of people,” this turnout was a huge contrast to the rally in May that brought out thousands in support of shale development through out the state. Capital police estimated the turnout at that rally to be somewhere around 3000 and called it the biggest gathering in Harrisburg in years.

Just take a look at these pictures. The first is the view outside of the capital building at Tuesday’s rally, and the second is May 6th at the Pennsylvania Jobs and Energy Rally. 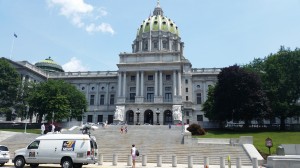 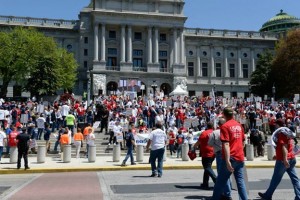 So why such a major difference in turnout? Well that’s an easy answer.

The Energy Rally in support of shale development brought out union leaders, community leaders and residents who have either seen the real benefits natural gas development has had in their communities or acknowledge the tremendous opportunities it continues to provide our state. Take a look at the Marcellus Shale Coalition’s recap of the day to find out why people participated:

The activists earlier this week were rallying against state forest development as if it just started in Pennsylvania with Governor Corbett’s decision to lift the moratorium on new leasing of state forests that had been in place since 2010. This isn’t anything new for Pennsylvania.

State forest development has been managed by Pennsylvania Department of Conservation and Natural Resources since 1947, and in a recent report from DCNR, Secretary Ellen Ferretti, said, “The breadth and depth of this report demonstrates that shale gas production on state forests is being carefully managed.”

On top of the carefully managed program already in place, the economic benefits are tremendous. Pennsylvania received over $153 million from leasing and royalties from the oil and gas industry alone from 1947 to 2008.  Since 2008, Marcellus Shale development on state land continues to be a huge revenue generator for Pennsylvania.  According to DCNR:

“Approximately 429 wells have been drilled and are capable of producing natural gas. They have generated approximately $285 million in royalty revenue since 2008.”

New leasing is expected to bring in an additional $75 million to help balance the state budget and the royalties generated will be used for improvements in the state forests.

What’s more—all of this is possible without ever putting a single well pad on state forest land that has not already been leased. The governor’s executive order will allow for new leasing, but these will be non-surface agreements, meaning natural gas may be pulled from land under the state forest, but pads will be placed on adjacent land. This will keep disturbance to the state forests and the activities that take place to a minimum.

Governor Corbett’s decision will help continue to generate jobs and revenue for Pennsylvanians as the natural gas industry has been doing for nearly 10 years in the state. When you really think about it, it’s no surprise Pennsylvanians turn out in such high numbers to show support for something that has been this beneficial to our communities, while activist rallies have fizzled out.