A town hall meeting on climate change held by two Colorado Democratic state senators descended into chaos this weekend before ending with anti-fossil fuel activists unrelentingly shouting down an attendee who attempted to speak on behalf of industry.

Senators Angela Williams and Lois Court organized the meeting to inform citizens about various bills pertaining to climate issues under consideration during this legislative session.  Both Williams and Court represent districts in and around Northeast Denver.

Colorado Rising, the group behind 2018 ballot measure Proposition 112 which would have drastically increased setbacks and put most of Colorado off limits to oil and gas operations, promoted the event on its social media pages and encouraged attendees to “call on Williams and Court to take real action on behalf of our communities and planet.”  Dozens of activists showed up to the standing-room-only event with neon signs and called for a halt on permitting.

Protesters remained calm as Conservation Colorado gave an overview about global warming and Court and Williams went through the names of several climate-related bills.

The trouble started when Court talked about the uncontroversial importance of balance in the legislature and taking into account more than one perspective when making a decision.  She then asked the audience how many people drove to attend the meeting.  When most of the room raised their hands, she said, “well we’re all guilty.”  That’s when the groans and shouting immediately started.

“It’s not individuals it’s the corporations.”

Then Court asked how many people in the audience turned on their furnaces in the winter.

“Are these questions or rhetoric?”

Court responded that the questions would come later.

Then several activists started yelling about how it was unfair to ask questions and then “shut people down.”

Court, an educator, compared the room to an unruly group of her students.

The tension in the room was then well-established. The senators had to set ground rules for participants to maintain decorum or they would have to shut the meeting down.  They mentioned that the point of the meeting was to get feedback about solutions so the legislators could take that information back to the Capitol with them.

But heckling continued throughout the “question and answer” session, most of those called-on used their time to accuse the lawmakers of not acting fast enough on climate issues.  Representatives of the Sierra Club, Earth Guardians, and 350.org and Food and Water Watch all offered comment.

Others called the two senators too cozy with the oil and gas industry, even though Court pointed out that she had never received any donations from industry affiliated PACs.  They also called for a pause in new permits, the closing of fossil fuel electric plants, to keep fossil fuels “in the ground,” an expansion of local control and an adoption of policy similar to the stance of the Martinez plaintiffs on health and safety.  They also showed little understanding of the gravity of putting hundreds of thousands of Coloradans out of work, instead downplaying the sector’s importance to the economy and in multiple instances saying that the “23,000” workers in the state can find a job somewhere else.  As one activist put it:

“I feel like you’re representing these guys, the 23,000 [sic], the 1 percent of workers that are in oil and gas and the ‘food on the table’ is hard for me because I think about people that don’t live in this district and live with this every single day… my passion comes from health and safety it doesn’t come from people putting food on their tables.  There are so many jobs in this state that are available for the people if they want to get out of oil and gas and if they want another job.”

Putting aside the ease with which activists seem to discount the prospect of 23,000 people losing their jobs, the fact is that Colorado’s oil and gas industry actually employs close to a quarter of a million Coloradans—many of whom are highly specialized professionals like geologists and environmental engineers.  These people represent 7 percent of Colorado’s workforce, not one.

Three participants braved the hostile crowd to offer up positive comments about the industry, how it has become more efficient and has adopted new rules and technologies to reduce emissions, and how it provides good-paying jobs that support the livelihood of thousands of families across the state.  Every time the speaker was interrupted with laughing, mocking and shouting about how their industry poisons air, water and “terrorizes” people.

The activists had no interest in having a real discussion or in hearing multiple perspectives; their only goal was to yell at lawmakers. As someone from the “International Socialist Organization” put it:

“I’m very tired of the policing of tones, I’m tired of this sort of civility politics that we get trapped into.  Something needs to be done now and that’s why we’re all here.  We’re here to tell you, we’re here to make our voices heard that fossil fuel needs to be kept in the ground we have 12 years to do this… the oil and gas industry needs to be stopped in its tracks.”

In a fitting end, the last commenter, who works in the oil and gas industry and asked to speak about 45 minutes prior, began talking about how important the industry is to everyday life and how we can’t shut it down overnight.  He was overpowered with yelling, as the above video shows.

Williams had to shout over the noise to declare the meeting over.

Despite the disrespectful and unprofessional behavior shown, Colorado Rising seemed pleased with how it went. 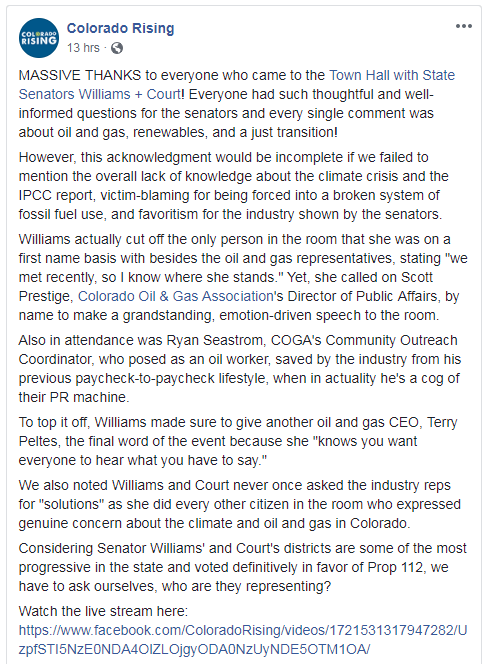 This type of behavior isn’t new for Colorado activists.  They’ve shut down countless events in a similar fashion.  In 2016, the Boulder Daily Camera pointed out that protesters who attended an event with then-Governor John Hickenlooper were characterized as “Acting like 10-year-old kids.”

It’s clear that Colorado’s anti-industry activists have no interest in having a rational discussion.  They are only focused on completely shutting down the oil and gas industry in Colorado.