After years of advocacy, hundreds of actual landowners, statewide groups, and a bipartisan group of elected officials have successfully pushed for the Bureau of Land Management (BLM) to allow leasing of federal minerals in Ohio’s Wayne National Forest (WNF). To date, the agency has leased 2,741 acres of federal minerals under the WNF surface, which has brought more than $8 million in sale proceeds from five competitive online lease sales since the U.S. Department of the Interior found that there would be “no significant impact” to the forest from leasing or development of minerals. And still today, the fight continues, as a group of landowners has put out a press release challenging the Center for Biological Diversity’s (CBD) campaign to ban fracking in the WNF. Becky Clutter, a volunteer board member of the National Association of Royalty Owners (NARO) Appalachia Chapter, and also the founder of the Landowners for Energy Access and Safe Exploration (LEASE), states in the press release,

“Groups like the out-of-state Center for Biological Diversity are out-of-touch with the needs of Ohioans, and it shows in their fearmongering and misinformation campaigns as well as the burdens their failed litigation and protests place on landowners and taxpayers. We will not stand by and let them rob us of our right to develop our private minerals economically.”

The reason landowners are gearing up for a fight is due to the fact that out-of-state environmental activist groups like the CBD continue to throw spaghetti to the wall to see what sticks in an effort to prevent mineral development in the Wayne. From lawsuits, administrative protests, media stunts — you name it, they have tried it. The battle cry has been fueled most recently by the CBD using the Forest Plan review process as a means to call for a fracking ban in the Wayne. “Keep It In the Ground” activists groups quickly hailed the decision as a win, claiming it was prompted by its lawsuit.

However, a closer look at the update to the Forest Plan and the actual facts around this process show that the Forest Plan review, which will begin next month, has nothing to do with the CBD lawsuit or media stunts, but rather was in response to the state’s decision to update their own Forest Action Plan by 2020. As the agency clearly states,

“For years, the USDA Forest Service, Ohio Department of Natural Resources (ODNR), and USDA Natural Resources Conservation Service (NRCS) have been innovating ways to collaborate in the restoration of southeast Ohio’s oak and hickory forest ecosystems. The next step to realizing that objective is having compatible long-term management plans that allow the organizations to work together more efficiently. With ODNR’s intention of revising their Forest Action Plan by 2020, the Wayne National Forest decided the time is right to revise its Forest Plan, to facilitate collaborative work efforts with our state partners (ODNR Division of Forestry Action Plan; ODNR Division of Wildlife Action Plan).”

If activists are still unclear as to the actual facts around this process, they will have ample opportunity to attend or participate in eight separate public events that the agency is hosting. This is a very important fact to remember, as we know that these groups will most certainly cry foul as this review process plays out in the months to come. After all, they have consistently called for more public comment and engagement throughout this years-long saga. Recall that in 2015, fringe environmental activists physically threw their public comments at agency employees in one of the most disrespectful acts of protest ever seen in Ohio. 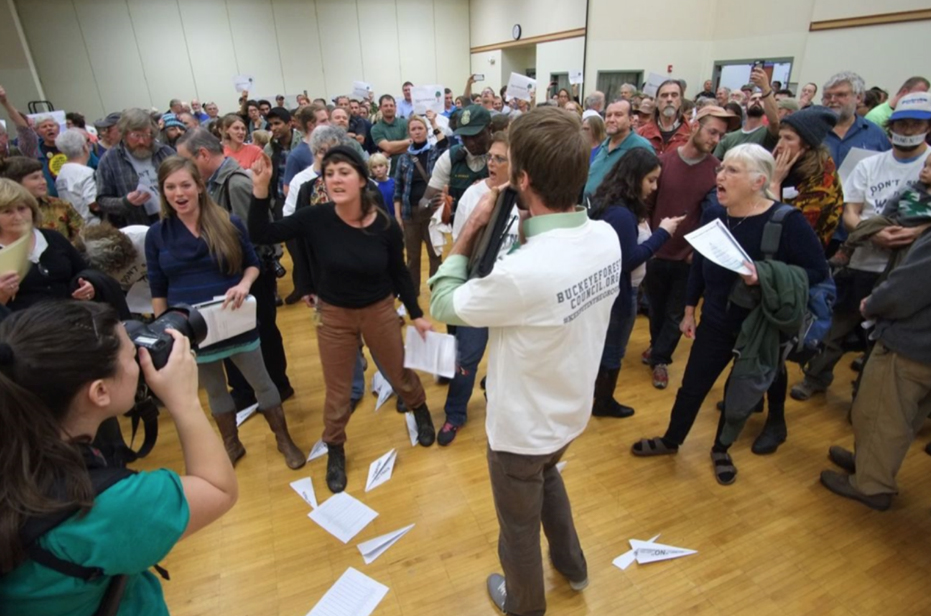 Armando Mendoza, a leasing supporter who attended this public comment session was actually spit on by the activists as well, as he reported:

“Rather than a conversation, debate, and civilized discussion, the anti-shale extremists turned Wednesday night’s public hearing on shale development in the Wayne into a circus. One of the environmental radicals even spit in my face. Others threw paper at the BLM and Forest Service officials as they attempted to explain the process. But based on the ‘show’ Wednesday night, it’s clear the environmental radicals opposed to domestic energy development are more interested in the politics of distraction than engaging in an informed public debate. Each person who spit and threw paper at BLM and Forest Service officials and refused to engage in a civilized discussion should be ashamed.”

Thankfully, these activist stunts have fallen flat, thanks largely to the fact that a bipartisan group of elected officials, statewide groups and hundreds of private land and mineral owners have continued to fight back. As Clutter has noted,

“Center for Biological Diversity does not have the best interests of Ohioans in mind as is evident in its efforts to ban fracking. The folks who live here know that we can enjoy the many outdoor activities and beautiful scenery in the Wayne, and also benefit from the economic opportunities that allowing oil and gas development provides.”

As EID has been showing year after year, the Center for Biological Diversity simply does not speak for Ohioans.