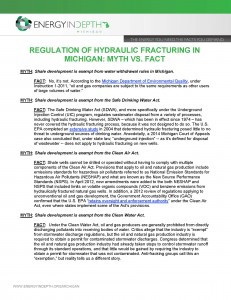 As domestic oil and gas development continues to create jobs, lower our trade deficit, and deliver increased energy security, the use of misinformation to describe hydraulic fracturing seems to be proliferating.  A major topic by groups opposed to the development of oil and gas is that shale development is “exempt” from major environmental laws, both at the state and federal level.

These so-called “exemptions” apply to the Safe Drinking Water Act, Clean Water Act and the Clean Air Act, as well as certain water withdrawal rules here in Michigan. The reality is the oil and gas industry is heavily regulated at both the state and federal level. In fact, the very laws that anti-fracking groups claim the industry is “exempted” from actually apply to development.

At a more local level, Michigan anti-fracking activists commonly claim that the oil and gas industry is “exempt” from Michigan’s water withdrawal laws. As the Sierra Club has alleged:

The reality is Michigan’s oil and gas industry is regulated under section 324 of the Natural Resources and Environmental Protection Act.  In fact, according to the Michigan DEQ, “oil and gas companies are subject to the same requirements as other users of large volumes of water.”

So in an effort to help separate fact from fiction, Energy In Depth has developed a one-page fact sheet to help clear the air about some of the biggest myths regarding the regulations that apply to oil and gas development. Be sure also to check out EID’s previous explanation – regarding supposed federal “exemptions” – by clicking here.