U.S. Sen. Ed Markey (D-Mass) – whose irrational opposition to needed natural gas infrastructure build-out in New England culminated in Boston importing Russian liquefied natural gas (LNG) this past winter – introduced legislation this week to reinstate the U.S. crude export ban. The rationale behind reinstating a ban at a time when the United States is experiencing record oil production is the misguided notion that surging oil exports are partially responsible for rising gasoline prices.

“Rather than sending American crude oil abroad to benefit Big Oil’s bottom line and foreign nations such as China, it should be kept here to help insulate consumers from geopolitical uncertainty and benefit American families.

“… Congress should reinstate the crude oil export ban to ensure that American crude stays here, insulates us to the greatest extent possible from global shocks, and protects American consumers at the pump.”

As has been the case with Markey’s “Keep It In the Ground”-appeasing infrastructure policies in his home state, his claim that oil exports are causing gasoline prices to spike is dead wrong. Here are the most egregious claims in the report, followed by the facts.

CLAIM: “Lifting the oil export ban and reducing our oil stockpiles have not allowed the United States to drive the price of oil or to keep gasoline prices low.”

FACT: Gasoline prices remain relatively low —and would be much higher right now had the crude export ban never been lifted.

It can’t be emphasized enough that refined products such as gasoline are traded on the world market and are determined by global market prices, namely, the global Brent crude index. As a 2014 EIA report noted:

“Gasoline is a globally traded commodity and, as a result, prices and changes in prices are highly correlated across global spot markets.”

That said, recent geopolitical events — most notably Venezuela’s collapse and President Trump’s decision to rescind the Iran nuclear deal — have combined with rising gasoline demand prompted by the summer driving season and a surging global economy to limit global supplies and send gasoline prices soaring. It has nothing to do with the U.S. exporting oil, and in fact, U.S. crude exports have kept gasoline prices from rising even higher.

As a 2015 Brookings Institution analysis explains why:

Because the United States has emerged as a major crude oil exporter — and has subsequently filled some of the global supply void created by the aforementioned geopolitically-driven supply issues — U.S. exports have kept global oil prices (and gasoline prices) lower than they would otherwise be.

For perspective, although U.S. gasoline prices averaged $2.96 a gallon this week, they are still well below 10-year average of more than $3.00 per gallon.

In fact, Americans were enjoying the lowest Memorial Day weekend gasoline prices in years this time a year ago, even though oil exports were surging. The difference this year: geopolitical events beyond the United States’ control.

It is also important to note that the domestic U.S. West Texas Index (WTI) oil price benchmark would be much lower than it currently is if the United States weren’t currently exporting roughly 2.3 million barrels of oil a day. That’s because U.S. producers’ market options would be limited by the lack of potential buyers, due to fact that a large number of American refineries are not ideally equipped to process the light, sweet crude oil that U.S. tight oil plays typically produce.

Put another way, shale oil is too good for many U.S. refineries, which for years spent billions of dollars on special equipment to process the dense, high-sulfur, low-quality crudes coming from Mexico, Venezuela, Canada and Saudi Arabia. This is why significant quantities of heavier crude from OPEC countries are still imported.

In contrast, China’s refineries are more widely set up to process light crude, a huge reason it has emerged as a major destination for U.S. oil. 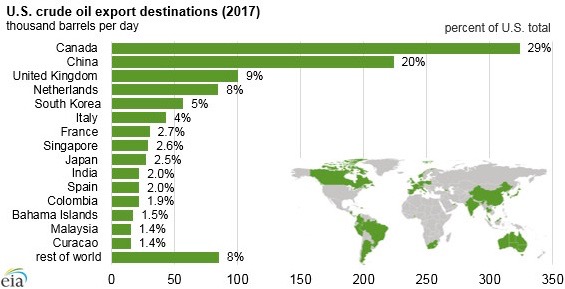 Bottom line: Had the crude export ban never been lifted, Brent prices would be spiking even more — sending gasoline prices even higher — while lower WTI prices due to a domestic supply glut would be driving down surging U.S. production, resulting in a devastating double-whammy for the U.S. economy.

CLAIM: “The United States Exports Historic Amounts of Crude But is Still Dependent on OPEC.”

Sen. Markey’s report states that, “We remain reliant on OPEC for approximately 2.5 million barrels of oil every day,” but fails to note that total is down 54 percent from the 5.4 million barrels per day the U.S. imported from OPEC countries in 2008.

It is no coincidence that dramatic decrease has occurred at the same time advances in hydraulic fracturing and horizontal drilling technologies have facilitated the shale revolution, allowing the United States to transition from a position of energy scarcity to its current status as the “undisputed leader” in global oil and natural gas production, according to International Energy Agency executive director Fatih Birol.

Far from being “dependent” on OPEC, a huge chunk of current imports can be traced to the aforementioned fact that a large number of U.S. refineries are set up to process the heavy, sour crude typically produced by OPEC nations.

What This is Really About: Appeasing the “Keep It In the Ground” Movement By Driving Down U.S. Production

If Sen. Markey were serious about keeping gasoline prices low and reducing OPEC imports, he’d do everything in his power to facilitate increased oil and natural gas production. Reinstating the oil export ban would do the complete opposite, as have many of his anti-pipeline policies.

Sen. Markey and the rest of the Massachusetts congressional delegation have repeatedly opposed and obstructed pipeline projects in New England, effectively stopping abundant Marcellus Shale gas from coming into a region where natural gas demand is growing. That delegation even recently sent a letter to Treasury Secretary Steven Mnuchin and Energy Secretary Rick Perry blaming the Trump Administration for Massachusetts’ import of LNG from Russia, even though its blatantly obvious to objective observers (including the Boston Globe) that Markey et al.’s “Keep It In the Ground” policies are to blame for the Russian LNG debacle.

These policies have led to sky-high energy prices in New England at the same time the rest of the United States is paying less for energy than ever before. And make no mistake: Markey’s attempt to appease his “Keep It In the Ground” base by imposing a policy that would drive down U.S. oil production and set us on reverse course to the days when we actually were at the mercy of OPEC would have a similar negative effect.

Senate Energy and Natural Resources Chairwoman Lisa Murkowski (R-Alaska) summed it up nicely this week when she said:

“This is pretty simple. If you don’t support access, leasing, production, pipelines, refineries, or the reasonable regulation of all of those, you’ll be left at the mercy of countries that don’t like us.”