According to the U.S. Environmental Protection Agency’s (EPA) latest Inventory of U.S. Greenhouse Gas Emission and Sinks, methane accounted for 10.6 percent of total greenhouse gas (GHG) emissions in 2014. While natural gas is more than 95 percent methane, the Inventory shows that methane emissions from the natural gas industry only account for about 2.6 percent of all U.S. GHG emissions, and those emissions are decreasing substantially. As the EPA Inventory states:

Such a significant decline in methane emissions from the natural gas industry is impressive, especially considering natural gas production during that same period increased over 53 percent. As the NCG points out, one of the reasons emissions are declining while production is increasing is the improvement of the natural gas infrastructure. According to the report:

“There are multiple reasons for this decline. First, equipment turnover typically results in improved performance in most sectors as newer, more efficient, and lower-emitting equipment replaces older equipment.” (p. 11)

In addition to equipment and infrastructure replacement, voluntary programs employed by companies also play a role in methane emissions reduction. These include federally created programs, such as the Natural Gas STAR Program and Global Methane Initiative, as well as collaborative programs between industry, non-profit and philanthropic organizations like the Center for Sustainable Shale Development and Our Nation’s Energy Future Coalition. By partnering with these programs, natural gas operators have cut methane emissions across the board. Through the Natural Gas STAR Program alone, the EPA estimates that program partners eliminated more 1.2 trillion cubic feet of methane emissions since 1993.

“While the regulations [from the New Source Performance Standards] do not directly address methane, the methane is contained in the same gas streams as the VOCs, so the regulations have the co-benefit of reducing methane as well as VOCs.” (p. 46-47)

Additionally, many of the ways companies meet state and federal methane emissions reduction goals are already taking place through voluntary efforts such as improving leak detection and replacing less efficient equipment. With multiple emission reduction programs and voluntary efforts in place, emissions per unit of natural gas produced continues to drop. According to the report:

“Absolute emissions declined by 15% between 1990 and 2014. Methane emissions per unit of gas produced declined by 43% over that same period.” (p. 8; emphasis added) 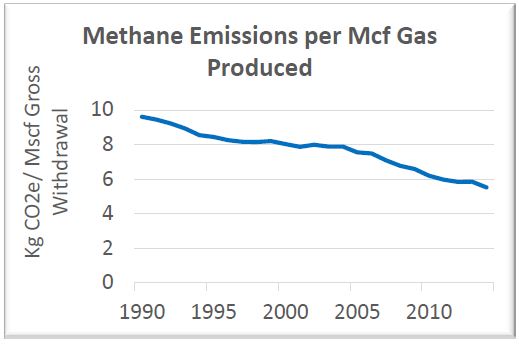 As this report shows, overall methane emissions in natural gas development are declining even as production has soared. Further, while actions taken in response to state and federal regulation aid in reducing emissions in the natural gas industry; technologies, practices and programs already in place are helping to ensure that methane emissions will continue to decrease.