The joint report with the National Association of State Energy Officials finds that the upstream portion of the oil and gas supply chain added 11,000 jobs in 2017, while the natural gas-fired electricity generation sector added an impressive 19,000 jobs. The former can be traced to a moderate rebound in commodity prices, while the report credits the latter trend to the continued switch to clean-burning natural gas for electricity generation.

Designed to supplement Bureau of Labor Statistics data, the report’s findings are buttressed by a survey of 24,000 employers — which included 400,000 calls to employers and 40,000 emails, according to an E&E News report. The report explains:

“Because the supplemental survey captures employment across a wide range of activities and industries, the report includes more than a million jobs that would not otherwise be identified as part of the Traditional Energy sectors.”

The report finds that in 2017 more than 510,000 were employed in oil/petroleum fuels occupations —which encompass the entire range of business activities that support both fuel extraction and production — a 1.5 percent increase from 2016. Natural gas production-related employment was 312,364 in 2017, up 2,000 jobs from 2016. 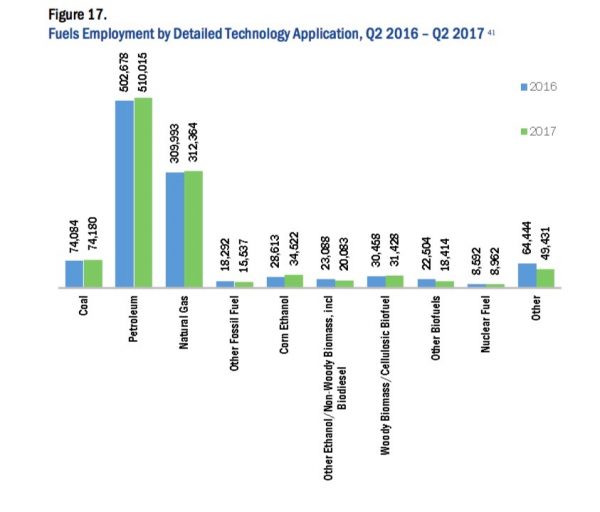 The increased jobs numbers correlate with an increase in both oil and natural gas production from 2016 to 2017, thanks in large part to a modest rebound in commodity prices following an extended price slump.

Taking a longer view, the report notes that oil and gas extraction employment has increased 16 percent since 2009, correlating directly with the shale revolution that has taken place during that time. 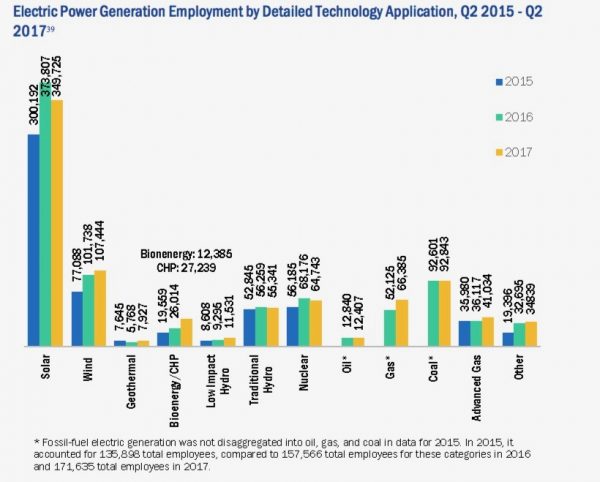 A majority of these jobs have been of the construction variety, as numerous new power plants are being built to accommodate an electricity generation fuel source that has become popular for both environmental and economic reasons. At the same time natural gas has become the top fuel source for electricity, Americans are paying less for electricity than ever before, while power sector carbon dioxide emissions have fallen to their lowest levels since 1988. This win-win is also creating jobs. From the report:

“This transition has resulted in employment gains across Electric Power Generation, with a particular impact on the construction industry…”

The report notes that natural gas power plant-related employment is expected to grow another five percent in 2018, spearheaded by construction of new plants. Better than two-thirds of 32 gigawatts (GW) of new electric generating capacity expected to come online in 2018 will be from natural gas.

Though the report’s 2017 employment data for the midstream portion of the industry is far less clear than the upstream and electricity generation data, the report notes there was an eight percent increase in the construction segment of the transmission, distribution and storage category — which includes oil and natural gas pipeline construction.

The report notes that of the 1,332,826 workers employed in the transmission, distribution and storage category in 2017, 34 percent of the total were “in construction companies that construct pipeline and other infrastructure that support Transmission, Distribution, and Storage, including both fuels and electricity.” From the report:

“Construction firms contributed the most employment to Transmission, Distribution, and Storage activities in 2017, with 458,040 jobs, an 8 percent increase from 2016. This work included pipeline and electric transmission and distribution activity, as well as the development of smart and micro grids…”

With record-breaking U.S. oil and natural gas production forecasted for 2018, the positive jobs data detailed in this report is likely just the first chapter in a yet-to-be-completed book detailing the oil and gas industry’s robust recovery from the dark days of 2015 and 2016. In fact, the BLS expects industry to drive U.S. jobs growth through 2026.

These trends can all be traced to the incredible advancements in horizontal drilling and hydraulic fracturing technology that have already created at least 2.7 million American jobs. Fortunately, the best may be yet to come.