The National Bureau of Economic Research (NBER) released a report this week that quantified U.S. economic activity from 2012 to 2014 and found that $3.5 trillion of the increased equity of the U.S. stock market has been the result of shale oil development.

Further, NBER looked at real world impacts on the economy from this increase and found that shale oil development has also stimulated job growth in a big way. From the report:

“We show that the shale discovery announcement returns have significant explanatory power for the cross-section of employment growth rates of U.S. industries, indicating that the effect we identify operates through real economic channels. In the aggregate, we estimate that during the shale oil period 4,600,000 (net) new jobs are linked with the development of shale oil technology. This represents a 4.2% increase in the number of jobs across the industries in our study, compared to the aggregate number of jobs at the beginning of the shale oil period.” (emphasis added)

This growth in activity stimulates other aspects of the economy as well. For example the report identifies that:

“… an increase in fracking/drilling activity increases demand for output of (imperfectly competitive) industries that provide labor or materials for shale oil extraction, the positive news about shale sector productivity is good news for these industries — we refer to this as the ‘supply-chain effect.’”

EID has noted before that ancillary industries — or those that make up the supply chain — have experienced major growth as a result of shale development. Take a moment to watch the following EID video to learn more about the impacts on the supply chain.

The report also identifies that,

“To the extent that increasing income of households involved in shale oil production, directly or indirectly, improves the health of the local economies, it might benefit consumer-oriented industries that experience increasing demand for their goods — we can refer to this as the ‘income effect.’”

In addition to allowing people stimulate their local economics by spending higher levels of disposable income at local businesses, the “income effect” can lead to even bigger things, such as the opening of new businesses or what recently occurred in Susquehanna County, Pa., where residents were able to raise money to assist the donations of Cabot Oil and Gas and build a new, much-needed hospital for the county.

“Finally, to the extent that good news about shale oil supply can depress oil prices, it may benefit a variety of industries whose output consists of goods that are complements with oil (e.g. cars) or whose expenditure shares increase through the effect on the consumers’ budget constraints — this can be called the ‘price effect.’”

Nowhere is this “price effect” more visible than in the manufacturing industry. That said, it is important to understand the NBER report only looks at shale oil development and does not include shale gas in its estimates.

Shale gas has a great story to tell as well.

As the following EID chart shows, U.S. manufacturing has been revitalized at the same time shale gas production skyrocketed. 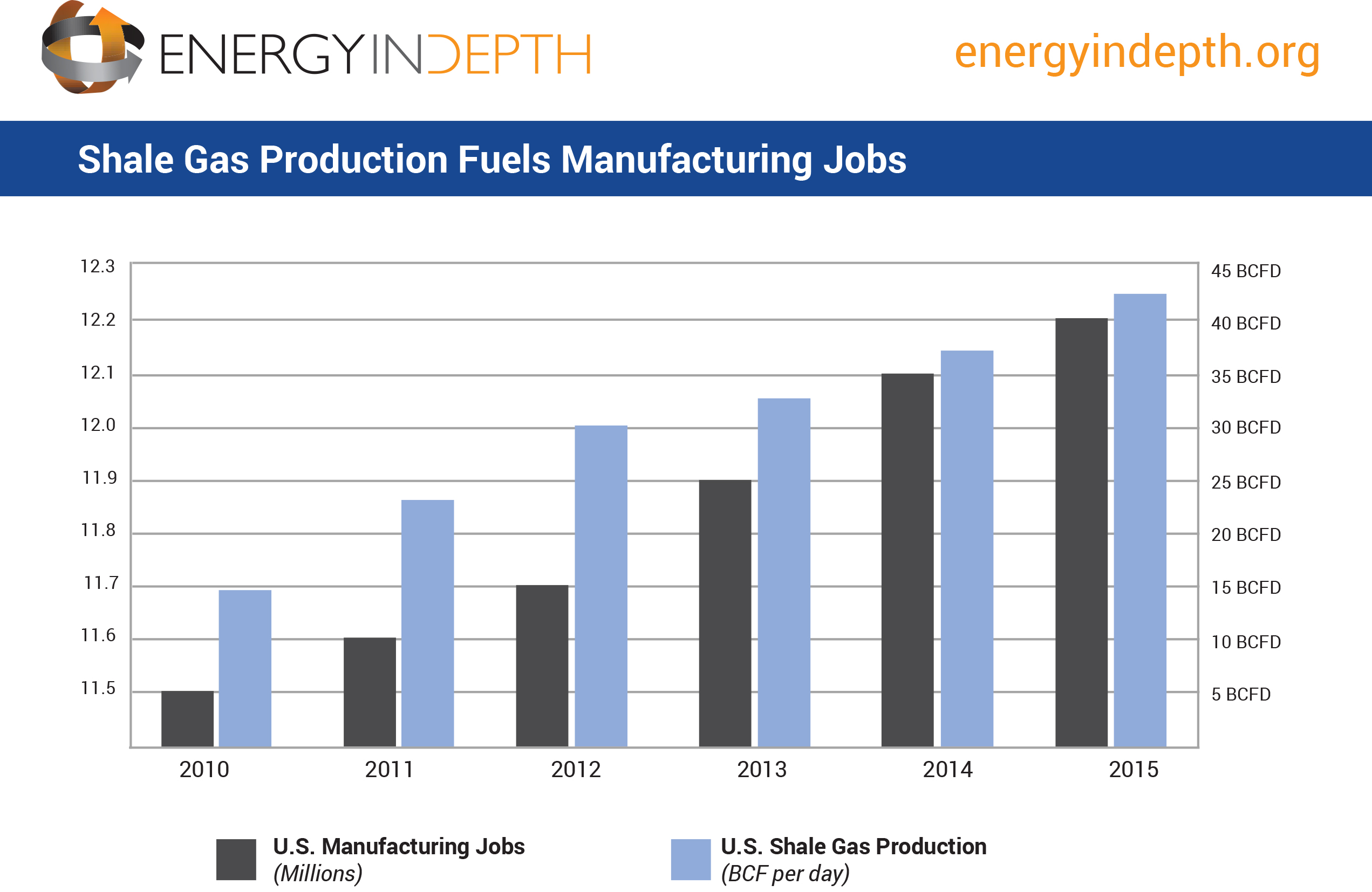 There are numerous examples throughout the country of shale gas and oil development’s stimulation of jobs growth.

As of 2014, the Marcellus Shale alone created more than 15,000 direct jobs in Pennsylvania, representing nearly a 260 percent increase in employment since 2007. The Leeds School of Business in Colorado reported that the industry supported 94,000 jobs in the state in 2014. In Texas, that number was 444,000, and oil extraction supported more than 24,000 jobs in North Dakota, where the state touted a minuscule 2.8 percent unemployment rate.

All this said, it’s important to note that the $3.5 trillion in economic activity referenced in the NBER report refers to the impact of shale oil development alone. Imagine what that figure would be if it included all shale development across the country. Nonetheless, it’s clear the benefits from this industry are reaching the entire country, and this report just adds to that body of evidence. As U.S. Energy Secretary Ernest Moniz said in August,

“The increased production of oil and natural gas in the United States has, obviously, been a major story in terms of our economy, and also our environment.”