The oil and gas industry along the Gulf of Mexico is set for a major expansion by 2019, according to a new report from Louisiana State University’s (LSU) Center for Energy Studies. The report predicts a surge in production and processing of oil and gas in the region, even in a continuing climate relatively low commodity prices.

The inaugural “Gulf Coast Energy Outlook” singles out 2017 as a peak year for new energy manufacturing capital spending in Louisiana, with better than $25 billion in new projects announced or completed this year, mostly in the form of new liquefied natural gas (LNG) export terminals worth a cumulative $17 billion. 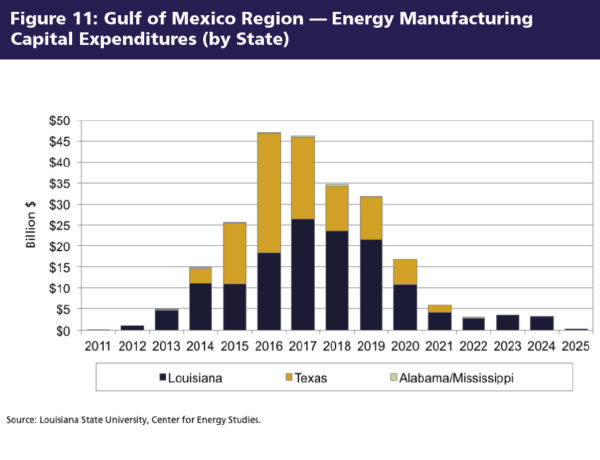 This capital spending represents “historic investments in mid-stream and down-stream sectors” and is concentrated in LNG, methanol/ammonia plants, and cracker/polymer projects, according to the report.

The report also predicts that U.S. oil and gas production will continue its meteoric rise, mostly through further technological advances in hydraulic fracturing and shale exploration. The LSU report predicts U.S. oil production will reach an all-time record high of 10 million barrels per day (mbpd) by 2019 and cross the once unimaginable 12 mbpd threshold by 2022. 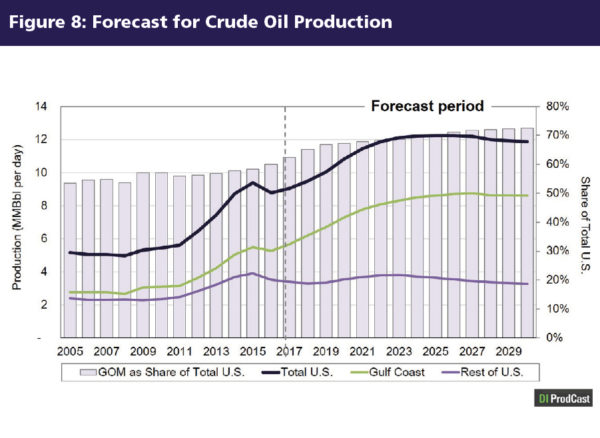 The report also forecasts U.S. natural gas production soon surpassing record levels reached in 2015 and growing all the way through 2030. 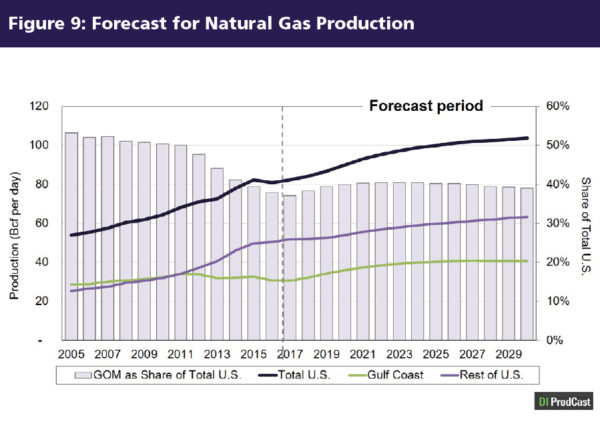 Much of this forecasted record production will be spearheaded by the Gulf Coast region, according to the report,

“Total U.S. crude production is projected to increase over 10 million barrels per day (MMBbls/d) by 2020, with much of this increased concentrated in the Gulf Coast region. Thus, the Gulf Coast region is expected to increase in its relative contribution to U.S. crude oil production over the next decade. U.S. natural gas production continues to be resilient and shows continued strong growth through 2020 and beyond. The Gulf Coast region makes a significant contribution to the 80 billion cubic feet per day (Bcf/d) U.S. market, but the Marcellus accounts for the largest relative share.”

Meanwhile, continuing supplies of cheap and plentiful natural gas are predicted to continue buoying the refining, chemicals, and fertilizer industry along the Gulf, which already employ 253,000 people in the region.

These low cost supplies have already facilitated $240 billion in major industrial projects announced or completed on the Gulf Coast, according to the report. It also highlighted the ability of drillers in key shale basins like the Bakken to remain profitable even in a below $40 per barrel scenario. This new shale production has also vastly changed the makeup of the oil and gas supply in the region with offshore representing stable production, but a declining share of overall output.

The shale boom also means a boom in LNG, with a potential U.S. liquefaction capacity exceeding 50 Bcf per day by 2025, if all current terminal applications are approved. Nearly 95 percent of this capacity would be in the Gulf Region, supporting thousands of new jobs and expanding the reach of American natural gas to markets all over the world.

The report predicts a modest increase in oil prices with forecasts of $51 to $59 per barrel in 2017 possibly rising as high as $75 per barrel by the end of 2018. These increases would facilitate the return of approximately 8,000 jobs to a region that has been hit hard by the fall in prices, particularly in Louisiana’s upstream oil and gas production.

Refining is yet another bright spot ahead for the industry and the region, with significant investments in crude oil transport, including pipeline reversals, expansions, and additions predicted. The report also singled out the lifting of the crude oil export ban, saying it “can create an environment that allows for the Gulf Coast to become the epicenter for hydrocarbon trading.”

The Gulf Coast Energy Outlook was sponsored by Regions Bank and created by a team including Christopher K. Coombs and Dek Terrell of the LSU Economics & Policy Research Group, as well as David E. Dismukes and Gregory B. Upton, Jr. of the LSU Center for Energy Studies.