The future of Canada’s liquified natural gas (LNG) industry could generate significant, long-lasting employment opportunities for virtually every province, according to a new Conference Board of Canada report. CBC found substantial economic impacts based on a scenario that creates a 56 million tonne per annum LNG industrial footprint in British Columbia.

Some of the report’s most compelling figures speak to the potential impacts that LNG will have on GDP and employment. Based on its analysis, between 2020 and 2064 total annual investments in LNG would average around $11 billion, or $500 billion total over the 44-year period. Furthermore, Canada’s GDP would increase $11 billion per year, with British Columbia’s portion exceeding $8 billion annually:

Under the scenario, Canada is projected to create 96,550 new jobs over the lifespan of increased LNG development. In British Columbia, the province could see 71,000 new jobs, a 3.2 percent increase in total provincial employment. The report finds Ontario, Alberta, and Quebec would also see permanent jobs increases.

In terms of potential markets for increased LNG production, British Colombia has a unique competitive advantage in reaching the Asia-Pacific markets: it’s close proximity to the region. Furthermore, the Asia-Pacific region is experiencing increasingly high demand for natural gas for uses ranging from residential and commercial heating to industrial processing. Countries across the region, which lack a reliable source of domestic energy, heavily depend on importing natural gas:

“In 2018, imports accounted for about 75 per cent of global LNG activity on a volume basis. Countries like China, Japan, and South Korea that lack sufficient domestic energy resources have been using a growing amount of natural gas.” 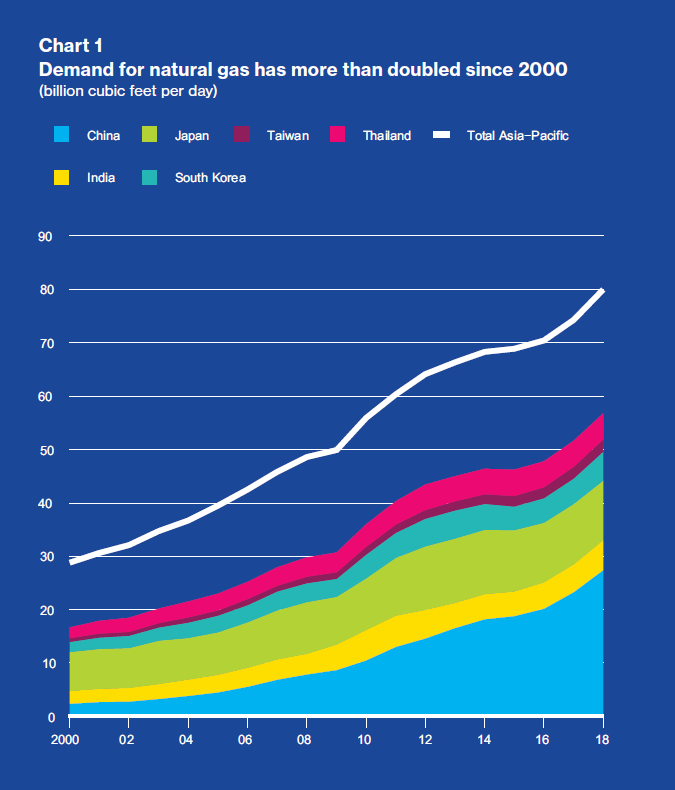 As depicted in Chart 1, demand for natural gas continues to trend upwards for a number of countries in the region. Since 2000, natural gas demand has increased two-fold—with demand reaching up to 80 billion cubic feet per day in 2018.

The development of LNG projects would also generate billions of dollars for the Canadian government. Over the 44-year timeframe, LNG development would generate more than $90 billion for provinces. More specifically, British Columbia would gain more than $78 billion:

“Under this scenario, the LNG industry would generate over $2.3 billion in annual provincial and territorial tax and royalty revenues, with the majority ($2 billion) going into B.C.’s coffers. This together with natural gas royalties ($609 million annually) would make the LNG sector one of the largest revenue generators for B.C.’s provincial government.”

Notably, the benefits of LNG go beyond economics. A recent American Petroleum Institute study conducted with researchers at ICF International found that over its lifecycle, LNG used for power generation emits significantly less greenhouse gas emissions than coal. In fact, the global coal-to-gas switch – increasingly delivered via LNG – has saved around 500 million tons of carbon dioxide since 2010, according to the International Energy Agency.

The evidence is clear — investments in Canadian LNG infrastructure provide Canadians a means to substantially improve various segments of the economy, while being protective of the environment. From GDP growth and the creation of hundreds of thousands of well-paying jobs, to billions of dollars of revenue for the federal government, LNG is a clear path forward for a secure and stable Canadian economy.