The oil and gas development process, including associated regulations designed to protect water resources, is “managed best” at the state level, a recent report from the Groundwater Protection Council (GWPC), a nonprofit organization made up of groundwater regulatory agencies, finds. The report notes that while regulatory policies and programs in place related to oil and natural development vary from state to state, this does not mean current state regulations are deficient, but instead that state agencies are best equipped to craft regulations specific to their unique geographies.

Building on previous reports published in 2009 and 2013, GWPC’s third edition of “State Oil and Natural Gas Regulations Designed to Protect Water Resources” outlines improvements implemented by state regulators, as well as the degree to which each portion of the oil and gas development process is sufficiently regulated at a state level. According to the report:

“Regulation of oil and gas field activities is managed best at the level where regional and local conditions are understood and where rules can be tailored to fit the needs of the local environment. While some related oil and gas regulation does occur at the local and federal governmental level, on most issues the greatest experience, knowledge, and information necessary to regulate effectively rests with state regulatory agencies.” (emphasis added)

Specifically, the report touches on the importance of hydraulic fracturing (fracking), along with the mechanisms in place by both agencies and industry stakeholders to ensure groundwater is protected and risks to these water sources is properly mitigated. As a “critical component” of the development process, the report mentions that hydraulically fractured wells have become increasingly relied upon for domestic production, as such wells have gone from being responsible for just 10 percent of U.S. marketed natural gas production in 2000 to roughly 66 percent by the end of 2015. Further, according to the U.S. Energy Information Administration (EIA), hydraulically fractured horizontal wells accounted for 69 percent of all oil and gas wells drilled in the U.S. in 2016.

Fracking’s prevalence is important, not only for facilitating increased oil and natural gas output, but also for mitigating environmental impacts. As the report finds, the amount of resources produced from a single horizontally drilled well, coupled with the improved production efficiency associated with fracking, minimizes surface impacts. The report states:

“The only viable alternative to fracturing the producing formations in reservoirs with low permeability would be to drill more wells in an area. Given the costs of drilling, the risks associated with creating multiple new vertical pathways for fluid migration, and the fact that it could take very large numbers of wells located within a very small area to equal the production of even a single hydraulically fractured well, generally this alternative is neither environmentally desirable nor economically viable.” (emphasis added)

Also of note is the report’s distinction of what “fracking” is and how that contrasts with what the term has come to mean to media not familiar with the process, as well as activist groups who oppose oil and gas development and intentionally obscure public understanding of it. The difference in what those groups view as “fracking” and what the process entails, has led to widespread misunderstanding of the process and, at worst, wildly misplaced concern from the public:

“To the oil and gas industry, ‘hydraulic fracturing’ generally is understood to mean the actual process of pumping fluids and proppant under pressure to fracture the rock. To others, hydraulic fracturing has become a more inclusive term that encompasses every activity associated with natural gas development from pad construction, drilling, production, pipeline transportation of gas, midstream processing of the product, and the disposal of waste products. Differences in the definition of hydraulic fracturing have led to misunderstandings and resulted in a greater level of concern than may have otherwise been associated with the discrete process of fracturing the formation.”

In addition to addressing the hydraulic fracturing process overall, the report also examined issues related to specific portions of fracking and development. For example, the report noted that fracturing fluids — typically composed of 99 percent water and sand, with the remaining one percent consisting of chemical additives (i.e. biocides to prevent bacteria growth) – are not only well regulated, but safe:

“The majority of additives to fracturing fluids, including sodium chloride, potassium chloride, and diluted acids, present low to very low risks to humans and the environment.” (emphasis added)

Further mitigating risk to groundwater resources, state agencies implement regulations on well construction through both its construction and isolation techniques designed to address the unique geology of each state. For example, while fracking takes place several thousand feet below even the deepest groundwater zones, state regulators have taken steps to require a “minimum vertical distance” in case some areas house reserves at shallower depths. But even if that is the case, states such as Texas have put in place regulations to safeguard water resources in the uncommon instance fracturing takes place within the “minimum vertical distance.”

With these regulations in place, coupled with efforts from operators to better predict how the formation will react to fracking such as “advanced computer modeling in fracture design,” potential impacts on water are extremely small. According to the report:

“Regardless, the lack of demonstrated groundwater contamination where substantial intervals between the fractured zone and protected groundwater exist make it reasonable to conclude that the risk of fracture fluid intrusion into groundwater from hydraulic fraction of deeper conventional and unconventional oil and gas zones.”

This study is just the latest of over two dozen scientific studies and assessments that conclude that fracking does not pose a major risk to drinking water resources.

While not an exhaustive list, other protections employed include pressure monitoring during the fracking process in states like California and Texas; review of the area around the wellbore for potential existing pathways to water resources states such as Alaska and Ohio; and adjacent water well testing and monitoring in several states including Colorado, Ohio and West Virginia. Add to these requirements the various regulations on disclosure and reporting of fluids used in fracking, well casing construction (the layers of steel and cement surrounding a well underground), wastewater storage and recycling, as well as well site remediation, and it’s clear that fracking is a highly regulated and safe process. 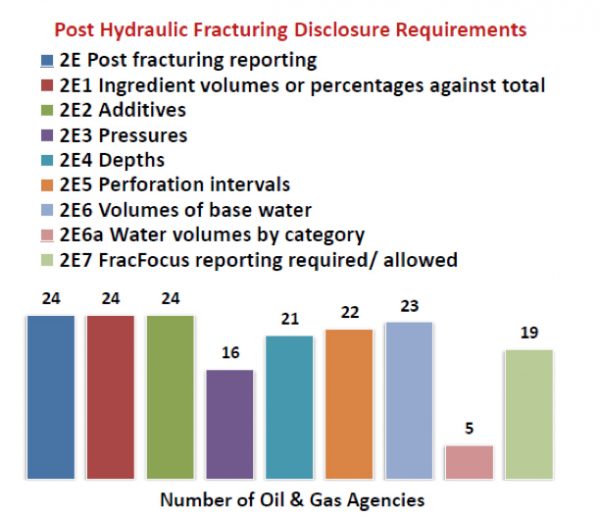 Considering the complexity of development and the unique geologies across the county, this report makes clear the fact that states are best equipped to oversee oil and gas operations. Attempting to take a one-size-fits-all approach to regulation from a federal level would not only be misguided, but also ineffective.