A lot can change in four years, and in the case of the U.S. natural gas industry, a lot of things have changed for the better since 2013. This is evidenced by a new American Petroleum Institute (API) study released this week that finds U.S. liquefied natural gas (LNG) exports could support more than 450,000 additional American jobs and add as much as $73 billion to the U.S. economy by 2040 — all while having a minimal impact on domestic natural gas prices.

This most recent API LNG study, conducted by ICF International, is even more optimistic about the future of U.S. LNG exports than a similar API/ICF report released four years ago. This is largely because upstream technological advances have helped natural gas development become more efficient and price-responsive since that previous report. America’s natural gas resource base is also significantly larger than it was back in 2013 — jumping from 3,550 trillion cubic feet (tcf) to nearly 3,700 tcf, according to the report. 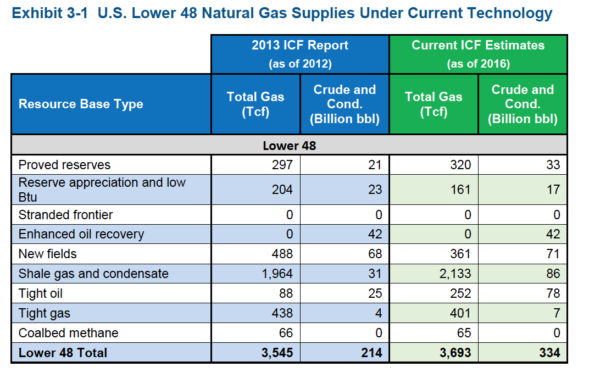 Throw in the fact that the global market for U.S. LNG has expanded in recent years, and its no wonder the study finds America can export more LNG with fewer negative domestic consequences over the next 20-plus years than ICF forecasted in 2013. From the report,

“Due primarily to the larger and more price-responsive natural gas supplies, the projected price impacts of LNG exports are about one-half of the levels expected in the 2013 Report. We now estimate a price increase of 5 to 6 cents/MMBtu per one Bcfd of exports versus the 2013 estimate of 11 to 12 cents.”

“… Also, because rig efficiency, well design, and well productivity trends have all improved and current expectations are that future improvements in upstream technology will continue to be substantial, the resource base available at reasonable prices will expand in the future.”

The report forecasts the global market for LNG increasing to 32 trillion cubic feet (tcf) by 2040, a 45 percent increase from the forecast of 22 tcf ICF’s 2013 report found. This projected global demand growth is in line with recent forecasts by the International Energy Agency (EIA), U.S. Energy Information Administration (EIA) and Bloomberg New Energy Finance’s (BNEF) Global LNG Outlook 2017, all of which predict LNG demand will rise due to its abundant supply and climate benefits over other fossil fuels.

Similarly, ICF’s forecast of America’s potential 2040 LNG global market share jumped from 8 to 24 billion cubic feet per day (bcfd) in this new report, compared to the 4 to 16 bcfd per day forecasted in 2013.

ICF traces the latter upwardly revised projections to several advantages the U.S. holds over other LNG exporting competitors, including the “window of opportunity” extended by recent cancellations, suspensions and the general slow pace of development of non-U.S. LNG projects throughout the world,

Based on the most recent updates on various domestic LNG liquefaction/export facility construction projects, the continental U.S. could see its current LNG exporting capacity more than triple by this time next year.

‘“The Cove Point export project remains on schedule for completion in the fourth quarter of this year,” a spokesman for Dominion Energy told Oil & Gas 360 via email. In its September update, Cove Point posted a statement on its website saying that “the liquefaction project is 95 percent complete; there are currently more than 3,200 construction workers on site. The company said all of the major equipment has been placed, cranes have been removed and now the focus is on commissioning activities.”

Sempra-Cameron LNG’s Hackberry, La., facility; Cheniere’s Corpus Christi, Tex., facility; Kinder Morgan’s Elba Island, Ga., facility; and Freeport LNG’s Texas facility are all under construction and could be in operation by the end of next year.

Cheniere is also expected to open train five of its Sabine Pass location in the third quarter of 2019. Collectively, this could bring the U.S.’s total LNG exporting capacity from 2.1 billion cubic feet per day (bcfd) to 11 bcfd in just two years, according to the EIA. 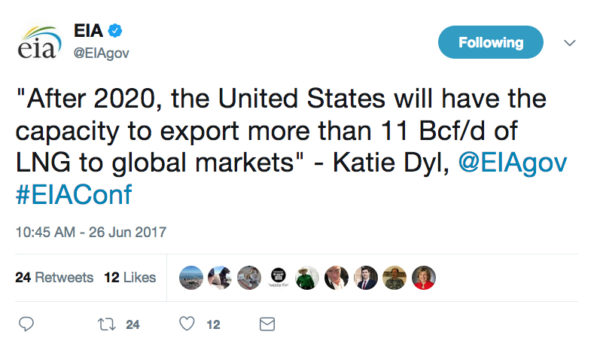 A pair of Charles, La., facilities (Lake Charles LNG, Magnolia LNG) have received Federal Energy Regulatory Commission (FERC) approval, as have Cameron LNG’s planned Hackberry, La., facility and ExxonMobil’s planned Texas facility. These projects could all be in operation by 2023, while numerous notable proposed facilities, such as Oregon’s Jordan Cove, have filed for filed for FERC approval as well.

Considering the progress of all these projects and the findings of this API report, it’s no wonder experts believe the U.S. will be the world’s third largest LNG exporter by 2020 and possibly the world’s top LNG exporter by 2022. This is an incredible development, considering it was less than two years ago that the first ever shipment of LNG from the continental U.S. was shipped out of Sabine Pass. The U.S. has already shipped LNG to 26 countries in just 19 months.

Energy experts Agnia Grigas may have said it best when she recently noted, “The United States finds itself in a rather unique position as an energy superpower, and the full implications of this new-found energy strength are not yet fully grasped.”