Report: Over 50,000 American Jobs to be Created by Natural Gas Exporters

The United States will experience tremendous growth in job opportunities and economic productivity through 2050 thanks to the rise in natural gas exports, according to a new study commissioned by an energy industry trade group. As natural gas production in the United States keeps rising, there are more and more efforts underway to export the additional gas overseas as liquefied natural gas, or LNG, which will spur sustainable growth in the energy sector and related industries. This new study, Calculating the Economic Benefits of U.S. LNG Exports, quantifies how these developments will play out in the economy.

The report, prepared for LNG Allies by strategy consulting firm ICF, is the latest assessment to conclude that the shale boom is powering economic growth across the United States and throughout several economic sectors. Using baseline production and export forecasts from the US Energy Information Administration (EIA), the LNG Allies study finds that roughly 50,000 to 100,000 jobs will be supported by LNG exporters through 2050. 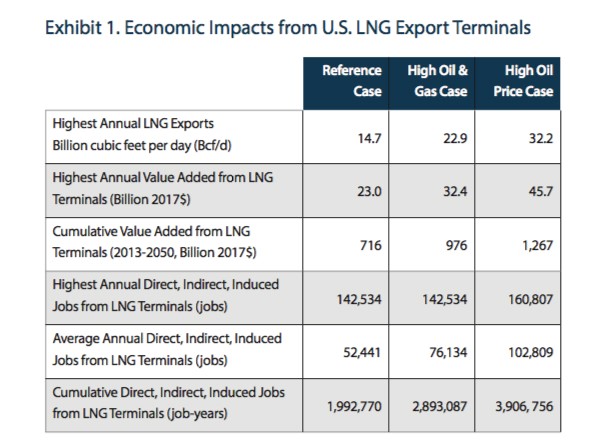 The LNG exporters will also spur enough upstream production to support a further 150,000 to 330,000 jobs across the natural gas industry. In total, LNG exports will add anywhere from $716 billion to $1.2 trillion of value to the US economy by mid-century, according to the report.

In conducting this assessment, ICF’s analysts reviewed possible natural gas production and export scenarios as described by the U.S. Energy Information Administration’s 2018 Annual Energy Outlook. Specifically, they reviewed the Reference case – which is the set of outcomes that the EIA believes to be the most likely path of development – along with a case in which future developments are heavily influenced by improved access to more oil and gas resources, and another that assumes much higher prices for oil and gas. The Reference case offers the most conservative – but still very impressive and beneficial – set of economic outcomes, while higher prices or improved productivity would spur even more growth.

At a rollout presentation held on Tuesday in Washington, D.C., LNG Allies Executive Director Fred Hutchison expressed optimism that more LNG production and export facilities would be commissioned in the near future. Each one of these projects are expected to directly support tens of thousands of construction jobs during the construction phase, and then drive upstream job creation once they are operational.

So how many more export terminals will rise? Presently, four more are in the works. Cheniere is building a second LNG terminal in Corpus Christi, Texas (and expanding its terminal at Sabine Pass). Sempra is building Cameron LNG in Louisiana, Freeport LNG is under construction in Freeport, Texas, and Elba Island LNG is nearing completion in Georgia. Three more terminals – Golden Pass, Magnolia and Lake Charles LNG – are fully permitted but have not yet begun construction. Another 18 terminals have been proposed and are seeking permits from regulatory agencies.

With American natural gas production showing no signs of slowing down, these LNG exporters seem to have a bright future ahead of them. 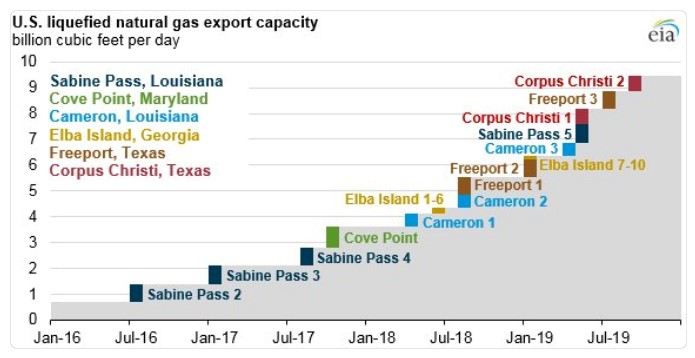