Over the past 10 years, shale development has had a profound impact on American natural gas production, trade, electric generation and carbon emissions reductions, according to a new report from research firm IHS Markit. Titled, The Shale Gale turns 10: A power wind at America’s back, the report outlines the countless ways in which innovation in shale development – namely, hydraulic fracturing and horizontal drilling – has shaped the economy and position the United State to be a key global producer and exporter of natural gas over the coming decades.

The most immediate impact from shale development’s growth over the past 10 years is the rise in production of natural gas – what the authors refer to as the “Shale Gale.” From concerns over domestic natural gas supplies and declining production in the early and mid-2000s, the United States experienced a 40 percent increase in natural gas production from 2007 to 2017. Production is showing no signs of slowing either, as the report mentions:

“And the pace of growth is accelerating. For 2018, we expect natural gas production to be up 7 billion cubic feet per day (Bcf/d) relative to 2017. Altogether, we anticipate that US production could grow by about another 60% over the next 20 years.” 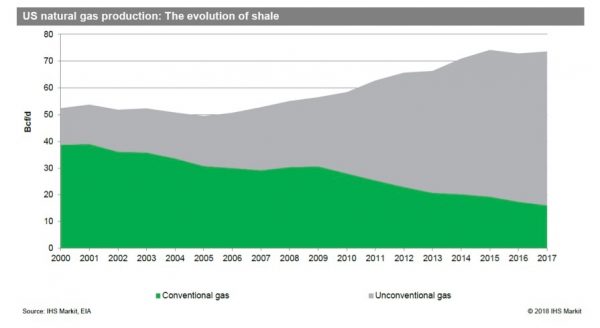 Advances in shale development have not only allowed for increased production, but also the available resources we are able to reach. According to the report, it’s estimated that U.S. recoverable resources increased by 52 percent between 2008 to 2016, growing from 2,074 trillion cubic feet (Tcf) to 3,141 Tcf over the course of just eight years.

With increasing production, the United States is quickly turning to natural gas as a lower cost, cleaner burning fuel source. Between 2007 and 2017, natural gas production jumped from 51.6 Bcf/d to 72.6 Bcf/d, the report notes. Over roughly that same period, natural gas’s share of total U.S. energy consumption grew from 22 percent to 29 percent from 2006 to 2017.

“Gas has become a backbone of electric generation in the United States.”

Accompanying the increased use of natural gas is carbon emissions reductions and other environmental benefits. As a cleaner burning fuel source, natural gas emits significantly less carbon dioxide (CO2) (and other emissions, such as sulfur dioxide) than other fossil fuels. Because of this, the authors estimate that CO2 emissions from power generation in 2017 were down 30 percent from 2005, with over half of that decline stemming from coal-to-gas generation switching. 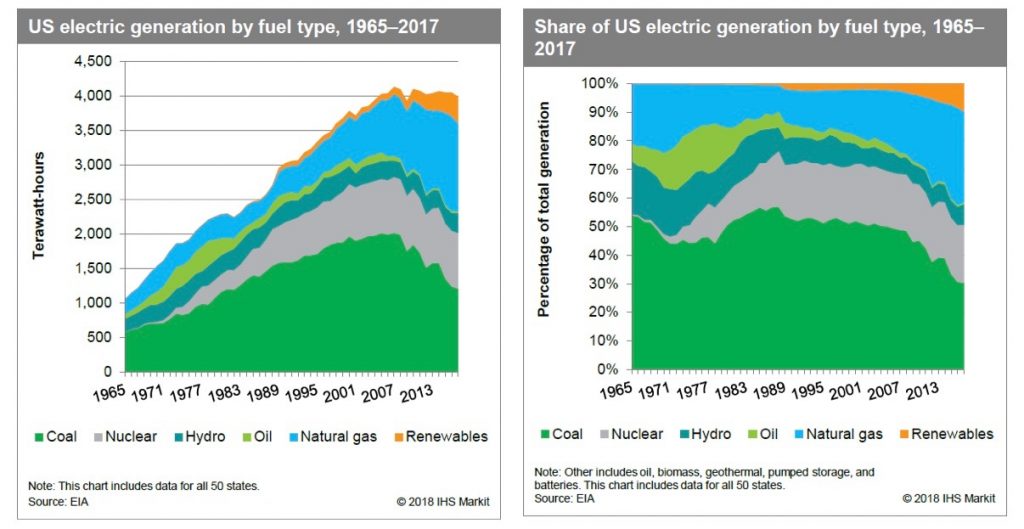 “We expect that, over the next five years, the current nameplate liquefaction capacity of 3.1 Bcf/d of LNG exports will grow by another 6.9 Bcf/d. By 2025, the United States is expected to be producing 92 Bcf/d and will rank as one of the world’s largest exporters of LNG.” 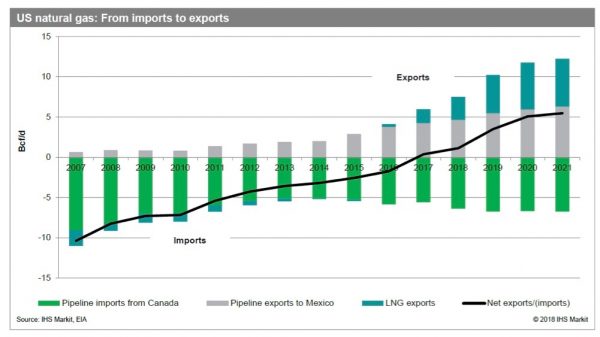 While the advances in shale development over the past 10 years might not be as apparent as those made in medicine or transportation, that does not mean they are any less dramatic. Thanks to hydraulic fracturing and horizontal drilling, the United States is shaking up the global energy market while also improving energy security, the domestic economy and the environment.