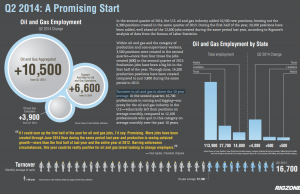 It’s not surprising to most that oil and natural gas production continues to create jobs across the nation. As EID recently highlighted, the Marcellus Shale alone has created 15,114 direct jobs in Pennsylvania, a nearly 260 percent increase in employment since 2007.  And reports from IHS CERA have found “the entire unconventional oil and gas value chain currently supports more than 2.1 million jobs.” But as a new data from the U.S. Bureau of Labor Statistics highlight, the oil and natural gas industry is not just supporting American workers – it is creating more jobs now than maybe ever before.

A total of 6,600 of those new positions have been created in support roles for the industry – jobs including construction, seismic testing, banking, and maintenance – while others were direct from oil and gas companies. And while turnover is higher than it has been before, more opportunities continue to be created in the oil and gas field. From the report:

“Within oil and gas and the category of production and non-supervisory workers, 3,500 positions were created in the second quarter—more than four times the jobs created (800) in the second quarter of 2013. Production jobs have been a big hit in the first half of the year. Through June, 14,200 production positions have been created compared to just 3,800 during the same period in 2013.”

While both 2013 and 2014 job numbers highlight the immense impact shale development is having on American employment, the growth in 2014 has many excited for what is still to come for workers in this industry. According to Paul Caplan, president of Rigzone, “barring unforeseen circumstances, this year could be really positive for oil and gas talent looking to change employers.”