Combined with the CEA findings in Ohio and Pennsylvania, these reports show that the Appalachian Basin experienced more than $80 billion in savings during this time period. 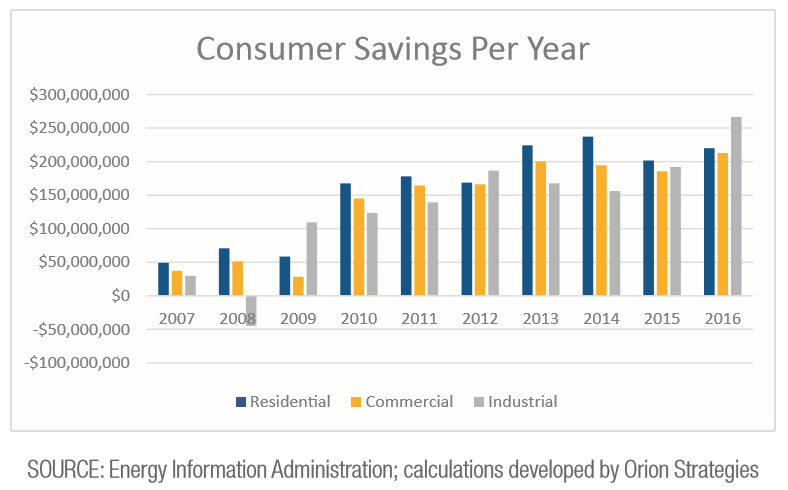 “This report highlights how West Virginia’s families and energy users benefit from the production of West Virginia’s natural resources and the ability to transport that energy through pipeline infrastructure, all of which provides millions of dollars annually to fund our schools, hospitals, roads, and communities. The mining and production of traditional energy resources, like natural gas, have supported communities throughout the state for generations and has been integral in bringing affordable energy to the rest of the country for years. We are pleased to see how lower fuel prices have helped West Virginians save more than $4 billion in the past decade.”

The Mountain State was the United States’ seventh-largest natural gas producer in 2017, contributing 1.6 trillion cubic feet (Tcf) of the nearly 9 Tcf of natural gas produced in the Appalachian Basin that year.  And as Ventura explained,

“The growth in our GDP and economy has been driven by energy. Natural gas has given a rebirth to the value-added metal, energy, and chemical industry clusters, expanded our transportation logistics and health care industry clusters, cut our unemployment rate in half, attracted over $400 million of private investment, driven up worker pay rates to the highest levels we have seen since 2008, and fueled a construction industry that has our region growing construction jobs faster than other metro area in the country.”

All told, the state had the highest economic growth in the country in 2017 as a direct result of the shale development taking place regionally. As EID recently explained, the numbers pretty much tell the tale, as in 2017 West Virginia saw:

West Virginia is a prime example of how game-changing this industry has been for the region. And as more investment dollars flow into the Appalachian Basin for shale development and related activities – the CEA report says pipeline investment in West Virginia alone has been over $16.7 billion – these benefits are only going to get better.