“… Overall, the estimated monthly bill for commercial customers has dropped by nearly 50 percent compared with the recent peak year of 2008 when the customer bills averaged $742 per month.”

In fact, the report shows that as natural gas use in the commercial sector — which is defined as non-residential, non-manufacturing and non-agricultural entities of the economy — has gone up 10 percent over the last decade, natural gas utility bills have dropped to their lowest level since AGA began tracking such bills in 2003, as the following graphic from the report illustrates. 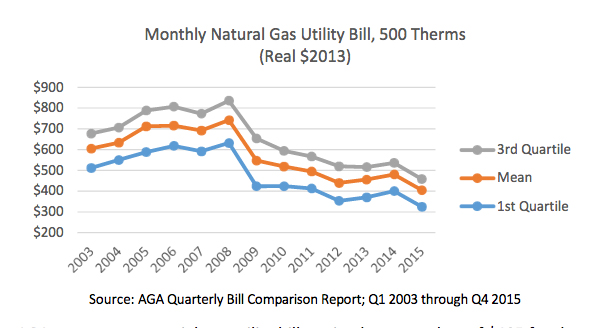 The report also finds that natural gas prices for commercial customers are the lowest they’ve been in more than 40 years, as the following report graphic shows. 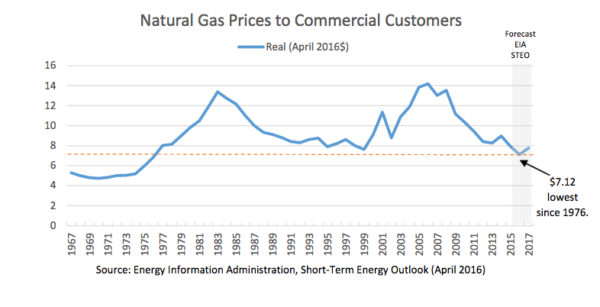 This is significant in the overall economic picture for several reasons. There are over 5.4 million commercial customers of natural gas in the country, ranging across diverse industries from healthcare and education to hospitality and financial services, according to the AGA. These commercial consumers use one-fifth of all energy consumed in the United States and six times as much natural gas as residential customers. Though electric power generation is the leading consumer of natural gas at 39 percent, a lot of that electricity ends up being used by commercial entities as well, as 61 percent of all energy consumed in commercial settings is electricity.

“Gas utilities serve many different customer groups, thus generating economic value-added from natural gas sales. Commercial customers benefit from lower commodity prices, which in turn generates further economic value. These contributions can be quantified by different segments of the economy that interconnect with natural gas utilities as a service provider.”

And thanks to hydraulic fracturing, the U.S. commercial sector’s energy outlook continues to be bright. The U.S. Energy Information Administration (EIA) projects that expected continued commercial sector growth will fuel increasing consumption over the long term through 2040. At the same time, the abundance of U.S. shale is expected to keep pace, meaning that commercial entities can rely on safe, secure and affordable natural gas for their business needs.

Looking ahead, the AGA expects that the costs of energy will continue its long-term decline for commercial clients. At the same time, consumption is set to rise, as commercial sector businesses add floor space in the future. This overall trend bodes well for both energy producers and commercial consumers. The energy industry can expect steadily increasing commercial demand, while the commercial sector will reap the rewards of affordable natural gas, as depicted in the chart below. 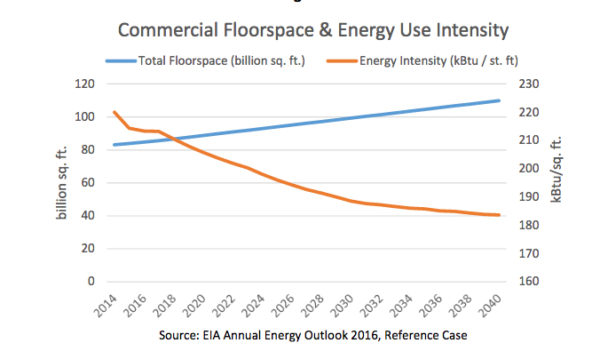 This expected growth means that natural gas infrastructure is going to be vitally important for commercial actors, and several states have already taken notice. The state of Mississippi, for example, is moving to incentivize gas utility company investment in natural gas infrastructure for commercial, industrial and manufacturing sites. The AGA reports that the Mississippi Development Authority, Public Utility Commission, and Public Utilities Staff are all collaborating to find ways to make natural gas more accessible for commercial entities. Likewise, Tennessee has enacted legislation recently to expedite regulatory reviews and cost recovery for investments in infrastructure replacement and expansion.

As EID has highlighted before, abundant and affordable natural made possible by fracking has resulted in tremendous benefits for the the U.S. electrical generation and manufacturing/industrial sectors, as well U.S. households. And as this report confirms, the commercial sector is enjoying similar benefits as well.